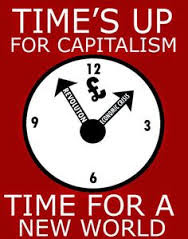 We have seen that the capitalists all over the world try to find a way out of the pandemic and global warming or themselves by throwing the burden of the crises upon the workers through wage-cuts, reductions in social insurance, speed-up in industry, lengthening of working hours, and by intensifying their competition against each other through trade wars, etc., and by engaging the world a  blood-bath of wars. The capitalists have developed a whole series of additional “remedies” to cure the economic weaknesses of capitalism and to shield themselves from their effects.

Every new decade a “new capitalism” is hailed as ushering in a new era. Its proponents declared that it provided the way to liquidate the conflict between capitalist production and exchange, and that, consequently, it had solved the tormenting cyclical crisis. The “new capitalism” is to abolish poverty, to do away with the class struggle and to open up an endless perspective of industrial development. Its champions boastfully declare Marx disproved and that there never will be a revolution. What a sad awakening is always in store. The capitalist dreams turn into nightmares. Capitalist recessions and economic crises are upon us again and with more devastating effects than ever before. This  “new capitalism” proves to be very much a part of the old capitalism.  It was all a sham and a delusion. In fact, capitalist economic “plans” are not plans at all, in the sense of a fundamental control of the whole resources and production of society.

The implications of all this are clear: to escape the encroaching capitalist starvation and to emancipate themselves, the workers of the world must and will take the revolutionary way out of the crisis. That is, they will carry out a militant policy now in defence of their daily interests and abolish capitalism and establish socialism  and by “abolition” of capitalism we mean its overthrow.

Capitalists perform no useful function in society. Their rake-off from industry and the land is sheer robbery.  They are a deadly detriment. The first requirement for further social progress is to abolish this class of parasites. The capitalist financier has come to be no better than an idle wheel in the economic mechanism, serving only to take up some of the lubricant. The capitalists, with their program of mass poverty, exploitation and war, are a menace to humanity.

The setting up of a socialist system will greatly increase the productive forces and production itself. By liquidating the contradiction between the modes of production and exchange, it does away with economic crises, with all their waste and loss. Where there is no capitalist class to demand its profit before production and distribution take place, and where the producers as a whole receive the full product of their labour, there can be no economic over-production and crisis.

Consequently, unemployment, with its terrible misery and suffering, will become a thing of the past. The many millions who now walk the streets unemployed will have fruitful work to do, to the benefit of all society. With the deadly limitations of the capitalist market removed, the road will be opened to a virtually unlimited expansion of industry and mass consumption.

Socialism will result in an enormous increase in industrial and agricultural efficiency. The socialist system of planned production, based upon common ownership of industry and the land, is incomparably more efficient than the anarchic capitalist system founded upon private property, competition and the exploitation of the workers. Socialism will wipe out great waste, inherent in the unplanned, competitive capitalist system. It will liquidate the hundreds of useless and parasitic occupations and whole tiers of government bureaucrats. It will turn into useful social purposes the immense values consumed by these socially useless elements. Capitalism blames crime upon the individual, instead of upon the bad social conditions which produce it. Hence its treatment of crime is essentially one of punishment. But the failure of its prisons, with their terrible sex-starvation, graft, over-crowding, idleness, stupid discipline, ferociously long sentences and general brutality, is overwhelmingly demonstrated by the rapidly mounting numbers of prisoners and the long list of terrible prison riots. Capitalist prisons are actually schools of crime.

Socialism will also conserve the natural resources of the country which are now being ruthlessly degraded in the mad capitalist race for profits. Mankind is by nature a gregarious and friendly animal. We do not make war because we dislike others of our own species, differing in language, religion, geographical location, etc. Wars have always arisen out of struggles over the very material things of wealth and power. This is true, whether humanity has been living in a tribal, slave, feudal or capitalist economy, and whether it has obscured the true cause of his wars with an intense religious garb or with slogans about making the world safe for democracy. The cause of modern war is the policies of the capitalist nations to rob foreign peoples in the world struggle for markets, raw materials and territory. In a society in which there is no private property in industry and land, in which no exploitation of the workers takes place and where plenty is produced for all, there can be no grounds for war. The interests of a socialist society are fundamentally opposed to the murderous and unnatural struggle of international war.