This is the Socialist Party 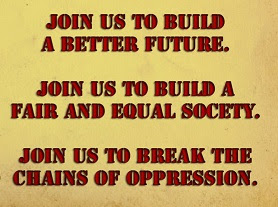 The working people of the capitalist countries live in such conditions that, increasingly, they realise that the only way out of their grave situation lies through socialism. Every worker, embittered, disappointed, confused, and bewildered by the capitalist chaos around can find a clear philosophy and confidence which comes from understanding the principles of the Socialist Party. The World Socialist Movement does not consider itself a sect or faction with interests separate and apart from those of the working class as a whole. Its interest is in articulating the long-range experience and historic aims of our fellow workers. It makes no pretence at holding a patent on Marxist thought. Its contributions are offered freely in the best spirit of international comradeship.

In the words of Rosa Luxemburg:

“Socialism will not be and cannot be inaugurated by decree: it cannot be established by any government, however admirably socialistic. Socialism must be created by the masses, must be made by every proletarian. Where the chains of capitalism are forged, there must the chain be broken. That only is socialism, thus only can socialism be brought into being...The masses must learn how to use power by using power. There is no other way.”

She echoes the most fundamental idea of Marx: the workers must emancipate themselves. The  task cannot be left to some other force, called ‘the Party’ or ‘the State’. The most pressing task is to emerge from the anarchy of capitalism to socialism. The cost of delaying this task will be recessions, social stagnation and slaughters on a global scale. To these has now been added the hazard of environmental destruction which could wipe out all the higher forms of life. It has become a life-and-death question for working people to construct socialism. A generation of youth armed sufficiently with socialist theory would signify the finish of the capitalist system. With an understanding of why they have rebelled against the social system into which they were born and how they must go about changing that system, the new generation will prove invincible. May the Socialist Party help the youth to seize the unique opportunity which is theirs—the greatest task in the history of humanity, the establishment of world socialism.

The Socialist Party strives in collaboration with the world working and toiling masses to abolish classes and build the World Socialism. The Socialist Party works towards the complete victory of the social revolution of the working class and the introduction of the cooperative commonwealth in its entirety. It believes that advances in human society so far in the economy, science, technology and standards of civil life have already created the material conditions necessary to set up a free society without classes, exploitation and oppression, i.e. a world socialist community and that the working class on taking political power must introduce this and establish a political structure based on people's direct and permanent participation in political power. Exercise of power at various levels, from the local up to the national level, has to be carried out by people's own councils, acting as both legislative and executive. All political and administrative organs and posts in the country are to be elective and revocable whenever the majority of the electors so decide.

Human equality is a central concept in socialism and a basic principle of the free socialist society that must be founded with the abolition of the class, exploitative and discriminatory system of capitalism. Socialist equality is a concept much wider than mere equality before the law. Socialist equality is the real equality of all people in economic, social and political domains. Equality not only in political rights but also in the enjoyment of material resources and the products of humanity's collective effort; equality in social status and economic relations; equality not only before the law but in the relations of people with each other. Socialist equality, which is at the same time the necessary condition for the development of people's different abilities and talents and for society's material and intellectual vitality, can only be realised by ending the division of people into classes. Class society by definition cannot be an equal and free society. Our struggle for equality and elimination of discrimination in the existing capitalist societies is an integral part of our wider and basic struggle to advance the social revolution and set up an equal and free socialist society.

As long as capital dominates human society, as long as people have to sell their labour-power to the owners of means of production and work for capital in order to make a living, and as long as the system of wage-labour and the buying and selling of human labour-power survives, no labour law, no matter how many clauses it contains in favour of workers, will be a truly free labour law — a workers' labour law. The workers' true labour law is the abolition of the wages system and the creation of a society where all contribute, voluntarily and according to their abilities, to the production of necessities of life and the welfare of all, and share in the products of this collective effort according to their needs.

The Socialist Party calls on the working class and all those who share the party's aims and objectives to join it.