Capitalism or Socialism? The Coming Showdown 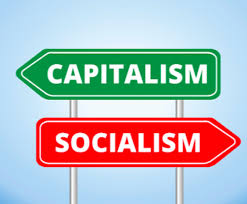 With the conflict in Ukraine, the great threat of a new world war hangs over mankind, but at the same time, the chances for revolution are becoming clearer. Capitalism has never been so prostrated as now by its own sharpened contradictions. The dawn of socialism, created by the masses and for the masses, is rising on mankind’s horizon. Let the socialist dawn inspire us all. In the whole world, power will pass into the workers’ hands, ending forever all misery, dictatorship and war. The victory of the world revolution will put an end to all exploitation, all oppression and all violence among mankind. Workers of the world awaken before it is too late. The future is in our hands. We shall overthrow capitalism.

Capitalism has no solution. Why? Because capitalist monopoly cannot organise production for use. The most the capitalists can see is to wait amid the general misery until the universal stagnation, destruction and stoppage of production have produced such a vacuum that a feeble “demand” will again arise, beginning a new trade cycle, and leading to a new and greater crisis. But of any attempt to organise the growing productive power to meet human needs — the question does not even enter into their heads; it cannot arise within the conditions of capitalism.

Many would-be reformers of capitalism (including the Labour Party) urge that if only the capitalists would pay higher wages to the workers, enabling them to buy more of what they produce, there would be no crisis. This is utopian nonsense, which ignores the inevitable laws of capitalism — the drive for profits, and the drive of competition. The drive of capitalism is always to increase its profits by every possible means, to increase its surplus, not to decrease it. Individual capitalists may talk of the “gospel of high wages” in the hope of securing a larger market for their goods. But the actual drive of capitalism as a whole is the opposite. The force of competition compels every capitalist to cheapen costs of production, to extract more output per worker for less return, to cut wages.

In the capitalist world, the standards of the workers go steadily down. Real wages fall. Social services are cut. Hours and conditions of labour are worsened. Capitalism can only seek to prolong its life by throwing the burdens of the crisis onto the workers, by ever-renewed attacks upon workers’ standards.

“But these inventions and discoveries, which supersede each other at an ever-increasing pace, this productiveness of human labour, which increases day by day at a hitherto unheard of rate, finally creates a conflict, in which the present capitalist system must fall to pieces. On the one side, immeasurable wealth and a surplus of products which the purchasers cannot control. On the other, the great mass of society proletarised, turned into wage workers, and just on that account become incapable of taking possession of that surplus of products. The division of society into a small over-rich class and a large propertyless working-class, causes this society to suffocate in its own surplus, while the great mass of its members is scarcely, or, indeed, not at all, protected from extreme want. Such a condition of things becomes daily more absurd and unnecessary. It can be abolished; it must be abolished. A new social order is possible, wherein the class differences of to-day will have disappeared, and wherein — perhaps, after a short transitional period, of materially rather straitened circumstances, maybe, but morally of great value-through the systematic use and development of the enormous productive forces already in existence (with equal obligation upon all to work), the means of life, of enjoying life, and of developing all the physical and mental capabilities, will be at the equal disposal of all in ever-increasing fullness.” (Engels: Introduction to Marx “Wage-Labour and Capital,” 1891.)

Many workers placed their hopes in the Labour Party to bring the solution. They have seen the need for basic social change; the Labour Party spoke of basic social change, of socialism, and promised to realise it. Understanding the role of the Labour Party right — this is the first necessity for the workers to advance to real working-class politics, to the workers’ revolution, to socialism. Do they not profess the aim of socialism? Yes, they profess the aim of socialism as an ideal for the future. But at the same time as they profess the aim of socialism, they attack the necessity of the workers’ revolution, which alone can realise socialism, they expel from their ranks the militant workers who fight for the workers’ revolution. They profess to hope to reach their aim without the necessity of fighting and overthrowing capitalism, on a basis of co-operation with capitalism, on a basis of winning for the workers gradual gains within capitalism. Therefore their practice is based on capitalism, on acceptance of the capitalist State on administering capitalism and helping to build up capitalism. This they term the “practical” policy for the workers. What is the outcome of this policy? As we have seen, in the period of flourishing capitalism, reformism was able to win small gains for the workers, and on this basis to hold them from the socialist revolution, hold the workers to capitalism. But this basis is ended. Capitalism to-day is no longer willing to grant concessions to the workers, on the contrary finds itself compelled to withdraw existing concessions, ,make new attacks, to worsen conditions. And therefore the role of reformism, which is the servant of capitalism in the working-class, changes. The role of reformism inevitably becomes to assist capitalism to attack the workers, wage cutsenforce wage-cuts, repress the workers’ revolt, to worsen conditions — all in the name of “practical” policy. This has been the role of Labour Governments. Millions of workers are turning from the Labour Party and seeking a new direction. Where shall they turn? The only path forward is the path of struggle against capitalism, the path that leads to the social revolution, to socialism.