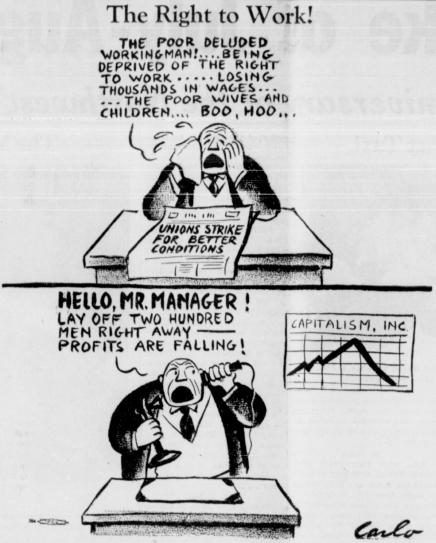 It is the need for food and a house to live in, that forces men and women to sell themselves to work for a boss for wages. Where land is free, food abundant, shelter available and clothing still a matter of ornament, men and women are practically free economically. It is the private ownership of land, food, clothing and houses that makes slaves of the non-owners. They are forced to work for wages to get money to buy these necessities. Everywhere we find that capitalism grabs up the land and other natural resources so that people are forced to find jobs in order to live. Is there any working man or woman who does not know that something is very wrong with things as they are today? No matter how hard we may work and save, we rarely make ends meet.

The sole end and aim of the employer are to make PROFITS. No matter how much the bosses may say in the media, you know that they consider everything connected with the business to bring MORE PROFITS to them. They install automation because it will enable them to reduce staff and thus make more PROFITS. They adulterate food with toxic preservatives to make it appear fresh all for the sake of paying more dividends to their shareholders.  If you stop to think about it you find almost everything in the world today and almost every institution directly relates, in one way or another, to PROFITS.

When you go on strike with for shorter hours and higher wages, the boss opposes you, because higher wages and shorter working hours for YOU will mean lower PROFITS for HIM. You’ll hear the politicians teaching contentment and thrift because the rich men pay their salaries and the master class want you to be contented and obedient. These things mean more PROFITS for him. The politicians always line up behind the Captains of Industry instead of behind working men and women. It PAYS better. The media never tell the truth about a strike. They always side with the employers because the employers advertise and advertising means PROFITS.

Employers need the unemployed in order to make profits almost as much as they need workers. We are today unable to name the price at which we will sell our strength, or our brains, to the boss because there are unemployed men and women who are offering their brains and muscles just enough to live on. If we demand higher wages or shorter hours, they will undersell us and get the jobs. This is how the employers use the unemployed to keep our wages down, and it is by keeping wages down that they are able to draw profits from the shops and mills.

Can you blame someone whose children are crying for food or to pay the rent to keep a roof over the family’s head is willing to work on your job for a bit less than you are getting? You may find yourself in the same fix week after next. Somebody desperately looking for work is precisely the same kind of human being as you and I.  That is how the boss uses the out-of-work against us and against themselves. You are always competing for jobs with the unemployed whether you realize it or not. And you must stop competing with them and begin to realize your need for them and their need for you. We must organise and cooperate with the out-of-work against the employing class.  We must stand by the unemployed in order to have them stand by us. We need the cooperation of our out-of-work comrades and hereafter we must organize with them to present a united front against the boss.

Profits are the cause of poverty. And the Socialist Party proposes to abolish poverty. This is why every workingman and woman ought to be a socialist. Because the bosses own the factories, they are able to buy your working strength for less than the value of the things you produce or make. This leaves a profit for the bosses. Socialism intends to make the factories,  the common property of those who work in them; to do away with bosses and to abolish the PROFIT system. The socialist movement is the only movement in the world composed of workers who mean to abolish poverty and the profit system. There is no member of the Socialist Party who waves the white flag of truce to the capitalist class.