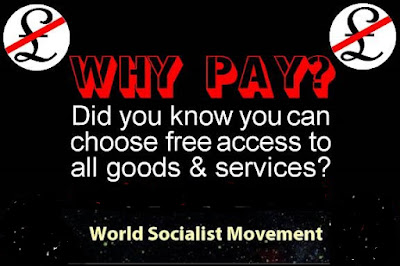 What a waste of the ingenuity and skills of the computer analysts, programmers and software and hardware engineers. All these digital algorithms are being designed for one purpose: to allow those with money to access it and to deny those without wealth in a society based on private property and buying and selling. Another example of how today under capitalism scientific knowledge and technology are prostituted and used to serve anti-social ends.

In a rationally-organised society, where we produced goods to satisfy the various needs of people and where people had free access according to their individually-defined needs to what had been produced, the same technology could be used to set up and operate the efficient system of stock control that would be needed to ensure that the stores were always stocked up with the products people had indicated they wanted.

The economists tell us that property and buying and selling are inevitable because of the scarcity of resources — because there is not enough wealth to go around, there has to be monetary rationing. This would be a good reason for the existence of money were it true, but as it is evidently false we must dismiss it as yet another example of the confusion of the experts of the economics text-books. We are now surrounded by a capacity to produce an abundance of wealth

It is at this stage in the argument that the economists bow out of the argument the psychologists step in. “Fair enough’’, they admit, “we are prepared to accept that there is no economic reason for money rationing.” The real reason money is needed, they say, is because without such rationing we would all take more than we need. Greed becomes the reason to oppose a money-free society. However, it is a product of a system in which private property exists. Imagine if everyone was given unlimited money to spend on what they liked—but for just one day. Of course, the stores and the shelves would be emptied, with people hoarding provisions in anticipation of the coming day when their wage packets would once again restrict their spending. So poverty, or the expectation of poverty, breeds a desire to not only obtain enough to survive but to obtain more than your poverty allows you. The desire to escape poverty under capitalism is labelled greed.

Now think about a money-free society where all goods are freely available. Will people take more than they need when they know that wealth will be there for the taking whenever they want it? The psychologists, with their minds contaminated by the conditioned behaviour of property society,  conclude that always men and women must act as anti-socially as we are forced to now. Yet it is not “human nature” that stands in the way of a money-free society, but our consent to the continuation of private property. When we wage slaves to get rid of the institution of property, money will have no more use than gas lighting in an age of electricity. Exchange will have no meaning when there are no property rights to pass from one person to another. When the community commonly owns and democratically controls the means of producing and distributing wealth, there will be no non-owners to buy things from or sell things to, to steal from or to give to. Wages will be replaced by cooperative labour; classes will be replaced by social equality; money will be replaced by free access to all wealth. The richness and beauty of the world are there for enjoying. We have always argued that many workers would arrive at conclusions similar to those of socialists on their own, without encountering socialist speakers or publications.

The basic causes of problems should be attacked, not just the symptoms. For the Socialist Party, it is the pursuit of profit which is responsible for the ills of society—for gross inequalities, for the bloodshed of war, for the waste of production, for people's need to obey and conform. Our alternative is a system without money or the profit motive, based on cooperation not competition, with work done by volunteers. We counter the “lazy person" argument by pointing out that there would still be plenty of motivation to work in a society where people would be cooperating to produce the best possible, free of stress and worries. Without useless pointless jobs and the waste of wars and so on. it would be possible to produce an abundance of goods, for people to take as they wish.