The Cause of War 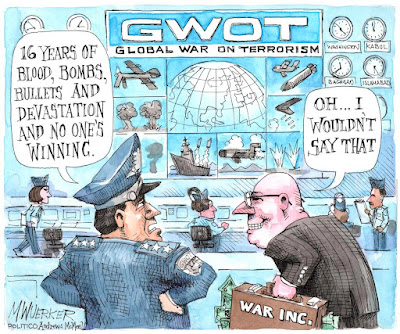 The profit system is the cause of all wars today. The capitalists in Germany, America, England, France, China and Russia – all want to seize, or to hold, territory in foreign countries. They want to have an army and navy in order to protect these foreign investments – from the armies of the capitalist government of other countries. Wars are caused by the competition of various national capitalist groups for new markets, new natural resources in undeveloped countries, for new, protected foreign. investments. Each national capitalist group wants the strongest military to protect their industrial and financial invasion in new territories.

Every thinking working man and woman is opposed to all capitalist wars. We are opposed to ALL armies and navies. We object to having one life sacrificed to the interests of the capitalist class. The capitalist etalks patriotism and the flag when he wants to use you to fight his battles against other capitalists. But he will out-source and off-shore production where there are workers who will work for the lowest wages, be German, French, English, Japanese or American. He exploits you, dismisses you, permits you to starve regardless of your nationality. In every land he makes new laws, or evades old ones.

Emplyers only emphasise your nationality when he needs you to fight wars against other people, who are also fighting for new markets for the employing class of the foreign land. Workers  of all countries have no fight against each other. Their interests are common. Their only enemy is the capitalist who exploits them. The employing class is at present making all the rules in the game and every one of these rules is to further their interests at the expense of all others.

We are opposed to ALL armies, always have been, and always will be. We want NO army because these will not only be used against us today but will successfully crush any rebellion or revolution on the part of our class in future. The only foreigner we know is the boss who exploits us, whether he be German, English, Chinese or American. All workers are our countrymen. The capitalist is our enemy.

Socialism will prevent wars because it means the ownership of the instruments of production and distribution by the workers who use them. It means the abolition of the Profit System.

The way to cure a disease is not to put salve upon the symptoms, but to remove the cause. The profit system is almost the only cause of war today. Discard the system and remove the cause of war. The profit system is the cause of nearly all the suffering poverty, sickness, crime, as well as war. It is the one great enemy of the working class. Amidst the horrors of famine, poverty, crime and war there is one way out for the working class of every country. There is one way that means victory for the useful workers of that country. That way means socialism or industrial democracy.

The only war worth fighting is the class war, the war of the workers against the robber class. The abolition of the profit and wages system is the only fight that will benefit US.  The ruling class has always used the exploited workers to help fight its battles.

All power lies in the hands of the workers. You can make the whole world your world with a united working class. But you must have an educated, organised class. The class war will have to be FOUGHT OUT. And every act of rebellion and revolt will make us better fighters for the overthrow of capitalism, fighters with weapons tried and found effective.