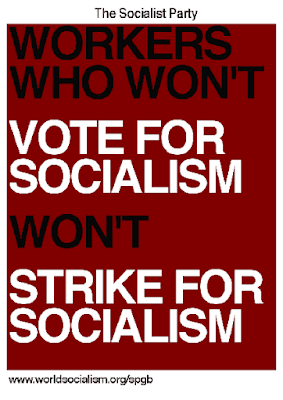 Building a sustainable future will require the end of capitalism and the creation of world socialism.

Stripped down to the basics, the reformist critique of inequality can be described as the rich are rich because they are rich, and the poor are poor because they are poor, and will remain poor until they get more.

Capital is money invested in land, buildings, machinery, tools, raw material, labour power, for the purpose of returning a surplus; and the only source from which this surplus can come is the unpaid labour of the wage worker. Capital, therefore, is wealth used to exploit wage workers.

Capitalists are rich because they own the means of wealth production, and consequently the resultant product; and the workers are poor because they possess nothing but their labour-power, which they are compelled to sell to the capitalists in order to live. As the value of labour-power is determined by the cost of its reproduction, that is to say, the necessary food, clothing and shelter to enable the worker to maintain oneself in a fit state to do a job, and reproduce by supporting a family, increases in the wealth produced are of benefit, primarily, to the capitalist class.

The essential features of capitalism are:

1. the ownership of the means of wealth production by a propertied class which lives by owning;

2. the sale of their labour-power by the property-less majority for salaries or wages;

3. the production of goods for sale.

The Labour Party does not propose abolishing these essential features of the capitalist economic system. We say that only with socialism will the poverty and insecurity of the workers be brought to an end. The risk of war will be removed only with the removal of the commercial rivalries of capitalism. The Labour Party programme will fail, not because of the personal merits or demerits of its leaders, but because it is wholly a programme of reforms of capitalism.

The Socialist Party alone has seen that there must be socialists before there can be socialism and acts on it. Socialism can only be achieved by the success of the working class in its struggle against the owning class. The World Socialist Movement is built upon the facts of this class struggle. It is useful and necessary therefore to learn what the class struggle really is and the field in which it is carried on.

Our capitalist opponents allege that we socialists make the struggle ourselves by appealing to class hatred and stirring up discontent which should be left undisturbed.

The fact that society is made up of owners of property and those who practically have no property, naturally leads each section to take action to protect its interests. Owners of wealth seek to hold on to their possessions and add to them. The working class, own no wealth as a class and is compelled to take action to protect their interests as a working and dispossessed group of men and women.

The interests of the workers every day is to live as well as they can while employed by the owning class. Naturally, the interests of workers and owners clash, because the owners employ the workers to get a profit or surplus out of the work done, and the smaller the proportion given to workers as wages, the more there is left for profits.

The workers must seek masters and obtain the best terms for the sale of their working powers. The whole working life of the working class means that they are engaged in the class struggle, a struggle to uphold the interests of their class in the daily conflict with employers.

It does not depend upon the workers’ state of mind, ignorance or alertness. The struggle is bound to exist whether it is recognised or not. The existence of a body of the population with no means of living but of working for the group of owners —that fact alone denotes a class struggle. The workers cannot take action to seek work and wages without displaying the conflict of interests between them and employers, and the inevitable struggle that is involved in it.

The continual struggle about hours and wages seems to some to be petty and ineffectual, and they, therefore, deny that these daily struggles of trade unionists and other workers are a part of the class struggle. But these never-ceasing battles over details of wages and hours are the actual result of the conflict of interests and are inseparable from the struggle of the working class to live as wage slaves in a society which allows them no other way of living as a class.

The field of industry is therefore a battleground of the class struggle, but it is not the only one. Around the question of “the job,” and job conditions, the workers are always compelled to struggle, and always will be while there is a working class dependent upon employers for existence. The changes in hours and wages always taking place never destroy the power of the employers over the workers. Through all the variations of hours and wages, there is but, on average, a subsistence wage for the worker, with rapid exhaustion of his physical powers. The economic battleground of the class struggle is limited to guerrilla warfare, with no chance of a victory for the working class.

In the industrial field, the power of the workers to fight the employers is small to-day. The workers have practically no savings, and cannot stop work for long. To withhold their labour-power from the employers is in most cases to simply postpone their surrender.

The workers cannot stop the use of modern wages-saving technology. Almost every step in industrial development throws the scale heavily against the workers, who in spite of the long strikes and lock-outs are eventually defeated.

Trade unions, too, have helped to keep alive a narrow, sectional or trade outlook among the workers and do not easily promote a class outlook. It takes much time for the various branches of workers to realise that the competition and conflict among themselves is itself a result of the position of the working class. The workers do not quickly grasp the fact that they are driven to compete with each other because the economic system of to-day reduces each worker to a seller of merchandise (labour-power) in a market where there are fewer buyers than sellers.

Where is the sinister and powerful factor which plays so much havoc with the workers’ efforts to fight for better conditions? That factor is the labour leader who, for the sake of careerism or to earn the goodwill of the employers—side-tracks the struggles of the worker into blind alleys and trusts in the employers.

The employing class maintain their supremacy in the struggle because they have control of powers which enable them to defeat the workers. That power is political. How are the great strikes of our time smashed? Not because the employers rely upon economic means, but because they make use of the law at the disposal of the political rulers. Every Emergency Powers Act, Trades Disputes Act, and prosecution of strikers shows where the real power lies.

Beyond the mere victory in a strike, the employers have the wider and permanent victory of being still in control and possession of the means of production, etc., and that is why they so carefully and strenuously seek to retain control of the political machine.

The real success in the class struggle by the workers can only be secured if they are able to obtain control of the machinery by which the employers at present dominate. That is if the class struggle is to be waged victoriously by the workers they must win political power, and thus get the machinery in their hands to put an end to capitalist ownership.

The economic battlefield of the class-struggle is one therefore where the workers are bound to continually struggle within capitalism for a bare existence.

The political battlefield of the class struggle is the only battlefield where the workers can finally win and abolish the struggle altogether by abolishing classes and capitalism altogether.

Necessary though it is that the workers should struggle on the economic field, the most important battleground of the class struggle is on the political field. But they must become conscious of their class interests—they must fight for socialism.