Towards a Socialist Future 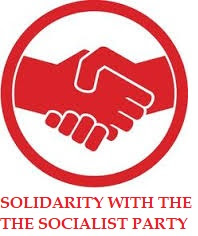 The ruling class and their governments can trick and deceive the people by relying on our short memories. No matter how careful the capitalists and their apologists may be, the inconsistencies of the present economic system constantly are revealed. The world is engaged in some of the bloodiest and most destructive wars in history. People fear another world war which may be a nuclear exchange. What has happened to the peace which we were assured would be ours with the end of the Cold War? The people were not only promised peace, but also security, and freedom from fear and from want. Where is this security today? The promises made to us were fraudulent. The United States has the largest military budget in its peacetime history and more and more billions of dollars are added to it every few months. It is pouring still more billions of dollars into militarizing and arming countries around the world. Russia is likewise preparing for war. Its great and long-suffering people are still held under a totalitarian ruling class which has now tried to add Ukraine to its empire. Each side, in its own way, is telling the truth about the other. But even if only half of what they say about each other is true, they stamp themselves as criminal fools or criminal liars. If the people are to live and prosper, capitalism must be ended.

The Socialist Party is not organised for the purpose of relieving the more or less obvious results of poverty. Our object is to abolish the cause of poverty, not to waste our time and energies in futile attempts to mitigate some of the more glaring effects.

Many workers have yet to hear the socialist case, but our efforts to enlighten them are severely restricted by our meagre resources. We need support to enable us to carry on the struggle for socialism. The Socialist Party calls upon fellow workers who sell for wages the only commodity that they own—an ability to work—to consider its case—the case for socialism. Consider your position as a member of a class that is sweated in industry and bled in wars; consider the poverty, misery, disease, and slum life of your fellow workers and class consciousness—not leaders—will enable you to capture the control of the machinery of government and thereby the means of producing and distributing the wealth that will allow us to live like men. The alternative is existing like slaves.

The outstanding social problem of our age is poverty. It exists side by side with great wealth and affects the employed as well as the unemployed. It is the result of the private ownership by the capitalist class of society’s means of producing and distributing wealth. The facts of this concentration of ownership in the hands of a small minority of the population are well enough known.

The Socialist Party has been telling fellow workers for years, not merely that the Labour Party do not believe in socialism, but that they are an organisation which hopes and attempts to reform capitalist society, neither understanding the basic structure of capitalism which it wants to modify, nor socialism which it claims as its objective. The Labour Party can govern and can administer capitalism— only in the interests of the capitalist class. Past Labour governments are ample demonstration of this. The Labour Party can govern; it can and must make promises which induce the electorate to give it support—but can it keep them?

The problem with the working class is the modesty of its demands. It could organise the economic and political life, not in the interests of the employers, the profiteers and the bureaucrats, but in its own simple interests of all the people, who want to oppress nobody, to exploit nobody, to war on no other people. It could organise production not for the profit of a handful of capitalists but for the use and enjoyment of all. It could build homes, instead of bombs to destroy homes; provide for the health and welfare of all, instead of for the destruction of nature. It could set such an example of democracy that no tyranny could withstand the uprising of its own slaves. For this, the working class needs nothing but an understanding of the task and the political power to perform the task. Up to now, however, the working class has been content to leave its fate in the hands of the leaders of the parties of capitalism.

Up to now, however, the working class, and especially the organised labour movement, has been content to leave its own fate and the fate of the nation in the hands of the twin parties of capitalism. We seek nothing more than to be part and parcel of its loyal socialist wing because it will be our party no less than the party of the working class as a whole. We are convinced that great and stirring days are ahead. We are convinced that the working class will soon start its mighty stride along the road of independent political action in its own name and under the red flag. We remain socialists – independent socialists. We are independent of capitalism, of all capitalist governments, of all capitalist politics. We are democrats, consistent and thoroughgoing democrats because we are consistent socialists. The working class, and we as part of it, need democracy, widening and deepening democracy.