The dawn of socialism is rising on humanity’s horizon. 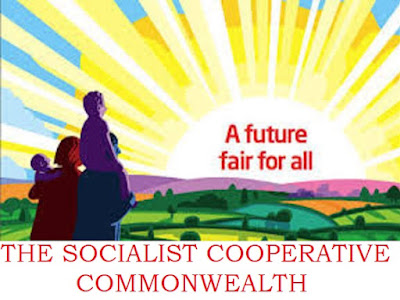 The future of humanity must not be decided by those in power, the bankers, the industrialists, the politicians, or all those who have taken the world through recurring economic slumps, bloodbaths of war and the destruction of our environment. Working people must organise, speak out and with one voice demand life under socialism before death under capitalism overtakes us all. A programme of planned production for the use of the people rather than for the profits of the owners of industry would bring an age of peace, plenty, and prosperity. This is already technologically possible. How can any sane person conceive of capitalism coping with the climate change crises? The only permanent solution to capitalist exploitation is the workers' revolution to establish a socialist future for humanity worldwide.  Workers must awake, and awake quickly, to the understanding of all the horrors of the capitalist system.

A capitalist economy produces goods for a market the limits of which are determined not by people’s needs, but by the ability to make a profit, and to re-convert, the profit realised into further production. It is impossible for the economy of any national capitalist state to be self-contained. In the first place, because of the uneven distribution of natural resources in the world, no nation contains all of the raw materials that it requires. Secondly, the effective consumer market in all advanced capitalist nations is never sufficient to absorb the total output of the economy, and markets must be sought outside the national boundaries. Thirdly, because of the limitations of the domestic market and the disproportions generated within every advanced capitalist economy, there is never a sufficient outlet for capital investments internally, and such outlets must also be sought elsewhere.

Goods and services are produced, not in order to satisfy human needs and wants, but in order to make as large a profit as possible. And so long as there’s a profit to be made, all sorts of anti-social products, including such things weapons of mass destruction are cheerfully produced. Socialism – or perish!

Only the working class, which suffers the cruelties of capitalism in peace and war, can deal the death-blow to this foul system. The workers can rally around their liberating banner and can change the world. Having abolished capitalism, they can harness the productive forces and the wondrous technology of science to the service of human needs, eliminating all poverty and raising the living standards of all peoples to undreamed-of heights. Hazardous and unhealthy occupations can become things of the past. The drudgery and servitude of ugly and unnecessary toil can be ended. There can be leisure and comfort for every man, woman and child on earth. We are certain that before long the world will witness the working people in all countries seeking to break once and for all the chains of exploitation and establish the truly free society of socialism.

The capitalists have not solved a single social ill. They have opened new sores. World capitalism, as a system of production for sale on a market with a view to profit, not only ignores needs that can’t be paid for, but it also distorts the pattern of world food production

Food, like everything else under capitalism, is not produced for use. It is not produced to be eaten but to be sold, with a view to profit, on a market, a local market, a regional market and, increasingly, the world market.

When there is production for the market it is only market demand, not a real need, that is satisfying and it is this that, in the context of food production, condemns millions of people in the world to go hungry or be badly fed and others to actually die of starvation. These people are malnourished not because it is technically impossible to produce enough food to feed the whole world’s population, but because the present world economic and social system capitalism produces only to satisfy profitable market demand and not human needs. It is as simple as that. These people don’t starve to death; they are starved to death, by capitalism.

Big Ag  will not invest in anything that is not profitable even if they are corporations with the best will in the world they are not free agents. They must, under the logic of the capitalist system and the laws of the market produce in countries that get the best possible return on investment. Undeveloped and developing countries are caught in a vicious circle. In order to modernise they must have funds to invest. How do they get these funds? By selling on the world market the crops that they are apparently best qualified to produce. This means forcing their peasants and farmers to stop producing to satisfy their own needs or local markets and turn to produce the cash crop in question. This in turn means that money has to be spent on importing fertilisers and food crops, paid for by the profits from the exports of the cash crops. And, if the price of the cash crop on the world market falls? Then they do not have enough money to import enough food and the world hears about a “famine” somewhere caused by some “natural” disaster. Famines are artificial in the sense that they could be avoided if we had a social system geared to satisfying needs rather than profitable sales.