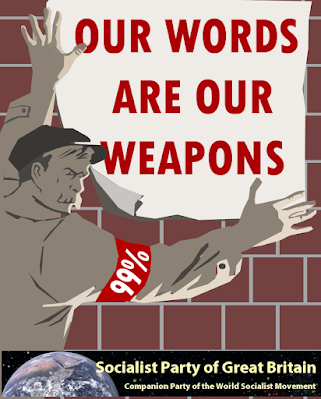 It will not be any one IDEA that will free the working class. But rather the common human needs of the workers, made acute by the breaking of old-time habits of life and thought. It is this breaking of old customs and old habits that create revolutionary INITIATIVE. Every movement gains MOMENTUM THROUGH ACTION.

We should encourage rebellious activity on the part of the workers everywhere and at all times. ACTIVITY always adds to the strength of the movement, and brings new workers into the ranks. We do not learn inaction through activity but how best to act in order to win. Action tested in the fires of experience finds the best tactic. Questioning in ANY organisation is a sign of life.

The working class is kept in a condition of wage slavery through its conditioning and indoctrination. Poverty cries out for the need of a new social order. All that stands between us and the things WE have PRODUCED, the houses we have built and do not occupy, the clothing we have made, the food we have produced, which we may not eat – all that separates us from these things, that belong to us, is our habits of inertia.

Capitalists pay the workers just enough to keep them in working conditions and to produce children to take their places when they can no longer be used at a PROFIT by the owners of industry. But the boss has GOT to give you a living while you are on the job, for when YOU STOP, PRODUCTION ALSO STOPS. As long as the profit system lasts you are going to get a living while you are at work, and that is about all you are going to get. If you get any more you will have to fight for it. You will have to fight to keep on getting what you receive now. Life is a constant warfare between the employers and the employed.

And there were hundreds of thousands of other propertyless men and women also looking for a master who would buy their strength and permit them to work in the shops and factories, making things for the shop and factory owners.

Because there were many men after each job, the bosses were able, and are still able, to buy our labour power for a wage that just about covered the cost of living. Now a wage means a part. For example, a miner digs $15.00 worth of coal in a day (for the boss) and the boss pays him $3.00 in wages or a very small part of the value of his product. And the boss keeps the product. And so we have the profit or Wage System.

The working class has no rights, no privileges, and no law. The working class has only the strength, the power of its two strong hands, of its sober mind, of its class solidarity. Labour feeds the world; it fetches and carries the food, the coal, and the clothing. It turns all the wheels of industry. The Law will not help us in a reign of lawlessness. Street barricades will avail us nothing today. But organization and education in the basic industries, in all industries – class solidarity – will help us. Industrial democracy means the rule of the workers as opposed to what we have known all our lives-the rule of autocracy or the rule of the capitalist few.

This is why we intend to abolish the profit system as the workers will themselves own and enjoy the things they have produced, there will be no poverty for any individual.  Class solidarity, and class organisation in the economic field will enable us at last to abolish a system that rests upon robbery.