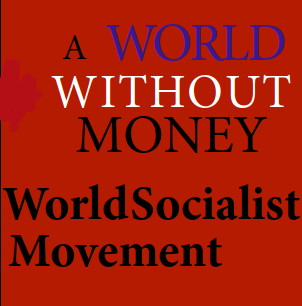 Those who meet with the Socialist Party’s proposition that goods and services should be freely available for people to take according to their needs often react by claiming that this wouldn't work because, first, nobody would want to work and, second, people would grab more than they needed so that shortages would again develop.

There are simple answers to these objections. First, the threat of starvation is not, and certainly should not be, the incentive to work. If some work is so unpleasant that nobody would freely choose to do it then it ought to be done by machines or rotated equally among all members of society and not imposed for life upon a few. Second, people only tend to be greedy under conditions of scarcity. If goods were freely available in ample quantities people would soon adapt to taking only what they need.

A money-free society is so obvious a suggestion for this age of potential abundance that it is not surprising that people should come to discover this quite independently of the activity of the Socialist Party. The money system is obsolete and anti-human that in years to come, with the increasing education and increasing misery of modern life, together with growing plenty, we can expect the abolition of money to be treated more and more as a serious issue, to be absorbed into more and more minds. Socialism won’t evolve automatically or gradually out of capitalism. Its establishment requires a decisive break — a political and social revolution — that will replace class ownership with social ownership. The movement for the abolition of money must be political because when we destroy money we destroy the basis of the power of our rulers. They are unlikely to take kindly to this, so we must organise politically to remove them. We must stop thinking of the money-free world as an 'ultimate aim' with no effect on our actions now. We must understand that the abolition of money is THE immediate demand. A practical proposition and an urgent necessity, not something to be vaguely 'worked towards'.

It is hard to envisage a world without money. It requires a considerable leap of the imagination to think of life without cash, prices wages or financial worries. From birth to the grave, workers’ lives are conditioned by money. Without it we starve; because of it we are poor; to get it we are forced into wage slavery; if we steal it we can be locked up. These days, those who pose as socialists, but in fact have no other purpose than to reform the capitalist system, are never heard to refer to the abolition of money.

The Socialist Party stands for a society in which the entire means of producing and distributing wealth will be owned by the entire world community. The resources of the earth will belong to everyone. No laws will exist to preserve the right of one section of society to use things and another section to be denied the use of them. World socialism will be a social order based on free access for all people to all the goods of the earth. In such a society, money would be an out-dated relic. Nobody will buy anything or sell anything or pay for anything. Those who cannot easily imagine such an arrangement should remember that people in pre-capitalist societies would have found our present social order equally difficult to comprehend. Those who have made the mental leap from the prison of the money system to the freedom of world socialism are urged to join us now in our struggle to create the society of tomorrow. The objective is urgent; we have waited for too long.

Unless you do have a clear idea of socialism then anyone can claim it, defame it and say it doesn't work. The Socialist Party critics say that we ]are utopian because we hold to the view that a new society is the only lasting solution to the mess we're in. “Yes", they say. "the world is heading for disaster, but it's better to try to make smaller changes than go all out for socialism and perhaps change nothing". Instead of succumbing to the prevailing view that things must carry on more or less as they are, we are called Utopians because we dare to suggest that we could run our lives in a much better harmonious way. From their perspective, we should limit ourselves to short-term changes such as changing interest rates or whatever. So who is being unrealistic? Socialism is no more than a description of the social conditions in which human talents can truly blossom. Unless we keep the idea of working directly for a worldwide cooperative commonwealth on the agenda people will always be sidetracked by every arrival of a new problem for capitalism. By describing how socialism would operate we simply point out how our potential could be realised if we used current know-how in a different way. None of this is Utopian.