What we seek is socialism 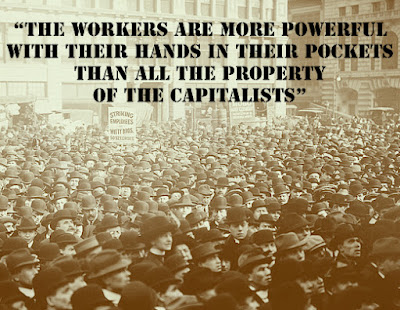 Our world is on the brink of an apocalypse—and yet it has implemented policies which avoid the root causes of our impending disaster. Without socialism, technological progress and the dream of a future of endless bounty is no longer tenable.

The workers are in the class struggle but are not conscious of their interests. Hence they fight, blindly and vainly to improve their condition. Inside the unions, in political parties and in their everyday actions they do things which work to the capitalists’ advantage. They continue to act on lines which perpetuate the system that enslaves them, and support men, measures and parties that work against the workers’ interests.

The workers must recognise that the class struggle exists. They must become aware of their slave position, and the way out, if they are to prosecute the struggle to a victorious conclusion for themselves.

If the working class become conscious of their class interests and welfare, they will refuse to take actions which injure them. The guiding policy for class-conscious workers must be: Will a contemplated action assist the workers to triumph in the class struggle?

With socialism the need for these national units to claim sovereign power over all internal affairs will have passed, just as city-states and other kinds of full local autonomy were rendered obsolete by the formation of the modern nations. We, the workers, are not the “Nation,” we are the slave class within the nation. The “Empire” and the trade routes are the private property of our masters; they form channels through which they dispose of the wealth of which you have been robbed and over which wars are fought and working-class lives sacrificed. We stand as socialists for the ending of capitalism and with it the noxious maladies it begets. Those who support capitalism through political ignorance are ever likely to be led into both voting and fighting for it while they remain in that mental state. Capitalism requires armed force, apart from military war. It is the final word in their political control over the working class. Capitalism cannot work to your benefit.

Socialist society, through its central organisation, will arrange for the production of goods where natural and man-made conditions are favourable, and will secure their distribution to the localities where and in the quantity required. Socialism goes to the root cause of working-class poverty. It lies in capitalism or the private ownership of the means of wealth production. By the substitution of common ownership you will ensure the leisurely enjoyment of the plenitude you now provide for others.

A  political party which aims at a social transformation of society, which is possible only by the consent and support of the great mass of the population—We not only believe but argue constantly that a socialist organisation which takes power other than with the will of the majority cannot bring about socialism even with the best of intentions. We insist with the greatest vigour that no “benevolent saviour” can lead to socialism. Such can benefit capitalism, and has but there is one kind of society that cannot be built that way, and that is socialism. We believe that because socialism is different from all other social systems in a very basic respect. Socialism means, if it means anything, that for the first time in the history of man. the mass of people are freed of class rule over them, that they take the stage of history on their own behalf and in their own interests. And this freedom from class oppression cannot take place unless they themselves act. It cannot happen if a utopia – even a well-intentioned utopia, let alone a totalitarian dictatorship, is imposed. It makes no sense to build a movement upon the advocacy of such ideas and yet to advocate overthrow of government by a conspiratorial minority or something of the sort.

A socialist  party cannot attempt while it is a minority to obstruct the carrying out of the decisions of the majority. As long as we do not enjoy the support of a majority – and the socialist movement unfortunately does not yet in this country – and as long as the opportunity exists to reach the ears of and convince such a majority by persuasion and conviction, we will continue to use every channel of persuasion and conviction open to us to gain that majority without which the achievement of socialism is hopeless. To do otherwise would be contrary to our socialist principles.

We do not put any confidence in the ruling capitalist group in this country. We do not give them any support because we do not think they can or will solve the fundamental social problems which must be solved in order to save civilisation from shipwreck. The workers must organise themselves independently of the capitalist political parties. They must organise a great party of their own, develop an independent working-class party of their own, and oppose the policy of the capitalist parties, regardless of whether they are called  Labour or Conservative, the Democratic or Republican, or anything else.

The handful of very rich who own and control the industrial wealth of the United States want no tampering with their property and their property rights. Any invasion of its private, privileged ground is what big capital fears.

We are socialists. We educate toward the replacement of the capitalist system of private profit by a democratic socialist society based on production for use. As democratic socialists, we are unalterably opposed, not only to capitalism, but to any form of what is sometimes called “state-capitalism” – the state should be raised to a position of absolute mastery over dehumanised human beings who are the de-personalised tools of an all-powerful bureaucracy.  It is as abhorrent to us as the capitalist private-profit system!. In one form it is once represented in the former Soviet Union or in today’s China are snot “some kind of socialism,” not even a bad kind; theey are nothing to what resembles.