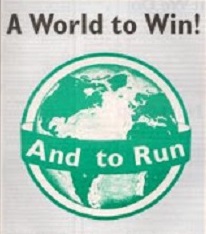 We live in a world of potential abundance for all, but we are trapped within a social system of mass deprivation. We know the world has the resources for all humanity to live comfortably. Therefore the question is why isn't the whole of humanity living comfortably?  The way society is structured will not allow human needs to be met. “Needs" are measured by the “market”. You can have anything you want, from baked beans to even human beings, as long as you can afford to pay for it. We know that what we need and what we can afford are not necessarily the same thing. Surely, the very fact that present society has the capacity for everyone to live comfortably but won’t allow this to happen is in itself proof that a new system is needed?

What exactly does the Socialist Party mean by “free access”? If "free access” is interpreted as saying that in a socialist society whatever you think you would like to have you can have, we would say that it does not make sense. In a socialist society, you will only be able to have free access to the things which society decides it will make available for free access. In modern terms, we would say it means this: everywhere you will have water and sanitation, education and health services, transport, housing, food and all of the things that people want. But human needs are not all the same all over the world. In a tropical climate, some things are different to what they are in a temperate or cold climate. So nor will it make sense to say that production all over the world will be administered from a centralised institution such as the United Nations in New York. As far as is possible, with some very important caveats, it is proposed that decision-making is left to local people to take the initiative in everything, that is in producing what they want and deciding how they are going to make those things available for free access.

Global bodies such as WHO or the FAO will function as centres of administration information. When people locally cannot produce certain things which are wanted, they communicate and coordinate with the central administration and they pass it on to the people who are able to do it. If there is a shortage of something in Ethiopia which can reasonably be produced in England, it will convey the details to the relevant English administration that would do what is necessary. In other words, you rely on local or regional initiatives and you don't have to have great centralised institutions which are going to organise all these things.

Having scrapped the present system of only producing goods and services if there is an expectation of profit for the parasitical minority who monopolise the earth's resources, socialism will forget the old rules of the buying and selling game (the market) and will distribute what is needed on the basis of free and equal access. Money will be abolished: you cannot buy from yourself what you commonly own. The satisfaction of human needs will involve people giving according to their abilities and taking according to their needs.

Free access means that no human being will need to buy anything. Anything that society can produce will be there for the taking. Healthy food; decent homes, the possible to build; gas, electricity, water; entertainment; all medical and educational services - all completely free and available for all. For far too long our needs have been influenced by the selling process and the crude mind manipulation of the advertisers. In a socialist society, we can begin to think about what we really require to be happy human beings and we shall set about supplying ourselves with the resources needed to live as fully as we can. Socialism will not only be able to satisfy our current needs, but it will enable us to question and challenge those needs - to escape capitalist consumerism.

Once the means of production are the common heritage of all and are under democratic control, then the profit motive and the price system can be abolished. Wealth can be produced solely for people to use. People can have free access to all the things they need to live and enjoy life. Goods will not be priced but will be available for all to take freely according to their needs.

A world of production solely for use and free access for all is there for the making. All it requires is a majority of workers who understand and want it to join together for the purpose of bringing it about. For years a minority of workers have argued the case for such an exciting social alternative. For how much longer we will remain a minority is up to our fellow workers. Will they accept a world of misery and insecurity and poverty in the midst of potential plenty, or will they unite for the creation of a system where never again will the pained cry of a hungry child whose parents lack the money to feed it be heard on our planet?