Socialism – the Alternative to Barbarism 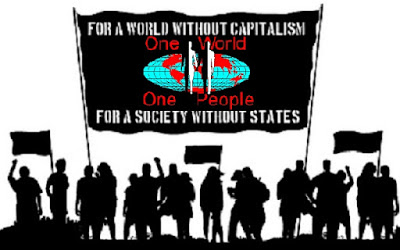 Around the world, all the hopes of a better future and the promises of prosperity being just around the corner have come crashing down, one after the other. Poverty, misery, famine, disease, and war have become the daily realities.

The  aim of socialism is the transformation of private ownership and control of the means of production  into their social ownership and control by the community at large. The prvalent misconception  of the term socialism has come to be applied to any activity of the state or municipality in an economic direction. Hence any industrial or commercial enterprise nationalised by a government is labelled socialism nowadays. State ownership or control does not mean socialism. The state of to-day is mainly an agent of the possessing classes undertaking and running of a nation by governmental bodies  in the interests of these classes. Their aim in all cases is to show a profit, in the same way as ordinary capitalistic enterprises. This profit accrues to the possessing classes in the form of tax relief, mainly paid by them, interest on loans, etc. In other words these industrial and commercial enterprises  are run for profit and not for use and their employees are little, if at all, better off than those of private employers.  The idea that socialism means  the concentration of the means of production, etc., in the hands of any corporate entity that may be called a State, irrespective of what that State may be, is ill-informed. This notion  of production, etc., in the hands of a ministerial department would not be socialism in any sense.

The aim of socialism is namely a revolution in human affairs involving the change in matters economic, of individualistic or private property holding, into communal property,  a change from the government of people to the administration of things. With regard to socialism and communism, we may say that the words socialism and communism are  interchangeable, and mean economically the communisation of the means necessary to production,and distribution, and nothing else. Socialism means cooperative associations. The socialist systemis the  cooperative commonwealth, with production and distribution,  administered on communal lines, for the benefit of the entire population.

The aim and tendency of a socialist society must be towards complete economic equality throughout the whole of that society with the greatest possible extension of liberty, individual and social, being a fundamental principle of socialism. As socialism implies, it is the most absolute toleration. No form of coercion, such as the impregnation of the  minds of  with dogma would be consistent with socialism.

The workers’ movement can survive only by class struggle against all the forces of the bosses and the boss politicians. The workers must build their own party. There are no “friends of labour” in the capitalist parties.

The Socialist Party challenges the capitalist system and proposes to remove it, (as if it were a malignant tumour on human society.) Socialism means a society of peace and plenty, instead of a society of war and hunger. Only the working class, which has nothing to gain and everything to lose under capitalism, can create world socialism.