The Earth for All 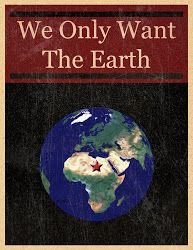 We live in times of revolutionary change. World organisations have been swept into limbo. Dictators have appeared as heaven-sent “leaders” of war-like nations. Politicians, statesmen of long-standing, have performed miracles of agile acrobatics, with their principles somersaulting and their positions flipping.  The Socialist Party that keeps to plain facts, is hotly denounced by both Right and Left. Amid the reams of paper and gallons of ink, used in publishing defences of capitalism, the short, plain, straight statements appearing in the Socialist Standard stand out like a spotlight, casting an illuminating beam through a cloud of murky confusion. While each and every political party has retracted their ideas, the Socialist Party statement does not require alteration.

Growing inequality and mounting misery are causing increasing protests around the world.

In the years following the 2007/08 crash, the world’s richest 1 per cent increased their wealth until they owned more than the bottom half of the world’s entire population. The world’s billionaires saw their wealth increase by nearly 70 per cent during the pandemic.

We can turn the millions of empty houses and offices which exist as purely speculative assets into homes. We can expand public transport to make mobility available to everyone. We can even set up cafeterias that offer food for everyone in every neighbourhood something that many countries, including Britain, have historically done in times of hardship.

We can make energy democratically run, and truly sustainable. A 2020 research paper on energy sufficiency found that it is possible to provide a decent life to the entire global population at 40 percent of current energy use, despite population growth until 2050.

And we can end the practice of planned obsolescence that makes everything – break or fall out of fashion. 57 million tonnes of electronics were thrown away in 2021. If we only designed smartphones, TVs and other appliances to last twice as long as they currently do, we could reduce this by half right away, without reducing wellbeing (but probably reducing profits).

It is a waste of energy to attempt to reform or appeal to governments. We must organise to overturn the capitalist system.