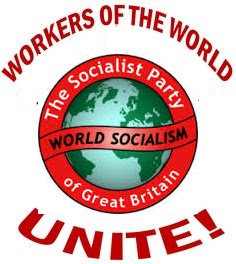 To try and achieve socialism is consciously to struggle for the overthrow of capitalism and its state institutions of state designed to maintain the economic and political dominance of the few who own capital over the many who have only possess their own labour power. A vote for socialism has a significance beyond  elections. It indicates your hostility to a system of society where production is carried on for the profit of the few instead of for the benefit of the many. Support for socialism means that you are  against a system which utilises its tremendous productive capacity only for war and environmental destruction. By agreeing with the Socialist Party you have the satisfaction of protesting against a system based on exploitation, greed and racial and national hatreds. Only a socialist will deal with these problems, having the interests of the people at heart. Some people will say that to vote for a candidate representing the ideas of socialism means to throw away one’s vote. In actuality he who votes for any of the capitalist candidates is throwing the vote away, because this means preferring one corrupt political machine as against another.  Until the capitalist system is completely overthrown wage slavery must still continue.

Socialist revolution is the most radical break with oppression and exploitation in history. Socialist society no longer proceeds in chaos, but according to the planned fulfillment of genuine human needs. Exploitation, oppression and degradation will not exist in socialist society. Commodity production, that is, production for sale or exchange on the market, will not exist. The system of wage labor will be abolished and the guiding principle of labor will be “from each according to ability, to each according to need.” The means of production will be held communally and private property will be eliminated.

Unite to end crises, depressions, mass unemployment and poverty in the world – A Socialist World.

Unite to end exploitation of man by man, to end the present system which compels the many to work to produce wealth for a few – A Socialist Society.

Unite to end all racial, national and religious discrimination and persecution – A Socialist One World

Unite to release for the  the productive forces of our world for the benefit of the overwhelming majority of our population, working people and their families - A Socialist Commonwealth

Unite to end the rule of the capitalist class and abolish the class struggle by abolishing capitalism, now able to survive only by mass deception, tyranny, terror and war – A Socialist Earth

Unite to liberate working people from the rule of capitalism; to guarantee the liberation of all mankind from the tyranny and repression – A Socialist Democracy

Unite to replace the system of  capitalism by which the millions of the majority are compelled to sell their only commodity, labour power, for the profit of a small minority – Free Access Socialism

With the abolition of classes and class distinctions, all social and political inequality arising from them will disappear. The conflicts of interest between workers and farmers, town and country, manual and intellectual labour will disappear. As classes will not exist, the state will not be necessary as an instrument of class rule and will gradually have withered away.