Capitalism Must Be Abolished 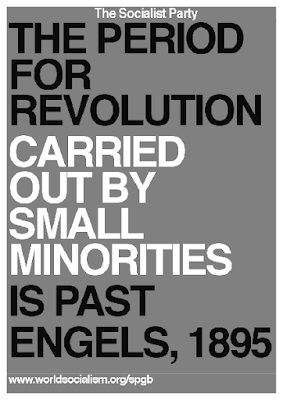 There are many points on which the Socialist Party takes a different stand from that taken by political groups on the left.

If the Socialist  Party’s analysis is correct, then it follows that the tactics reflected by this analysis are also correct. And by showing that the left-wing’s goal is wrong, that automatically disposes of the tactics these organisation advocates. The Socialist Party never compromises truth to make a friend, and never avoids exposing errors lest it makes an enemy. The integrity of purpose will inspire and win the confidence of those whom we aim to weld into class consciousness. We educate to organise the working class for the conquest of political power, for the complete overthrow of capitalism. Until that is accomplished, the Socialist Party will yield nothing.

Take a glance at the position of the left-wingers and what do we see? Neglect of the goal gives rise to the same spineless attitude that we showed existed in the industrial field. The Left wants a dictatorship of the proletariat and argues that the large mass of workers will never become socialist and will have to be led by an enlightened minority. So it is willing to unite with any movement of workers, no matter how wrong this may be, in order that they will have some masses to lead. The left is willing to barter away all its principles for the sake of recruits into its ranks, with party member numbers more important than principles

The Socialist Party is opposed to violence or the advocacy of violence in the labour movement because it knows that such tactics are playing right into the hands of the capitalist class. It is not cowardice that dictates our position but common sense and it is not heroism or bravery that dictates the advocacy of violence. It is not courage that makes the foolhardy rock a boat in rough seas, it is idiocy. Here in the UK, we have a right to come out openly and agitate for the overthrowing of capitalism and the establishment of a socialist society.

“We, the ‘revolutionists,’ the ‘upsetters,’ we thrive much better with legal than with illegal means in forcing an overthrow.”

If we did not have this opportunity then no alternative would be open for us but to advocate force overthrow of capitalism. Peacefully if possible, violently if necessary

The Socialist Party's attitude toward reforms, in general, is that the left, overly anxious to capture political office seizes upon every opportunity that captures the imagination of the people, regardless of whether it concerns the workers as a class or not.

The Socialist Party does not refuse ameliorations and reject palliatives offered by the capitalist class, but contends that the more revolutionary the workers become, the stronger they make their economic and political organisations, and the more readily willing will be the capitalist class be to offer reforms in order to keep them content and compliant.

The Socialist Party holds that the political party must be a party of no compromise. Its mission is to point the way to the goal and it refuses to leave the main road to follow the small bypaths that lead into the swamp of reformism. Capitalism cannot be reformed. It must be overthrown

The Socialist Party has always held that taxes are paid by the property-holding classes out of that portion of wealth, produced, true enough, by labour, but which labour never pocketed. In other words, taxes are paid out of those values, produced over and above the wage which the worker receives and which are generally known as surplus value.

The Socialist  Party holds that the working class the world over is indivisibly one; that as victims of the capitalist class their interests are common, regardless of nationality, colour or gender. Some on the left maintain that immigrants cause a keener struggle for jobs and lower wages for the workers. The fact remains that while immigration does add to the number of workers, and to that extent increases competition among the workers, it is a drop in the ocean compared to the real cause — the introduction of new technology, out-sourcing and off-shoring of production, plus the increased concentration and centralisation of capital. Even if every foreigner from now on were excluded, the misery of the workers would remain. The scapegoating and demonisation of immigrants foment racism and prevent the organising of the workers.