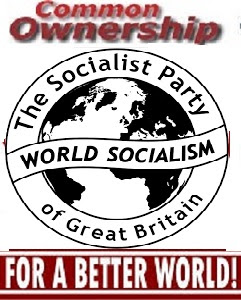 The productive powers of the world have permitted humankind to allow free distribution of the things needed to live and enjoy life. The Socialist Party is proposing a world community where wealth is produced by voluntary labour and is available to all free of charge.  No section of society should be able to monopolise access to the means for producing wealth. With socialism, these will belong to no-one and so will be the property of the whole of humanity to use as they think fit. Humankind will control the use of the means of production through democratic administrative bodies. Our case is that the technical capacity for world abundance exists. Free access means exactly what it says: that each person will be able to take all he needs without paying or asking permission. Socialism will unfetter production and enable it to meet these needs adequately. Any decisions and choices will be made by all the people involved, in contrast with what happens under capitalism. Why is it assumed that everyone will automatically want a mansion and a luxury limousine? That is projecting into socialism the way people think under capitalism.

Today’s society is organised on the basis of the minority ownership of the means of living (the factories, the land, the railways, etc.) while the majority of society’s members are deprived of such ownership and are therefore dependent on their livelihood upon the minority who own it. Because of their ownership of the means of living, the minority has an advantage over the majority and can generally use this advantage to promote their own interests even when they conflict with the interests of the majority. While it might be in the interests of the majority for more food to be produced, more homes to be constructed, more hospitals to be built, etc., it is not necessarily in the interests of the owning class—and if it isn't, the development of these things is restricted.  The main criterion for whether or not something is in the interests of the owning class is whether or not it will create the profits. Where the market conditions make the production of something unprofitable, that commodity will not be made. It is for this reason that the potential for the development of abundance is not fully realised, as progress is limited by the market in which the general rule is NO PROFITS, NO PRODUCTION.

If the means of living will be owned in common, so too the product of society will belong to everyone. Each person will have equal rights of access to the social produce, each will determine her/his own needs and take freely from the common stock of wealth produced. In socialism, the world’s wealth will not be bought or sold on a market. Nor will not be exchanged for money or bartered but rather it will be made freely available so that anyone who needs it can take it.

Because there will be no market, much of the work currently done by millions of people will become unnecessary. Socialism will not need the services performed by those who work in the vast finance corporations. Nor will it need the police, security guards, ticket collectors and check-out cashiers. Also, socialism will not require armed forces, legal and judicial systems, nor the vast propaganda organisations whose main tasks are the maintenance of the dominant position of the minority owning class in each national territory and the subjugation of the majority. Instead of doing these socially useless jobs, the people presently undertaking them would, in socialism, together with those who are now unemployed, be enabled to be creative. They would be so enabled because they would own the means and instruments for such creativity which the present social organisation denies them. Thus socialism will mean the liberation of humanity from such useless and uncreative work and the mobilisation of all human abilities for the extension of human abilities.

Just as there exists in Britain a national grid system for electricity, which assesses energy demand ], and maintains power supply in all areas, so too, in socialism, there will be a sort of worldwide grid system for all wealth, which will assess people’s needs, regulate production accordingly, and maintain the requisite supplies to all areas. Socialism will involve the rational and sustainable use of resources, using those to which they are best suited. There will probably be democratic assemblies and all administrators will have their functions delegated to them by society. However, the exact form which democracy in socialism will take, cannot be stated here, for that very form must itself be the result of a great and serious debate. The world already possesses intricate computer devices enabling the vast dissemination of information as well as facilitating decision-making.

Our future can be socialism, but it is not inevitable and requires human action for its achievement. What is needed, is for all those who have an interest in introducing the new society to unite and organise with like-minded people for the purpose of making socialism a reality.