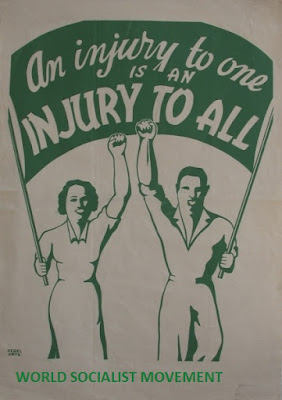 Workers are now confronted with the prospect of a global cost of living crisis. Capitalism is now embarking more definitely upon its long cherished aim of reducing the working class living standards. Despite the efforts of our masters, we have the inevitable outcome of the cyclic nature of capitalist production recession – “prosperity” - to recession again. That this crisis is more convulsive and more deep-going than preceding ones is caused mainly by the growing interdependence of world capitalist economy, making the crisis appear almost simultaneously in every capitalist country, and becoming more acute in all its manifestions.

Across  industry everywhere the pressure upon the workers is increasing. The capitalists are seeking to shift the burden of its economic difficulties further onto the backs of the workers.  That increasing working class struggles will grow out of the present recession is a foregone conclusion. More speed-up, more automation, more uncertainty of employment. Strikes are sweeping the world, constantly gaining in scope and intensity.  Working class forces are now being set into motion. The time of subservient submission is coming to a close and  the organised workers are now offering active resistance to the vicious attacks of capitalism. The unorganised, unskilled and skilled workers have begun to stir with a new fighting spirit. The unions will be compelled to seek new policies, new methods, which will go beyond the obsolete demarcation lines. The signs indicating discontent and unrest are everywhere. Ever more strikes  give evidence of working class exasperation of their deep seated grievances and expressing their rebellion against the employers. Without a question of a doubt serious economic struggles are once more looming.

With working people awakening, to unite their struggles is the task of our fellow workers. Persistent organisation work of building unions and preparation for future strikes is now particularly necessary, not merely sporadically in certain sections but as far as available forces and conditions permit on an international scale.  Lessons of the past should be taken advantage of to help guide the present and the future; and in time that the working class learns this lesson. The ebb and flow of the workers’ movement are part of the natural laws of social change. This process and its speed are not automatic. The future orientation of the workers’ movement still remains intimately bound up with the lessons of the past from which it has not yet drawn the necessary conclusions. At this moment the first necessity is the most elementary ground-work. Millions are still blissfully ignorant of their economic future and the employers have set to work actively to divide workers because of their fear of real working class action.

To the capitalist class the longer workday represents so much more absolute surplus value produced without any additional investments in the instruments of production owned by them. More surplus value spells more profits. This is the basic reason for their bitter opposition to any shortening of the workday. They have no intention of granting it without the most severe struggle. In fact they would rather, pressed to the wall, grant many other concessions which do not cut so directly into their profits. They know that the shorter workday is a real gain for the working class.

Cuts in real wages hit the workers in the most direct sense and become an important lever to help set them into motion against their class enemy. Regardless of all the servile efforts of the Labour Party to prevent their resistance, the workers will move nevertheless, compelled by these circumstances.

The working class now runs industry to its own misery for the profit of its oppressors, but the day is near when it should take those industries that have been built up with its blood and sweat and transform them from means of profit for a handful of parasites into the means of its deliverance from slavery and degradation.

The working class being the only class that works denies itself the satisfaction of its desires, with the result that wealth is accumulated in the hands of the capitalist class. The workers are in a huge majority over the capitalists. When they understand socialism, they can change the system. They can take over the means of wealth production, making them common property. They can arrange for the continued production of all necessary wealth and the manner of its individual appropriation and consumption.