No Money, No Wages, No Prices, No Private Property We are living in a class society in which there is no common social interest. The government’s job is to look after the interests of the propertied few who own Britain. This job involves all governments in conflict with the other class in society, those who have to work for a living. Capitalism is a class system that can only work for those who own the means of production. Until these means are commonly owned the problems facing wage workers can never be solved. Those who are going to vote Tory or Labour in the hope of getting a better life will be as disappointed.

In managing the affairs of the capitalists governments have to ensure that profit-making can go on as smoothly as possible and are, from time to time, forced to take measures aimed at restoring profit levels by reducing workers’ living standards. The Labour Party have done this as well as the Tories. The capitalist system just cannot be made to work in the interests of wage earners. his is why a change of government from Johnson to Corbyn would make no difference.


When the Socialist Party proposes that we can do without money, our critics from both Right and Left tell us it would mean we'd have to go hack to barter.

Who said that barter and money were the only two ways of getting wealth to people? Obviously if that were the choice, money would win hands down. It is a very convenient invention that saves much time and trouble whenever goods are bought and sold. It would not be very sensible to go back to barter anyway, since money developed out of the barter system when it was seen how convenient it was if all goods could be exchanged for one particular one.

It is not quite true that socialists want to "abolish money”. Socialism will not be like today except that there won’t be any money. What socialists want is a society in which, among other things, money will have become unnecessary. That brings us to the third choice: free distribution of wealth, or if you prefer free access to wealth, where people can take from the common store what they need as and when they need it.


Those who disagree with the Socialist Party say there would be utter chaos. People would just grab as much as they could.

People don’t grab those things which even now they can have as much as they like of. Take water. Once you have paid the rates, there is no restriction on the amount you can take. Do we find people leaving their taps running all day or filling buckets to hoard away? Of course not. People know what their daily needs of water are. and that there will always be enough to meet them, so they only take what they need when they need it. There is no charge to use some parks or libraries but people still behave normally: they use these free facilities as and when they want to. In some places they don’t charge for travelling on public transport. Yet still people behave sensibly: they use the trains or the phones only when they want to. This is normal behaviour. In a socialist society, where food, clothing, shelter, travel, entertainment and the other things people need to live and enjoy life will be freely available, why should people suddenly go mad and start grabbing more than they need? Is it not more likely that, as with water today, they will take only what they need?

Many in the environmentalist movement concerned with over-consumption warn the Socialist Party there wouldn’t be enough to go round anyway.

Oh yes there would. You needn’t worry about that. Scientists and engineers have long known that mankind has the means — the modern industries and farms, the technical know-how and the skilled manpower — to abolish forever famine, poverty and slums. There is no technical reason why modern industry should not turn out an abundance of the things people need. We can easily grow more and better food; manufacture more and better clothes: build more and better houses, schools, hospitals and other public buildings. It is a question of incentive. Today where production is geared to profit-making, this is not done because the rule is “no profit, no production”. In Socialism where production will be geared instead to meeting human needs, people can go on producing till all their needs are met.

People who doubt peoples capacity to work cooperatively ask who is going to work for nothing. Once again the underlying assumption, that people are basically lazy, is wrong. Most people don’t want to be idle all day long, doing nothing. It is normal to want to do something — in other words to want to work. For work is simply exercising your mental and physical faculties. Work may be pleasant (as in your leisure-time activities) or unpleasant (as, generally speaking, in your employer’s working time). Most people, quite reasonably, expect the work they do voluntarily to be pleasant. In socialism, with satisfying human needs (including the need for enjoyable work) as its aim and where all work will be voluntary, people will ensure that they work in safe and pleasant surroundings and that they enjoy what they are doing to help run the society of abundance which benefits them all.


Sceptics and cynics then want to know who do the dirty and unpleasant and dangerous work.

Well, that depends on what you mean by that. What work is dirty and what is not is a matter of opinion. The same work can be pleasant or unpleasant depending on why it is done and on how other people think of those who do it. People who wouldn't dream of being a navvy will gladly dig holes in their gardens. And some of the tasks performed by doctors and nurses are not much different from those done by lavatory cleaners.

Machinery could be designed to do nearly all the dull, repetitive jobs which human beings are now forced to do because it is cheaper to employ them than  to install machines. When society is geared to serving human needs, there will be every incentive to design and install machines to eliminate drudgery. If there prove to be some jobs that cannot easily be done by machines, then either they can be left undone or done (perhaps only for short periods) by people who recognise that someone has to do them. That such people will be found is a reasonable assumption since even today the dangerous, but obviously necessary, job of manning lifeboats is done mainly by volunteers. 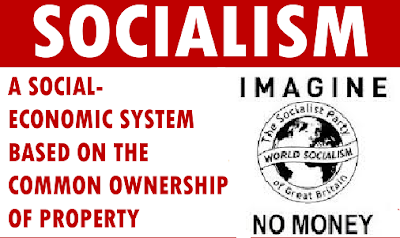