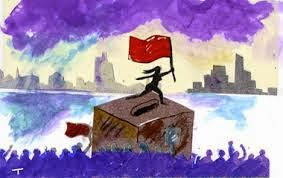 Why do socialists insist on the need to capture parliament? Parliament is the seat of political power through which control of the state apparatus is exercised. Although external influences are exerted upon parliament from big business, unions’ pressure groups and the like, in order to be effective such influence has to be channelled via parliament and realised in the form of legislation.
The basic function of the state, controlled by parliament, is to protect the interests of the capitalist class. The state arose out of the early divisions of society into classes and developed with the development of class conflicts. In this way, class rule through state power originated from class ownership. But private property is a social concept or relationship, the general acceptance of which cannot be separated from the general support given to those who exercise power in the interest of the owning class. The state, through which class rule is exercised will not ‘wither away’ as long as the class basis of society exists and conversely the class basis of society will not disappear as long as the state exists to prop it up.
Those who reject political action must explain how a revolutionary transformation can be brought about which would result in a class-free money-free system of common ownership and free access.
Two possible methods have been suggested:
1. The creation of a completely self-sufficient cooperative parallel society.
2. The anarcho-syndicalist proposal adopted by the founding conference of the Industrial Workers of the World in 1905 that workers should “take and hold that which they produce by their labour through an economic organization of the working class”.
“Workers co-operatives” are essentially no different from any other capitalist enterprise competing for the market and therefore subject to its laws; to compete effectively, workers in co-operatives may have to cut their own living standards or sack their fellow workers.
The second option of direct action is equally futile. To begin with the proposal that workers should “seize and hold” the factories and “lock out” the owners implies the fatuous belief that capitalists participate in production, or need to. It is the workers, including the “salaried” managers, who run the entire economy from top to bottom.
But supposing workers “successfully” took over a factory — what then? If they recommenced production, they would have to submit to the rules of the game, to seek to gain legal status to operate on a proper financial basis, to buy and sell. Workers in a nail factory cannot live on a diet of nails.
The parliamentary road does not imply that people hand over their power to others every few years. Parliament is the institution to which the working class shall send their delegates with the purpose of declaring capitalism abolished and to validate this revolutionary act. There has to be some means to effect the necessary transfer of power from the capitalist to the working class, a means which clearly and democratically indicates the will of the socialist majority. The parliamentary road is the answer. It will be within our party, not parliament that the “self-activity” and “self organisation” of the working class will be realised.
The Socialist Party. has always contended that the workers, before they can impose their will upon the capitalist class, must get control of the capitalist state-machine by the only means possible, securing a majority of the electorate.