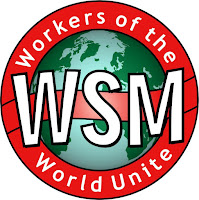 We stand for socialism: a new system in which the people own and control the  economy, through social institutions of the widest democracy. We stand for a socialist principles which are completely  opposed to the reactionary systems of exploitation of man by man which now divide the world. Capitalism is an outlived system whose lifeblood is private profit and oppression, whether or not represented as the “welfare state” and whether or not its government is administered by liberals or self-styled “socialists.” Our view of socialism is both democratic and revolutionary and it is the only movement for a new world of freedom, peace and security. We stand for socialism, the abolition of capitalism by the workers.  We believe that society has reached a stage where it is possible so to organise production to end poverty, unemployment, inequality and war.

Capitalism organises and exploits workers collectively. Our work is organised on the basis of social co-operation and the division of labour. Capitalism has, in fact, given workers tremendous collective power, power which runs factories, hospitals, schools, transport systems. This power creates all the things that we need as human beings – and often things which we do not need, such as weapons of mass destruction, for the capitalist class controls and uses this power for its own ends and its own profit.

But the collective power could be used to run society in the interests of the workers themselves.

Capital is wealth used for the purpose of obtaining a profit. The owner of this wealth —the capitalist—purchases buildings, plant, machinery, raw materials, etc. Then he purchases labour-power to use the plant and machinery on the raw materials for the purpose of producing commodities, or articles for sale. The value of the raw materials and of the portion of the plant and machinery, used up in a given time, form part of the value of the commodities, and pass over unchanged into the latter value.

The value of the labour-power can be represented at any given period by a particular number of hours’ work. If the labourer only worked this particular number of hours each day there would be no surplus produced as the value of the commodities would be equal to the sum of the values of (1) the raw materials used; (2) the portion of plant and machinery worn out; and (3) the labour-power expended.

But, by using the whip of hunger, the Capitalist compels the labourer to work for a longer number of hours than is necessary to replace the value of his labour-power. In these extra hours of work is produced the surplus-value which is afterwards split up into various parts. One part may be used to extend the business. Another part may be absorbed in advertising the goods for sale. Still another part may go to pay rates and taxes. The part remaining to the Capitalist after these distributions form his profit. Surplus-value is thus seen to consist of the products taken by the capitalist that the labourer has produced in the time during which he works, but for which he has not been paid. In other words, surplus value is based upon the robbery of the worker. Profit is a part of the results of this robbery.

This explanation makes it quite clear that an individual only obtains profit when he robs some worker, or workers. Whatever tools or plant a man employs in working for himself obviously cannot be capital, as he does not obtain a profit because he does not rob anyone. Only when he uses these tools and plant to rob some worker or workers of the values they have produced, do they become capital and he a capitalist. The fact that the appliances may be out of date or unscientific, does not prevent them from becoming capital in the above circumstances —though it certainly places the capitalist using them at a disadvantage in competition with other capitalists who are better equipped.

In the single tax theory the economic rent would go into the government coffers instead of into those of private or group Capitalists. This would leave the workers just as they are to-day, slaves to the master class, and robbed of the larger portion of the wealth they produce. Only socialism can end this slavery.

Nationalisation is merely the strengthening and concentration of capitalism. The interests of all workers, government employees or not, will be served by unqualified opposition to nationalisation as to other forms of capitalism. Socialism alone is the remedy for our class.