What Do You Want Out Of Life? 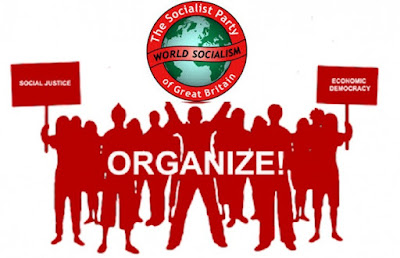 The Socialist Party is the political expression of the interests of the workers in this country and is part of the International working-class movement. The economic basis of present-day society is the private ownership and control of socially necessary means of production, and the exploitation of the workers, who operate these means of production for the profit of those who own them. The interests of these two classes are diametrically opposed. It is the interest of the capitalist class to maintain the present system and to obtain for themselves the largest possible share of the product of labour. It is the interest of the working class to improve their conditions of life and get the largest possible share of their own product so long as the present system prevails, and to end this system as quickly as they can. In so far as the members of the opposing classes become conscious of these facts, each strives to advance its own interests as against the other. It is this active conflict of interest which we describe as the class struggle. The capitalist state, by controlling the old political parties, control the powers of the state and uses them to secure and entrench its position. Without such control of the state its position of economic power would be untenable. The workers must wrest the control of the government from the hands of the masters and use its powers in the building of the new social order, the cooperative commonwealth.

The Socialist Party seeks to organise the working class for independent action in the political field. Such political action is absolutely necessary to the emancipation of the working class, and the establishment of genuine liberty for all. To accomplish this aim of the Socialist Party is to bring about the common ownership and democratic control of all the necessary means of production — to eliminate profit, rent, and interest, and make it impossible for any to share the product without sharing the burden of labour — to change our class society into a society of equals, in which the interest of one will be the interest of all.

The aim of the Socialist Party is the common ownership of the means of production and distribution, and the consequent economic equality of every human being on earth. The Socialist Party, as a party, is simply preparing the way for the peaceful and orderly reception of the socialist commonwealth, and if the transition from capitalism to socialism is in any degree violent, it will be in spite of the efforts and desires of the Socialist Party because, unlike them, others were blind to the trend of economic evolution. Wealth creation and health creation will go hand in hand. Then there will be ample leisure for every human being and in such an invigorating mental and moral atmosphere, the human race will unfold and expand in heart and brain and soul. The cooperation of all for the good of all will inspire the love of all, and for the first time since the planet rolled into space, the human race will be truly civilised.

The Socialist Party sets itself the aim of spreading socialist ideas.

The essence of its outlook can be expressed in the following few propositions:

I. The economic emancipation of the working class will be achieved only by the transfer to common ownership by the working people of all means and products of production and the organisation of all the functions of social and economic life in accordance with the requirements of society.

II. The modern development of technology in civilised societies not only provides the material possibility for such an organisation but makes it necessary for solving the contradictions which hinder the quiet and all-round development of those societies.

III. This radical economic revolution will entail the most fundamental changes in the entire constitution of social and international relationships.

Eliminating the class struggle by destroying the classes themselves; making the economic struggle of individuals impossible and unnecessary by abolishing commodity production and the competition connected with it; briefly, putting an end to the struggle for existence between individuals, classes and whole societies, it renders redundant all those social organs which have developed as the weapons of that struggle during the many centuries it has been proceeding.

Without falling into utopian fantasies about the social and international organisation of the future, we can already now foretell the abolition of the most important of the organs of chronic struggle inside society, namely, the state, as a political organisation opposed to society and safeguarding mainly the interests of its ruling section. In exactly the same way we can already now foresee the international character of the impending economic revolution. The contemporary development of the international exchange of products necessitates the participation of all civilised societies in this revolution.

That is why the socialist parties in all countries acknowledge the international character of the present-day working-class movement and proclaim the principle of international solidarity of producers.