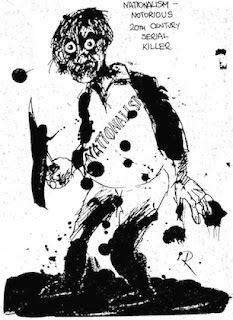 Nationalism is a political doctrine that preaches that people with a common history or language or religion form a separate “nation” from all other people and have the right to have their own political state to defend their common interest. The Socialist Party has always rejected this doctrine, not just because people who have a common history or speak the same language do not have a common interest; they are divided into classes, and a worker who speaks a particular language has a common interest with workers speaking other languages but not with a capitalist who speaks the same one but also because of its practical consequences.

Without the ideology of nationalism, capitalist states would be unstable since, being based on minority class rule, they need a minimum allegiance from those they rule over. Nationalism serves to achieve this by teaching the ruled to be loyal to “their” so-called “nation-state”.

The growth of global corporations, some with a turnover exceeding the GDP of most countries, has dramatically transformed the role of government as the focus of economic decision-making. Many of the most important decisions are now made, not by politicians, but by CEOs in the boardrooms of these multinationals. Indeed, this renders increasingly problematic the very notion of a “British” or “Scottish” capitalist class”. In practice, ownership of capital has become progressively dispersed across the world, a process facilitated by transnational mergers and buy-outs.

Likewise, the proliferation of trading links between different states has effectively blurred the lines of demarcation between nominally separate national economies. It would be more realistic now to speak of there being a single global economy. Even so, many locally-based businesses are indirectly tied into this economy as subcontractors to multinationals. Not only that, the ever-deepening international linkages means they cannot escape recessionary perturbations emanating from elsewhere when these impact the local economy. At the same time, the limited leeway of governments to ameliorate such localised effects has been correspondingly reduced.