What We Need to Do 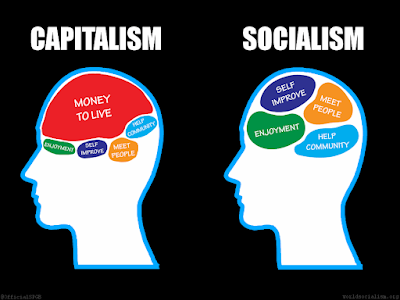 Workers owe it to themselves, their children and future generations to remove the profit motive, the property tag and all the rivalries and suspicions which are inherent in competitive societies. Capitalism distorts relationships. Putting a price on everything and subordinating all activities to the need to make a profit has made us all rivals.

The capitalist market that rules the world. Acting like a natural force beyond human control, it has much more power than any national government and forces governments to comply with its economic laws, whether they want to or not. The market creates an artificial scarcity and organised waste that is responsible for poverty and hunger in the world today. The law which governs production everywhere is “no profit, no production”. Global hunger and malnutrition are not natural but social problems. Its cause must be sought not in any lack of natural resources but in the way society is organised.

Capitalism, whether in its private or its state form, can never solve the problems that confront wage workers as these arise out of the very nature of capitalism as a system that exploits wage-labour for profit.  We are told that if we get a pay rise, the goods we make will not sell, because China will make them more cheaply, and we shall be worse off. So if we want to keep our standard of living up, we have got to keep it down. If we work for less than our Chinese counterparts, we shall be better off. Then they will want to work for even less, so that they can be better off than we are. Finally, we shall all work for nothing and live like Lords. So their logic inevitably goes.  We live in a society wherein a comparatively small section, by virtue of its ownership of the mines, mills, factories, railways, warehouses, etc., is able to acquire a mass of commodities by exploiting the larger non-possessing section of society—i.e., the working class. But unless each competing section of the capitalist class can ensure a large and ready sale of their commodities by keeping down, and even lowering, their commodity prices, they will find themselves ousted by other competitors. Capitalists, therefore, to keep up the sales that will ensure large profits, must undercut their rivals.

The acceptance of the socialist concept involves a critical examination of the whole of one’s ideas and beliefs. Now, most people we meet are not highly critical, not very imaginative, and not even interested. Their view of a better world is limited to the possibility of another few pounds a week in wages. Sport and showbiz gossip give them all the interest they want. And yet it is just these average working people who must be convinced that socialism is both practicable and necessary. It is not a lack of intelligence that is the stumbling block, it is something else. The case for socialism can be put and has been put in language easily comprehensible by a child.

It should be the task of our movement to provide socialist knowledge, not in the form of a small monthly journal and via low-traffic blogs and social media, but in every form, the genius of men and women can devise. Capitalists who sell wares have discovered that people are lazy, who move when prodded sufficiently, who are most responsive to repetition, and the continuous reiteration of the same story. They have found that the mere appearance of one word, like “Bovril,” on every railway station, every hoarding, and in every important media outlet, has a powerful psychological effect It becomes by sheer familiarity and persistence, part of the “acquired knowledge” encountered by the questing human mind. When we see ever every hoarding plastered with the word “Socialism"; when every bookshop is full of socialist books and pamphlets; when socialism is mentioned by every newspaper social media post every day, every week, every month, when the average person has socialism thrust upon him or her insistently and persistently, in season and out of season, things will begin to move and change. To take the socialist course lays a heavy burden upon the pioneers of a movement such as ours. That is the essential problem of the immediate present. How can the handful of enthusiasts who initiate the movement, get together sufficient funds to drench the working-class with its literature, to make its presence not only felt, but inescapable, to so familiarise them with its propaganda that misrepresentation becomes ludicrous? How can they, out of their poverty, engender this avalanche of publicity that is to overcome the workers' normal and natural inertia, and get them definitely on the move? Let every intelligent person, who has acquired knowledge by reading this blog, answer for him or herself. Every website visitor,  a member, and every member a party worker, that is our object. We shall move in proportion to our effort.