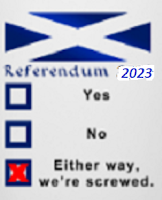 19th October 2023 is the target date for the second independence referendum.

We believe that to hold out hopes of amelioration of the condition of the workers through nationalism and independence is delusional and nonsensical. The Socialist Party has never been in the business to win popularity contests and jump on any old band-wagon such as Scottish sovereignty for the sake of recruitment. We are internationalists, opposing the idea that the rulers and ruled within a nation have any interests in common. We are against the divisions and false choices set up by nationalism.

The illusion of nationality is yet another tool of the ruling class, intended to trick workers into thinking that this really is some kind of collective society, and to misplace their passions that could otherwise be directed into the class struggle. Nationalism is the ideology which seeks to justify the capitalist division of the world into separate “nation-states”.We utterly reject this view of the way humanity should organise itself. We condemn nationalist ideas. When countries achieved independence little changed except the personnel of the state machinery.

It is of no concern to workers in Scotland whether they are governed from London or by a separate government in Edinburgh. This is because the cause of the problems they face is the capitalist economic system of production for profit, not the form of government. And the capitalist economic system would continue to exist in a politically independent Scotland. In the end, the point at issue - independence which leaves profit-making, exploitation and all the other social problems untouched - is so irrelevant that it is not worth taking sides. We don’t see any point in diverting our energies to changing the constitution but we certainly want things to change. We want people to change the economic and social basis of society and establish socialism in place of capitalism. We don’t want or care about Scottish separatism (any more than we care or support a “United Kingdom” or the ”European Union”.)

But we do want world socialism and do know that the way to further this cause is to advocate that and that alone. So-called self-determination encourages workers to waste their efforts in chasing something which cannot be achieved. Not simply because the native capitalist class preserves their power but any newly independent nation-state immediately find itself having to come to terms with a worldwide economic system dominated by powerful blocs and integrated on a global scale. The room for manoeuvre within this framework is extremely limited. Either the dominant power relinquished direct political control but continues to exert its domination at an economic level. Or the client state frees itself entirely from the domination of one imperialist bloc only by switching to the all-embracing hold of a rival bloc. Competition between nation-states puts pressure on each state to maximise its power to avoid subordination to others. States that have little power are under pressure to ally themselves with stronger states that have major economic forces at their disposal. In neither scenario is the result any real independence for the local capitalists or any weakening of imperialism as a whole. The formation of new nation-states can no more put an end to imperialism than the formation of new businesses can put an end to capitalism.

The interest of the working class in all countries is to reject all nationalism and to recognise that they have a common interest with people in other countries in the same economic situation of being obliged to sell their mental and physical energies in order to get a living.

Will “independence” make the Scottish workers better off and happier? Is it “London rule” that is responsible for the problems faced by workers in Scotland, or is it capitalism?

It can be seen in retrospect that independence for the vast majority of the people has simply meant the exchange of one set of exploiters for another. The realisation of "political independence" by a country leaves the workers' conditions untouched (or actually worsens them in some cases). As socialists, we don't take sides in this inter-capitalist argument. We don't support one section of the capitalist class or the other, and we don't have any illusions about the "sovereign power" of Parliaments to pass reformist legislation that can make capitalism work in the interest of the exploited class of wage and salary earners. Capitalism just cannot be reformed to work in this way; so transferring the powers of the House of Commons to a Scottish Parliament sitting in Edinburgh makes little difference.

Supporters of Scottish independence who talk about “democracy” always mean only political democracy since economic democracy - where people would democratically run the places where they work is out of the question under capitalism, because these workplaces are owned and controlled by and for the benefit of a privileged minority. You can have the most democratic constitution imaginable but this won’t make any difference to the fact that profits have to come before meeting needs under capitalism. The people’s will to have their needs met properly is frustrated all the time by the operation of the economic laws of the capitalist system which no political structure, no matter how democratic, can control.