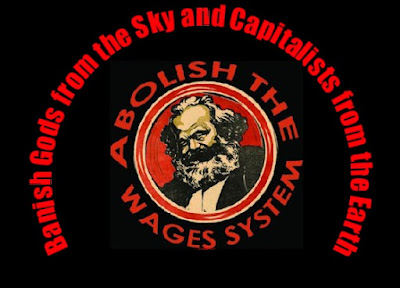 The capitalist nature of present-day society is a fact. No thinking person nowadays denies that we live in a capitalist era, where goods are produced for profit, where the worker is a mere instrument of production, a seller of labour-power, receiving in return for the expenditure of his energies a wage, just enough to keep the worker in that state of efficiency which will enable him or her to perform work satisfactorily. Practically the whole mechanism of production is carried through by large corporations, and these in turn are owned and controlled by often anonymous shareholders. The corporation is brought into being as a rule in order to eliminate competition.  They are examples of the evolutionary development inherent in capitalism to greater and still greater monopolies.

The ownership of corporations appears to be vested in thousands of private shareholders, but as anyone knows, who has inspected the share books of capitalist concerns, while large numbers of private investors hold five and ten shares each, the great bulk of the shares is often held by holding companies, institutions such as insurance companies and banks , so that the real owners and controllers, in the background can remain more or less anonymous. The Inland Revenue returns, however, disclose the real position. With the passing of each year the private incomes of the wealthy become greater, while the number of people of great wealth becomes smaller. One can almost visualise the eventual passing of the entire productive wealth of a country and its dependencies into the hands of one family or even one man.

The slave position of the worker can only be accentuated with the further development of capitalism. We will still be a slave to the class which exploits us and we will still suffer from the poverty and its consequences which goes with that condition. The worker must concentrate attention on the cause of poverty, the capitalist nature of the world in which we live. Cause and cure go hand in hand—capitalism the cause, socialism—-in the real meaning of the term—the remedy. There is one thing, however, the ruling class forget, and that is the increased knowledge that is being imbibed by those who live by selling their labour-power. The wage slaves are not all asleep.

The material conditions have reached the stage when the present system of production is a fetter on production. A sure harbinger of a new, and, let us hope, a better form of society, in which there will be neither wage-slave nor capitalist, nor private property in the means of life. The Socialist Party has so far lacked encouragement. The issue between the capitalist-class and the working-class has been kept clear, and moving circumstance has now brought into being those conditions which make socialism practical politics. It is the only policy that unquestionably offers peace and plenty to all mankind. It is the only policy that can be advocated honestly and without equivocation. It is most lamentable that the Socialist Party, in its long and arduous struggle to dispel working-class political ignorance, receive hindrance rather than help from those acclaimed by many as intellectual leaders.  Whatever its enemies attempt in another direction will be exposed as inadequate and harmful. The common ownership of the means of life and production solely for use is our goal. Those who ask for less condone exploitation and betray the class to which we belong.

Socialism is where the hope for humanity lies. We share an aversion for authoritarianism. Socialism cannot be till society consciously desires it. Violence will not achieve it, and consequently there will be no need of power to impose it. We strive for socialism—common ownership and democratic control of the means of life—not because it is moral, ethical, virtuous, or seemingly eligible for any other relative abstract description, but because it is a scientifically demonstrable social and economic necessity.

There can be no socialism without socialists. Socialism, which can only be democratic world, must be brought about democratically. This point should become obvious if you think about it. Democracy rules out leadership and self-appointed vanguards. Socialists who know what they want and how to get it do not need leaders to tell them what to do. The capture of power has to be done on a state-by-state basis because this is the way political power is structured in the world today. As the Communist Manifesto pointed out, it will first be necessary for the working class of a country to win the struggle for democracy over the capitalists in that country. But this does not mean that there can be socialism in one country. Nor does it mean that we can expect the workers of one country to be ready for socialism while the rest of the world lags behind. The idea of world socialism cannot be confined to one country.