Seriously, It's Time for Socialism

All government is based on the conception of the coercion of men and women unlike the socialist commonwealth which will be an administration of things.

It has been customary for citizens to be told that they must look to the State for protection yet it leaves them at the mercy of unsympathetic civil servants and irresponsible ministers. A socialist society must be one in which there is democratic control of all institutions, which effect on people's lives. It is now time to think beyond the welfare state. Democratic control over the means of production is the only solution to austerity cuts, never ending wars and the destruction of our environment. And it is the only road to the reversal of the current descent into barbarism. Democratic control over society is the goal of socialism and the only thing that will save the world. capitalism itself is the real enemy of the people.Socialism is not about fighting for palliatives or amelioration. Socialism cannot be reformed into being. We can’t make that distinction clear if we lend our support to capitalist politicians no matter if they call themselves liberal or progressive. Socialism is the Nordic or Scandinavian model of the welfare state.


Reformism's strategy is that working people should devote themselves primarily to winning elections so as to gain political office and pass legislation to improve their working conditions and living standards. Reformists also argue that too militant a resistance by workers to capitalist exploitations such as blocking the introduction of innovative technology or refusing new working conditions, will decreases productivity and this, in turn means a reduction in the pie to be shared by capital and labour, curtailing investment. It therefore follows for business to secure economic stability and growth workers must enter into partnership with employers and collaborate with them to increase their profitability and also acquiesce to the State’s  intervention to regulate capital-labour relations. The implication is that class struggle is not required nor really necessary for the long term interest the working class. Socialists reject the reformists' political method. So long as capitalist property relations continue to remain, the state cannot be neutral. Whoever controls the state is limited in what they can do by the needs of capitalist profitability and because, over any length of time, the needs of businesses cannot be reconcile with the interest of working people. In a capitalist society, you can't get economic expansion and growth unless you can get investment, and you can't get capitalists to invest unless they can make what they judge to be an adequate rate of return in share price or dividends. Even governments that would desire to further the interests of the exploited must make capitalist profitability in the interest of economic growth their first priority. If profits are threatened by the strength of the trade unions or if competition intensifies because of the cost of paying (via taxation) for social services which endanger the financial health of the companies governments will end up endeavouring to use its power to restore profitability by seeing to it that wages are constrained or and social spending cut, while the capitalist class receives tax breaks or subsidies.

Reformism gives false hope that electing a political party can achieve all the reforms the people and the planet need to survive. We know that the only solution to the plight of the working class and the planet is socialist revolution—the complete overthrow of the capitalist mode of production for profit and replacing it with a system of production for want and need, democratically controlled by the working class—to end hunger, homelessness, oppression and inequality. There are no short-cuts to socialism. If the Socialist Party doesn’t advocate the necessity of this then most probably, humanity faces the possibility of the end of civilisation. The immediate goal of the Socialist Party is the social revolution. We have been separated from reformists for quite some time, since our formation in 1904, in fact. Nothing binds us to them. We are above all socialists, i.e., we want to eliminate the cause of all iniquities, all exploitation, all poverty and crime: private property. We have, on the one hand, the toiling masses, more or less poor and enslaved, and on the other the privileged minority. The latter must disappear. The workers must go forward and take possession of the means of production. We must show that socialism isn’t an abstract concept, a scientific dream, or a distant vision, but a reality, destined to renew the world 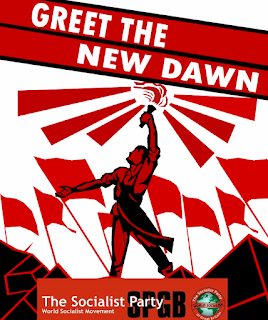