Vision of a socialist world 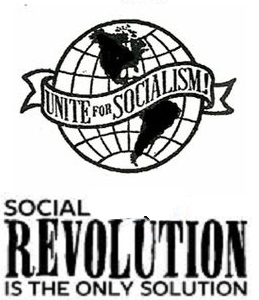 “Revolution”. The one word that expresses the  hopes and aspirations of the great majority of mankind. The one word our class enemies fear and hate the most because it means the end of their rule. It is a word we inscribe on our red banners because it points the way to the socialist future. The Socialist Party will excite the people with a vision of a world of plenty. New technology provides better products with less and less labour. Society now has the capacity to devote the energies and talents of its people to satisfying the intellectual, emotional and cultural needs of all. Radical changes in the way a society produces its wealth call for radical changes in how that society is organised. The capitalist class cannot convince working people to believe in their system while it is destroying their hopes and dreams. Capitalists disarm the victims of capitalism by turning people against one another. The Socialist Party will inspire people with a society organised for the benefit of all, a society built on cooperation which puts the well-being of its people above the profits and property of a handful of billionaires. When working people who  have no place in the capitalist system take control of all productive property and transforms it into common property, they can reorganise society so that the abundance is distributed according to need.

The Socialist Party  empowers people with the understanding of their role in striving for this new society and with the confidence that it’s possible to win. We take this message out to politicise and organise the revolution. We call on you to join us in this cause. We seek the political awakening of the people so that they can take their destiny into their own hands.

The whole world is in a crisis from which many fear it cannot recover. The clock is ticking. Everywhere society is in chaos and ferment. War and global warming threaten global starvation; and are shaking up the thinking of millions of workers, impelling them to take the road of struggle against the capitalist system which oppresses them. Socialism is our only hope and which supplies the key to the direction to travel if we are to survive. It is the theory and practice of working class revolution.


Profit is derived from unpaid labour time. Workers’ labour power is purchased on the market by the owners of capital. Put to work on average in half the working week, it produces values sufficient to cover wages to maintain a worker and family. The value produced in the remainder of the working week constitutes surplus value, the source of profit. The commodities produced by workers’ socialised labour are privately appropriated by capitalists. They will continue to be produced so long as they can be sold for profit on the market. It is inevitable that sooner or later these social conditions will impel people to organise to end the conflict between the socialised labour process and private ownership of the decisive means of production, the big factories, mines and corporate farms by the establishment of socialism. With socialism, production takes place for people’s use.

Ideas matter. A problem with socialism is the differences in the meaning of socialism where a majority of its people label themselves “socialist” in one sense or another; but the label is not very informative. Hypocrisy abounds. Much of the content of the various “socialisms” is a negative: anti-capitalism. Understanding the nature of capitalism is essential. We must name and define the system. Capitalist society remains a system for pursuing profits and limitless accumulation, amidst wage-labour. Capitalism is a system in which class exploitation is mediated by the market. Capitalists have an interest in promoting the highest rate of exploitation possible. It is through exploitation that they maximize their profits and maximization of profits is the basis of capitalist production. Thus, businessmen have an interest in paying the lowest wages consistent with capitalist reproduction (they cannot kill off their working class). They have an interest in a longer working day, poorer working conditions. In other words, they have an objective interest in promoting a situation that makes the life of the worker increasingly intolerable.

Workers, on the other hand, have the opposite point of view. They prefer higher wages to lower; safer working conditions to unsafe; a shorter working day to a longer one. Hence the two classes have conflicting interests and, as they are conflicting, they must be resolved through a fight, sometimes open, sometimes concealed, but a fight nonetheless. In this fight, the capitalists have the state to assist them.

Capitalists cannot exist without workers, but workers can exist without capitalists. As it is workers who actually do the producing, they are quite capable of undertaking this activity in their own interests. Hence, the logical conclusion to the struggle under capitalism is the elimination of capitalism and the transformation to socialism. This cannot be accomplished unless workers are aware of their objective interests and are organised to achieve this goal.