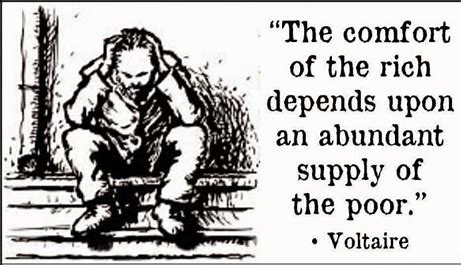 What he says is that capitalist exploitation requires that productive labourers be separated from the means of production and it is irrelevant whether the state owns the means of production or a person or a group of people. Many take disparity in income level as a way of defining a capitalist society and unequal political power can be also taken as a criterion to defining capitalism. Those who define capitalism as unequal income level seek redistribution of wealth via taxation reform. All these definitions of capitalism are alien to Marx.

What is socialism? Marx defined socialism as the abolition of wage slavery and the creation of a society based on common ownership.  Socialism is humankind's liberation from all forms of deprivation and bondage.

Marx’s theory of surplus-value is the cornerstone of his analysis of capital.  For him, class means the production of surplus-value by the worker and its appropriation by the industrial capitalist. When Marx talks about exploitation, this is what he has in mind. When Marx talks about class exploitation, he has in mind the extraction of surplus-labour from direct labourers by the capitalist enterprise. This surplus is the unpaid labour of the labourer that the capitalist lines up in his/her pocket. Marx's entry point to analyse capitalism was neither private ownership nor market but rather exploitation of labour-power and appropriation of surplus value by industrial capitalists.

The last bricks of the Welfare State are being dismantled and even the existing basic level of society's responsibility towards the individual, in terms of social welfare and economic security, is being challenged by employers and politicians. In many parts of the world nationalism and religion are on the ascendance. Yet in other regions of the globe workers are gradually emerging out of their previous political apathy. The world is entering a turbulent period of intensified worker protest movements. Today the destructive results of the recession and government austerity policies for the workers - unemployment, loss of social services, etc. - are felt more than ever. In the whole of Europe questions such as unemployment and lack of job security and so on are becoming a focus for a renewed surge of workers' movement, and the ruling class is losing its capacity for the political intimidation of the workers' movement through its once tried and tested populist mobilisation of the "middle-class" strata. The decline of trade unionism, while having immediate detrimental effects on the life of millions of workers, has created an environment for new thinking and alternative practices in worker organisation in Europe. The workers' movement has already moved towards more radical actions organised outside the traditional union structure, creating alternative organisations, as witnessed by the recent wildcat strikes. The worker is realising that it is the worker and worker alone who should take care of his economic interests and political rights, without hoping for anything to come from the politicians who fill parliamentary seats or the bureaucrats in their professional union posts. The era of workers' strength on the political stage is once again arriving.

Many political activists shrug their shoulders at socialism and socialist organization, preferring participation in the host of one-issue struggles and while socialists should actively be involved also in these fields, this doesn't preclude theoretical work for communism. Capitalist society will assimilate protests and re-formulate them after its own image, incorporating them into the establishment. To resist this requires the existence of independent socialist parties. The issue of the primacy of theory over movement, or vice versa, has little meaning. They are the different levels of a single social movement. Socialism is a movement for the working-class and communist revolution. We regard this revolution as possible and on the agenda right now. But as a class that is under pressure, we also fight for every improvement in the social situation which enhances workers'  political and economic power and promotes their human dignity. We also fight for every political opening which may facilitate the class struggle. We are activists of the worker's protest movement. We are fighting for the establishment of the worker's social and economic alternative as a class. The worker's position in production does not change. The economic foundation of society does not change. This class's alternative for the organisation of human society does not change. The worker still has to sell his or her labour-power daily in order to live, and thus views the world from the same standpoint and offers the same solution to it. Socialism is the worker's movement to destroy capitalism, abolish wage labour and do away with exploitation and classes.

There is a need to express the socialist vision in more concrete terms where more practical models of economic and political organisation in socialist society are elaborated. Many socialists say it is not for us to devise blueprints and utopias, that our task is to organise a revolution against the existing system, to make our goals clear but it is the process of workers' revolution itself that will provide the practical forms of their realisation. Nevertheless, to some degree, we must offer positive alternatives. Socialists should, firstly, communicate the precise meaning of socialist aims, and, secondly, show the feasibility of their realisation. It must explain that the abolition of bourgeois ownership does not mean the introduction of state ownership, and show how the organisation of people's collective control over means of production is practical. It must stress that socialism is an economic system without money and wage labour, and then show how organising production without labour-power as a commodity is possible.

Our job is not to make models and utopias and prepare a detailed blueprint of production and administration in a socialist society but to show in what ways a socialist society differs from the existing one. For example, we show the process of the withering away of the state following a socialist revolution by explaining the material basis of the state in class society and its superfluousness as a political institution in a classless society, and not by producing a step by step guide programme for the dismantling of state institutions and its departments.