This is class warfare 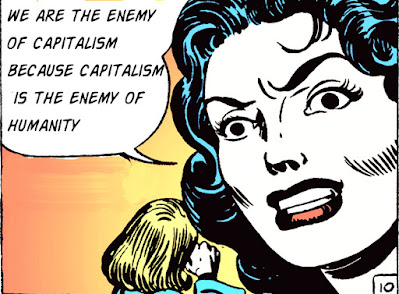 The workers’ only real bargaining power is their ability to stop production. Capital can create nothing without workers – labour creates all wealth. And to do this, workers must fight as a class. Class solidarity means that no scabs are allowed to cross picket lines, and it means blacking goods and products. When class solidarity was solid, it was difficult to defeat the workers. Class solidarity gained workers real social power in the workplace and in society. However, capitalism cannot function unless it subdues workers, so the employers close ranks and build their own class solidarity which is backed by the power of the State.  Employers can use parliament and the judiciary against workers because the capitalist State always has, and always will, serve the capitalist class, until the day that the working class capture the machinery of the State.

There can be no common interest between bosses and workers, only war. The power of workers lies in their ability to stop production. If they don’t use this power, they have nothing with which to bargain. Workers must unite as a class and disregard the boundaries of job type, workplace and industry. Workers must go beyond the boss’s rules. When workers challenge the employers’ right to dictate what happens in the workplace, they challenge capitalism itself. Workers must also challenge and work around the laws laid down by the State.

If the rank and file of the unions seek success, they must drop their apathy, take an interest in its actions and, above all, elect representatives from their own ranks instead of the bureaucratic officials with their dirty tricks and personal ambitions, who use the unions to crawl further into the graces –and the jobs – of the master class. Only by so selecting men from their own ranks, men who have no "official" interests to support, and over whom the members have complete control, can the organised workers ever get these problems of organisation settled in their own interests, and achieve the unity vital to the successful struggle on the industrial field. They must elect their officials to take orders, not to give them. Organised on that basis, refusing to be tricked and bluffed by promises, and recognising for themselves the hostility of interests between themselves and their masters.

While union members must understand the strength of unity they must also realise their weakness in the economic field against the power of the employers, then it will turn to the facts of its situation for a solution and find that the way to salvation lies through an organisation for control of the political power. Not until that is assured can the workers own the means of life and operate them for their own benefit. When that lesson is learnt the day of socialism will be dawning. The sentiment of solidarity must be embodied in the practical organisation based, not upon the mere transient necessity for wage claims, but upon the permanent need of the workers for the abolition of the wages system. To that end, the workers must organise as a class, not merely industrially, for the capture of supreme power as represented by the political machine.

Capitalism creates the conditions under which undemocratic business unions are reproduced and by which even the most well-intentioned leaders are co-opted. We must prepare to defy any bureaucracy that protects its assets more than its members. We must be willing to shed the union superstructure in order to rediscover and reclaim our power as a class. The siren song of “labour/management partnership” spells the death of genuine unionism where the only say workers get is finding more ways to deepen their exploitation.

What’s good for management is not always good for workers and helping the company compete and offering concessions means putting your head in a noose, for shared sacrifice is never shared and companies profit by gutting their workforce and pensions for our old age security is a vanishing mirage. The traditional union principle that capital can create nothing without workers – that labour creates all wealth – has been turned on its head, so that capital is now revered as the source of jobs and prosperity. Even more shocking is the extent to which union bureaucrats accept this lie and use it to pressure workers to accept concessions, in essence, to surrender to the market. Many union leaders believed that the interests of workers were linked with the interests of the corporations so allied themselves with capital and the State, even though this partnership put unions in direct conflict with the interests of workers. Union leaderships appear to equate patriotism with support for their nation's prevailing foreign policy. Class solidarity means nothing if workers back their State in destroying the lives of workers in other lands. Challenging this pro-management bias is key to reviving trade unionism

Over the past decades, the employers’ offensive has been fierce and unrelenting. Companies laid-off workers attacked unions and demanded concessions. Governments of both parties supported this assault by eroding labour standards, de-regulating industries, privatising social services and permitting job out-sourcing. The union bureaucracy was used to negotiate wages and benefits. It recoiled from the prospect of fighting an all-out class war to challenge the right of employers to profit at workers’ expense. So it accepted employers’ demands for concessions, no matter how deep, in the hope that once profitability was restored, the lost ground could be regained. Emboldened by the weakness of the unions, employers demanded more concessions, even as the economy boomed and profits soared. In essence, the union bureaucracy imposed the employers’ agenda on their own members. Workers who fought back were fired and black-listed. With few notable exceptions, strikes were defeated, union drives failed and workers became demoralised. The proportion of workers in unions sank. As a result, workers continue to lose ground.

Employers could not have defeated the working class without the support of the union bureaucracy. All traditional trade unionists, radical and conservative alike, understood that an effective strike had to stop production. However, many union officials had adopted “a management-inspired view” of striking, where workers abide by the law, rely primarily on moral pressure, and are easily defeated. Without the traditional tactics of solidarity and stopping production behind them, none of these strategies have proven powerful enough to make an employer suffer economically and resulted in a weak labour movement that functions within the existing system instead of trying to break free of that system. Over the decades, employers have relied on the compliance of union leaders to drive down the living standards of the entire working class. Seeking to protect their power base, and unwilling to fight the employers, union bureaucrats choose instead to sacrifice the class they profess to represent and to their everlasting discredit, union officials adopted the capitalist model of a turf war,  each set of union bureaucrats fighting to increase its membership and dues share, to grow its own union at the expense of other unions and the labour movement as a whole. Millions of dollars of union funds and countless union hours were squandered on lawyers, consultants and advertisers not to fight for workers’ rights but to battle other unions and to dominate the rank and file. Applying management union-busting tactics, bureaucrats attacked any local branch and any militant who fought for democratic control of their union. The many were sacrificed to benefit the combined power of the capitalist class and the union bureaucracy.

The union bureaucracy is a structure apart from the working class and with a separate interest – preserving itself. The union bureaucracy cannot lead the fight against the employers, not because of wrong ideas, but because (unlike its members) the bureaucracy has a stake in the capitalist system. Breaking laws would bring fines that would deplete union funds and threaten officials’ salaries and careers. Union bureaucrats cannot challenge the labour laws that hold workers down without risking the union assets that fund their careers. In other words, protecting their wealth and social status is more important than protecting their members. Bosses scheme to put union bureaucrats in their pockets and make them tools of management. Many union officials have become full partners in the exploitation of workers. You expect the boss to shaft you. You don’t expect your union leader to stab you in the back.

Fortunately, unions are more than buildings and bank accounts. All of these could be lost without losing the essential core of unionism – class solidarity. If fighting to win means sacrificing union “assets,” then that is what must happen. Unions cannot allow themselves to be held back by a bureaucratic structure that protects their wealth more than its members. However, unions cannot be democratised, or remain islands of democracy, in a class-divided society. All capitalist social institutions are constructed to prevent the working-class majority from exercising any real control over the matters that shape their lives. The demand for democratic unions can only be realised in the context of the fight for a truly democratic society – one that is collectively controlled by the majority working class