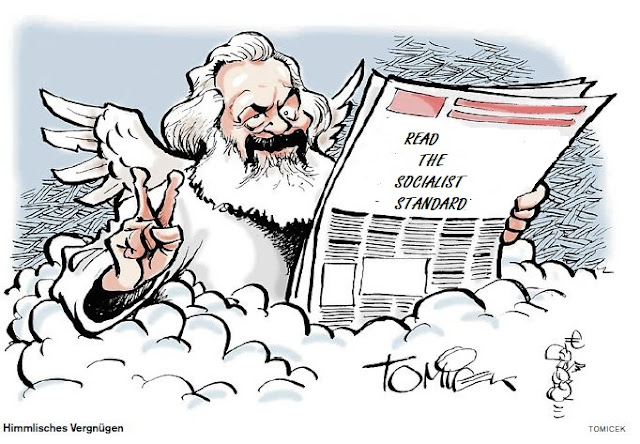 In an age where the internet provides us with unlimited access to direct sources, there appear to be no limits to the misunderstanding and distortion of Marx. In books and articles, there is continuous reference to Marx, attacking him from all sides for claims that he never made. How can it be that the ideas of Marx can be so completely misunderstood and distorted? One reason is that Lenin and the Bolsheviks appropriated Marx's theory and tried to convince the world that their practice and theory follow his ideas that instead of the role of a worker being abolished, it is extended to all men. Selectively quoted and out of context parts of Marx serve as the official ideology of the regime. Also, the reformist social democrats, believed they were the enemies of capitalism but for them, socialism is not a society fundamentally different from capitalism, but rather, just a form of capitalism in which the working class has achieved a higher status. iI is, as Engels described it, "the present-day society without its defects."  They genuinely do believe in a better world – but they believe it can be achieved by kinder, gentler capitalism and that profits can be used to promote environmental, anti-poverty, and certain other noble causes. But they don’t dare to ask – or to admit – where these very profits come from: the unpaid labour of the entire working class. The compassionate capitalists believe that applying market principles to philanthropy, charity, and the government will help lift the world out of poverty, cure-all famine and disease. However, they fail to recognise that the exploitation at the core of capitalism is what engenders the very poverty, famine, and disease that their philanthropic and charitable efforts are attempting to relieve. They think that those who are “privileged” to enjoy great wealth should take up the responsibility of sharing a tiny slice of it with poor people – and don’t recognise that the wealth/poverty divide was created by capitalism itself. Marx and Engels explain in the Communist Manifesto:

"The Socialistic bourgeois want all the advantages of modern social conditions without the struggles and dangers necessarily resulting therefrom. They desire the existing state of society, minus its revolutionary and disintegrating elements. They wish for a bourgeoisie without a proletariat. The bourgeoisie naturally conceives the world in which it is supreme to be the best… [It requires] in reality that the proletariat should remain within the bounds of existing society, but should cast away all its hateful ideas concerning the bourgeoisie… It is summed up in the phrase: the bourgeois is a bourgeois—for the benefit of the working class."

There is no greater misrepresentation of Marx than that which is to be found in the thought of the state-capitalists, the reformists, and the avowedly capitalist opponents of socialism alike, all of whom assume that Marx wanted only the economic improvement of the working class and that he wanted to abolish private property so that the worker would own what the capitalist now has. The truth is that for Marx the situation of a worker in a Russian "socialist" factory, a British state-owned factory, or an American factory such as General Motors, would appear essentially the same. Marx's concept of socialism is not a society of regimented, automatized individuals, regardless of whether there is equality of income or not, and regardless of whether they are well fed and well clad. It is not a society in which the individual is subordinated to the state, to the machine, to the bureaucracy. Even if the state as an "abstract capitalist" were the employer, even if "the entire social capital were united in the hands either of a single capitalist or a single capitalist corporation," this would not be socialism. Socialism, for Marx, is a society that serves the needs of man. Socialism for Marx meant neither the mere abolition of poverty nor the abstract idea of fairness which he rejected so scathingly in his Critique of the Gotha Programme. Least of all did Marx see socialism in which “representative” power and authority replaced individual power and authority over men.It should be clear the popular idea of the nature of historical materialism is erroneous. Marx's "materialistic" or "economic" interpretation of history has nothing whatsoever to do with an alleged "materialistic" or "economic" striving as the most fundamental drive in man. Marx has been criticised for presenting politics, culture, religion, etc. as simple effects of a one-way economic cause.  The popular view assumes that in Marx's opinion the strongest psychological motive in man is to gain money and to have more material comfort; if this is the main force within man, so continues this "interpretation" of historical materialism, the key to the understanding of history is the material desires of men; hence, the key to the explanation of history is man's belly and his greed for material satisfaction. It is the understanding of history based on the fact that men are "the authors and actors of their history." Marx saw that political force cannot produce anything for which there has been no preparation in the social and political process. Hence that force, if at all necessary, can give, so to speak, only the last push to a development that has virtually already taken place, but it can never produce anything truly new. "Force," he said, "is the midwife of every old society pregnant with a new one."Marx did not believe that there is no such thing as the nature of man; that man at birth is like a blank sheet of paper, on which the culture writes its text. Nor was Marx ever tempted to assume that "human nature" was identical with that particular expression of human nature prevalent in his own society. For Marx, the aim of socialism was the emancipation of man, and the emancipation of man was the same as his self-realisation and development of the individual personality.Capitalism has obviously changed in the hundred years since Marx and Engels wrote yet in the basic relations and structures that distinguish capitalism from feudalism and socialism, however, it has changed very little, and these are the main features of capitalism addressed in Marx's theories. The workers' relationship to their labour, products and capitalists are basically unchanged from Marx's day. Workers, for example, may earn more money now than they did in the last century, but so do the capitalists. Consequently, the wealth and income gaps between the two classes are as great or greater than ever.Marx wrote no “Utopia” of the kind that earlier writers had produced – writings based only on the general idea of a society from which the more obvious evils of the society in which they lived had been removed. But from the general laws of social development Marx was able to outline the features of the new society and the way in which it would develop.The capitalist class would love for class struggle to just be considered an old-fashioned notion from the past but the class struggle -- the conflict between the capitalists and the workers -- is at the very heart of the capitalist system. The majority of people would love to live in a world free of poverty, unemployment, racism and war. This kind of world is only possible under socialism. Most workers today would readily agree that this is the kind of world they would want for themselves and future generations. But they think it’s a pipedream yet it is the task of the working class to turn this vision into a reality. By learning the lessons of the class struggles that went before us and by applying our power workers develop revolutionary class consciousness. Our socialist perspective in no way means that we do not defend against the immediate attacks today. On the contrary, it is absolutely necessary, and socialists make good fighters for today’s struggle. But in order to fight most effectively, workers also have to understand that there can be no lasting concessions from the capitalist system. To achieve abundance for all, the working class will have to organise and build a genuine socialist revolution.
By ajohnstone at December 25, 2021