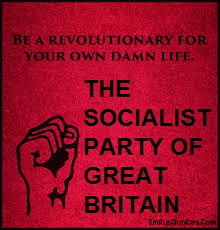 Social Creditors had the merit of recognising that the productive forces of capitalist society are being strangled in an economic straitjacket: that poverty in the midst of potential plenty is shameful and unnecessary. They sincerely desire to abolish war, poverty, and the miseries of exploitation, but without upsetting the existing social relations of production and without compelling anyone but a handful of bankers to yield up their power and privileges.

They find the scapegoat in “the money power”, the credit monopoly of finance capital. They insinuate that bankers deliberately create panics and crises by contracting credits or withholding them. They do not know that the calling in and curtailment of credit is simply evidence that the crisis is already underway, instead of being the fundamental cause of its occurrence, and they pass over the fact that bankers, like other capitalists, can only invest money where there is the prospect of profit.

The problem before society today is not a financial problem. It is a property problem. The banks belong to the superstructure of capitalism. Private property is the foundation. The financial crises, consumption crises, credit crises and the like are nothing more than the reflections of the fundamental economic crisis arising from the anarchy of production. No amount of credit supply to manufacturers, no amount of currency manipulation which leaves the question of property ownership untouched, can do other than aggravate the crisis of capitalism.

They are mistaken in the belief that money is not (or should not be) a commodity, but a system of worthless tokens, fiat money. They mistake the superficial forms of modern money (its paper dress as currency or its phantom bookkeeping existence as checks) for its inner nature. They completely fail to comprehend the function of money in a commodity-producing society, and particularly under capitalism, the most developed form of commodity-producing society. As the general equivalent of value, money is not only a commodity but the king among commodities, destined to reign so long as capitalism endures.

Nor do the Social Creditors understand that money is also subject to all the laws of capitalism. Chief among these laws is the necessity of transforming money into capital and using capital to appropriate surplus-value. The financier accomplishes this by loaning money to the industrialist or the merchant, who, in their turn, appropriate their share of surplus value directly from the working class. The self-same capital is used for exploiting purposes by both groups of capitalists, and yet the Social Creditors condemn the bankers alone. Their position amounts to this: the capitalist may exploit the working class, but the finance capitalist must not exploit his fellow capitalists.
Social Credit preys on the fear of the small businessman presenting the monster of finance capital which threatens to destroy them. Hence, the Social Creditor’s assault upon the credit monopoly,  which is merely a specialised extension of the monopoly of the means of production by the capitalist class. The credit monopoly is the means by which large aggregates of capital exploit the lesser capitalist groups, and through them, the working class. The credit monopoly at the apex of exploitation could be overthrown only by an overthrow of the general monopoly of the means of production in the hands of the capitalist class.

The Social Creditors, however, have no quarrel with any other form of the power of private property but “the money power”. They charge the banker with converting “the communal wealth into financial debt”, although that process is only a special case of the continuous transformation of social wealth into private property under capitalism. They speak of “the communal credit” as though such a thing existed in a social system based upon the institution of private property. Marx disposed of such nonsense once and for all with the remark that “the only thing which enters into the collective possession of the people under capitalism is the national debt”.

Douglas’ chief contribution to the science of economics is his discovery of a flaw in “the price system”. This flaw is formulated in an algebraic theorem, A over A plus B. According to Douglas, all purchasing power is distributed in the course of the productive process, as follows: Let A represent payments made to individuals..(whether workers or capitalists) in wages, salaries, and dividends. Let B represent payments made to other organizations for raw materials, bank charges, and other external costs. Then A, the rate of flow of purchasing power to individuals, must obviously be less than the rate of flow of prices, A plus B, by a proportion equivalent to B. This permanent deficiency in purchasing power is supposed to be bridged by the banker’s extension of credit against production. When the banks withdraw credits, the gap between prices and purchasing power grows wider and wider, until the crisis occurs.

This theory fails to explain why, if there exists a permanent deficiency in purchasing power, capitalist crises break out periodically. The Social Creditors attempt to get around this difficulty either by asserting that the present crisis is altogether unprecedented, a phenomenon peculiar to current times, or by accusing the bankers of anti-social conduct. Neither of these explanations will hold water. Fourier over a century ago described the first capitalist crisis in the same phrase used by the Social Creditors, “poverty in the midst of plenty”. The financial magnates are as helpless as any other capitalist group to start or stop a general capitalist crisis, although they have induced temporary credit stringencies for their private purposes.

But even as it stands, the fallacy in Douglas’ discovery is not difficult to detect. This lies in the fact that B payments (raw materials, bank charges, and other external costs) are A payments (wages, salaries, dividends) at a previous stage of production. So long as some other, more fundamental flaw does not interrupt the production and circulation of commodities, B payments will continue to be transformed indefinitely into A payments; banks will keep extending or renewing credits, and the industrialist will continue producing profitably. The fundamental cause of capitalist crises is to be found in the antagonisms of capitalist production, which generate all the relatively superficial flaws discovered by Douglas in “the price system”.

Except for scientific purposes, it does not much matter whether the reader grasps this part of the Douglas theory. His panacea does not necessarily follow from it, nor is it understood by most Social Creditors. They put their trust in the scientific attainments of this quack doctor of economics because his remedy is so cheap and palatable.

There are three proposals in the Social Credit program: the socialization of credit, the National Dividend, and the Adjusted Price. First, the power of creating credit is to be taken away from the private bankers and vested in the state. Then the state is to be incorporated and a National Credit Account set up. Out of the Social Credit, calculated from the excess of productive capacity over purchasing power, National Dividends will be periodically distributed to all eligible stockholders of the corporative state. The inflationary rise in prices which would follow the issuance of National Dividends (a fancy name for unsecured currency) will be prevented by the Adjusted Price. The Adjusted Price requires all retailers to sell their goods at a decreed discount and to be reimbursed at the average rate of profit by the government. Thus, Social Credit combines the best features of the dole, perpetual price-cutting, and a bull market.

The scheme is utterly Utopian. If credit was nationalised, as it is for all practical purposes in many capitalist countries today, it would simply put a more powerful weapon in the hands of the monopoly capitalists who control the state and be used, as it is in those countries, to protect the profits of national capitalists against foreign competition. The closest the workers will ever get to a National Dividend under capitalism is the national dole, a subsistence pittance to keep them alive until capitalist production or imperialist war needs them. To put the Adjusted Price into effect would entail the regulation of the .entire national economy, and, short of proletarian revolution, this could only be attempted by a dictatorship of monopoly capital. Credit could only be successfully socialised, however, after all the instruments of production had been socialized.

In the Draft Scheme for Scotland, Douglas proposed to reduce all wages in organized industries twenty-five percent, to deprive the membership of any trade union violating a wage agreement of the National Dividend, and to compel every worker to remain at his present trade for five years after the initiation of the scheme on penalty of losing his dividend. The National Dividend is supposed to compensate the worker for this loss of wages, freedom, and the right to strike.  Social Credit is radical in form and reactionary in substance. Its propaganda panders to all the confused pseudo-socialists covering for their outspoken hatred of finance capital. The Douglasites walk with their heads in the clouds, filled with rosy dreams of the future in which, by their financial feat, there is enough of everything for everybody, God’s in his heaven, and all’s right with their world. Social Credit propaganda has influenced certain sections of the labour movement, who substitute speeches about “holding the banker’s to account” and the nationalization of the banks of England for a revolution. The bankers won’t flinch from this “onslaught”, but people may be diverted from that which matters more than all else today, namely, the struggle to secure the social ownership of the means of production.

Social Credit has ruled two provinces in Canada for a number of years. In New Zealand, they had a number of MPs. In both countries they proved themselves to be loyal servants of the ruling class and ardent defenders of the capitalist system.