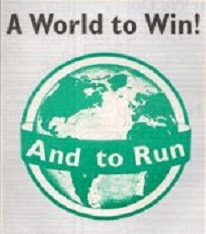 “The word Revolution, which we Socialists are so often forced to use, has a terrible sound in most people's ears, even when we have explained to them that it does not necessarily mean a change accompanied by riot and all kinds of violence, and cannot mean a change made mechanically and in the teeth of opinion by a group of men who have somehow managed to seize on the executive power for the moment. Even when we explain that we use the word revolution in its etymological sense, and mean by it a change in the basis of society, people are scared at the idea of such a vast change, and beg that you will speak of reform and not revolution. As, however, we Socialists do not at all mean by our word revolution what these worthy people mean by their word reform, I can't help thinking that it would be a mistake to use it, whatever projects we might conceal beneath its harmless envelope. So we will stick to our word, which means a change in the basis of society." —William Morris in How We Live and How We Might Live.

The world is crying out for change. Millions of children die each year of starvation while those with millions spare themselves no indulgence. People say that we in the Socialist Party are utopian because we hold to the view that a new society is the only lasting solution to the mess we're in and because we dare to suggest that we could run our lives in a much more rational and harmonious way. Some people on the "Left" decline to define socialism because they think that any account of a future society is a waste of time and that we should concern ourselves with present-day struggles. But unless you do talk about where you're going, how will you know when you've arrived?

More and more people today recognise that the present system of production for profit makes our lives needlessly painful and is ruining the planet.  Unless you do have a clear idea of socialism then anyone can claim it, defame it and say it doesn't work. And unless we keep the idea of working directly for a worldwide cooperative community on the agenda people will always be sidetracked. It is essential that the ideal of the new society should always be kept at the fore.

It cannot be stressed enough, that without a widespread and clear idea among workers of what a socialist society entails, it will be unattainable. The reason is simple. The very nature of socialism—a money-free, wageless world of unrestricted access to the goods and services provided by voluntary cooperative effort—necessitates understanding. There is absolutely no way in which such a sweeping fundamental transformation of social relationships could be thrust upon an unwilling, unknowing majority by some minority, however enlightened or well-meaning.

The Socialist Party is not prepared to associate with organisations that carry on propaganda for the reform of capitalism, recruit members on that basis and seek the votes of reformists. Our case is that work for socialism is the essential end and it cannot be combined with reformism. Socialism cannot be achieved without a social revolution, that is a change in the property basis of society, from private ownership to social ownership and democratic control.  Alone, we have stood for a social revolution to overturn capitalist society and replace it with socialism.

We envisage socialism as being established globally and almost simultaneously. As far back as 1847, Engels wrote:

“Will it be possible for this revolution to take place in one country alone?

No. By creating the world market, big industry has already brought all the peoples of the Earth, and especially the civilized peoples, into such close relation with one another that none is independent of what happens to the others.

Further, it has co-ordinated the social development of the civilized countries to such an extent that, in all of them, bourgeoisie and proletariat have become the decisive classes, and the struggle between them the great struggle of the day. It follows that the communist revolution will not merely be a national phenomenon but must take place simultaneously in all civilized countries – that is to say, at least in England, America, France, and Germany.

It will develop in each of these countries more or less rapidly, according as one country or the other has a more developed industry, greater wealth, a more significant mass of productive forces. Hence, it will go slowest and will meet most obstacles in Germany, most rapidly and with the fewest difficulties in England. It will have a powerful impact on the other countries of the world, and will radically alter the course of development which they have followed up to now, while greatly stepping up its pace.

Ideas are social and cross borders. How music genres arise and then travel the globe, or how fashions are adopted across cultures?

The importance of labour in creating all wealth was a fact recognised long before Marx and was acknowledged by Adam Smith. But why heed classical economists. Didn't Abraham Lincoln say "Labor is prior to and independent of capital. Capital is only the fruit of labor, and could never have existed if labor had not first existed."?

Why not study "the Enclosures" of England (a similar process took place worldwide and is still going on) Stealing common land from the poor and driving them to seek work in the cities as factory fodder. The 19thC industrialists were rightly called "Robber Barons"

"The law locks up the man or woman

Who steals the goose off the common

But leaves the greater villain loose

Who steals the common from the goose.

The law demands that we atone

When we take things we do not own

But leaves the lords and ladies fine

Who takes things that are yours and mine."

We are for the abolition of private property and the implementation of one of the oldest customs and traditions humanity has developed for its collective survival, the principle "from each according to ability, to each according to need.", an end of the exchange economy and the introduction of free access this means the abolition of wage and money and those working in occupations related to commerce/capitalism transferring to socially productive work. And the emphasis is on socially productive and not simply shifting money around to benefit a small minority of people, or speculating which is very basic...buying cheap and selling dear...yet ignoring the fact that the value of the object is in its manufacture, not its circulation. We stand for the free commonwealth...or as another put it

"Store-houses shall be built and appointed in all places, and be the common stock...And as every one works to advance the common stock, so every one shall have a free use of any commodity in the store-house, for his pleasure and comfortable livelihood without buying and selling or restraint from any." - Gerrard Winstanley in the 17th C

It may be easy to dismiss the term "wage-slave" so easily...countless numbers of people follow their hobbies without payment because they enjoy it. People have their gardens and their allotments and happily tire themselves out working...but place that person on a farm and demand he or she exhausts himself for a wage by denying any other way to support him or herself and their family and that the fruits of this work are taken from him and the rewards of placing it on the market to be sold and bought then ask if that person is not a slave. Someone who well knew what it meant to be a chattel slave and a wage slave explains it thus