Eco-socialism, another grand concept with an adjective. 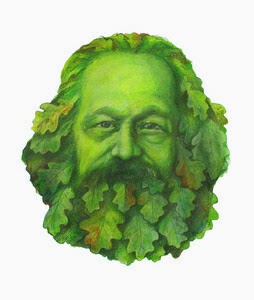 Marx summed up radical green politics when in Capital III he noted:
“From the standpoint of a higher socio-economic formation, the private property of individuals in the earth will appear just as absurd as the private property of one man in other men. Even an entire society, a nation, or all simultaneously existing societies taken together, are not owners of the earth, they are simply its possessors, its beneficiaries, and have to bequeath it in an improved state to succeeding generations, as boni patres familias” [good heads of the household]”

Marx took Feuerbach’s notion of fetishism to describe such radical humanism. Feuerbach famously argued that human beings invent gods and goddesses, forget they have invented them and bow down to worship their own creations. Marx reminds us that human beings, through social action, create the economic system; we then forget that the economy is a human construct and worship it as if it were a god. Ecological sanity can only come when we recognise that the present economic system of capitalism is a social construct that must be overthrown. In Chapter One of Capital is the idea of use value as opposed to exchange value. A capitalist economy is focused on exchange values - we could increase use value by making goods that last longer, by extending the library principle to all kinds of goods. Even in a market-based society, car pools exist. Real prosperity means that we have access to useful things; it is quite different from wasteful increases in Gross National Product (GNP). Under capitalism resources that are free - from land to ideas - are essentially stolen, fenced in and sold back to us. The enclosure and commodification of labour is the most important form of enclosure. This increases exchange value (GNP) but makes us poorer. Some of Marx’s earliest political writings examined the imposition of laws that prevented peasants from gathering fallen wood in German forests. The open source principle of free access and creativity is an example of how enclosure can and should be fought. A society controlled by the few must be replaced by one that works for all. We must overcome a society based on blind accumulation.

The Green Party and many of its supporters do not recognise that they require a struggle against the capitalist system. Signaling the challenge to the old politics the Green Party has been modestly successful contesting elections. It's true that the environment movement has brought a new vocabulary and "discourse" into political life. The Greens vote is the result of growing disillusion with Labour and a steady growth in concern about environmental issues. The Greens presented themselves as a party to the left of Labour (which is not too difficult). But ‘green socialism’ is all about taking a stand against ‘green capitalism.’ In the process, many of the traditional socialist themes – e.g., distribution, power and property, planning and democracy – are updated and linked up with the new issues. Those involved in the Green Party are clearly sincere in their opposition to various versions of capitalism and their desire for a better world, but they seem to have no real conception of what "socialism" might mean. The working class, exploitation, the labour movement, do not figure at all. Neither does collective ownership. Their "socialism" is more a catchphrase for good causes in general than a vision of the democratic transformation of society, by workers, from below. While the Green Party may hold some good socialist members, and present some reforms, it is not a party of socialism and in the end will degenerate into a party that offers bike-lanes and budget cuts. Socialists must challenge green politics showing how ecological issues are of top relevance to the quality of life of working people.

The “green economy” focuses on commodification and the market. Yet the market takes too long to resolve problems, and the big corporations behind fossil fuels want to get a foothold in “green energy” at the same time as keeping their fixed capital. Their idea of a “green economy” favours technological fixes based on private property, for example large-scale projects such as huge offshore wind parks, and transcontinental super-grids for long-distance energy exports from Sahara desert solar facilities. Yet it is impossible to meet the challenge of reducing greenhouse gas emissions and catapulting the entire economy from the 150-year old age of coal and oil into the future of solar and wind without provoking crises. It is necessary to transform the mode of production and living so it is predictable that when some of the old branches of industry and their capital come under attack, it will in turn trigger resistance. Conversion of polluting and resource-intensive capital stock to environmentally benign alternatives? Impose green taxes? Just how viable will they be to the likes of the Koch brothers? Dreams of a "steady state" capitalism beloved of an ecological economist like Herman Daly and environmentalists like Lester Brown and the authors of Sharing the World are simply that — dreams. They accept that the market system is untouchable and look for salvation in changing the behaviour of individual consumers and adoption of energy-saving technology. However, since capitalism is addicted to expansion, and devotes vast resources to this effort, there's no reason at all to expect that gains in resource efficiency will go into reduced usage of resources and not into increased throughput and growth rates. The principle that "the polluter pays" will be a principle more honoured in the breach than the observance. But modern corporations have corporate lawyers who find loopholes and who appeal the penalties.

The alternative to socialism is literally destruction. As socialists we are aware of how very far down the road to making the planet uninhabitable for humans capitalism is, and how many humans have already suffered and are already suffering from the damage the profit system has done to our planet. We possibly have one more generation before it is too late. There won’t be any socialists, there won’t be any socialism, when nobody can breathe. Climate change is real and it’s as urgent as it gets that we make radical changes if we want a future on this planet. The working class have to continue to see ourselves as revolutionary because we are the part of humanity most indispensable for our survival. The Socialist Party viewpoint simply means that, until the working majority sets the rules of the political and economic game, any gains in such battles are provisional and vulnerable to co-option and reversal.

The environmental crisis tends to manifest itself either in the form of local outrages (motorway proposals, polluted rivers) or vast global problems (hole in the ozone layer, global warming, fishery depletion, global deforestation), and it's not surprising that environmental activists overwhelmingly get tugged in one of two directions and away from any revolutionary perspective.

The first is towards case-by-case guerilla warfare against specific environmental outrages, which the crisis will supply to the movement as if on a conveyor belt running at ever greater speed. The second is toward the organisations "that have the power to do something" — government ministries, United Nations agencies or even and increasingly, the “greener” corporations, themselves. What is at stake in this discussion is not whether governments can't be induced to change their mind on this or that dam or their objection to the very idea of a carbon tax, but whether any capitalist government, representing the "common affairs of the bourgeoisie", can subordinate the overall interests of capital to those of the environment for any length of time. Once that impossibility is truly grasped then environmentalists have no choice but seriously to measure their present ideas against the basic concepts of socialist theory and politics. Membership of a Green party, sometimes involving serious commitment to campaigns, but almost always involving confusion about goals and vulnerable to drowning in parliamentary tomfoolery of reformism. The slogan "Think globally, act locally" has the direct implication that each and every local initiative in recycling, economising on water and energy use and cutting waste can, summed together, make a critical difference. Decades of thinking globally and acting locally, while yielding a host of small victories, has not been able to reverse any major trend in environmental degradation. That's because it offers no pathway from the local to the global, no feasible strategy for making local action begin to count globally. This is all the more true because the local is hardly ever purely local, but linked to national and international webs of production, trade and investment shaped by the national and international division of labour. The "local" is forged by an increasingly global capitalism, which protects its interests through national and international state and semi-state bodies.

The concerned environmentalist has a choice between an ecological version of socialism or capitalism. We can reform it or replace it with something more democratic. The central issue is that of working class political consciousness, of imparting the true picture of a capitalism whose insatiable hunger for profit is not only devouring the working and living conditions of hundreds of millions of working people but the underpinnings of life itself. The future of our planet depends on building a livable environment  and a socialist movement powerful enough to displace capitalism.

Many thanks for your contribution to the discussion Martin. I have taken the liberty to reply to your reply at your website.