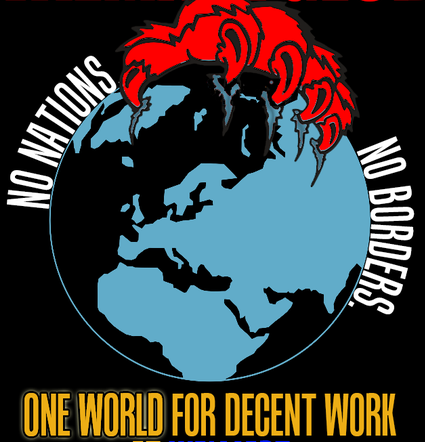 Socialists are internationalists. Whereas nationalists believe that the world is divided primarily into different nationalities, socialists consider social class to be the primary divide. For socialists, class struggle--not national identity--is the motor of history. And capitalism creates an international working class that must fight back against an international capitalist class. Capitalism is a world system and socialism can’t survive in one country, it has to be worldwide. For that reason the Socialist Party is implacably opposed to nationalism, which ties working people to our rulers and divides us from working people in other countries. The “national interest” propaganda binds workers hand and foot to their employers, blinding them to their true interest in working-class solidarity. Socialists argue that workers have no interest in the nationality of the factory owners or the land owners. We are working towards the working-class majority taking power and implementing common ownership. Once freed from market forces, the world’s resources will be used to meet human need.

Consistent international socialism as represented, for instance, by Rosa Luxemburg, opposed Bolshevik “national self-determination.” For her, the existence of independent national governments did not alter the fact of their control by the super-powers through the latter’s control of world economy. Capitalism could neither be fought nor weakened through the creation of new nations but only by opposing capitalist nationalism with proletarian internationalism. It is not the function of socialism to support nationalism. Contrary to earlier expectations, nationalism could not be utilized to further socialist aims, nor was it a successful strategy to hasten the demise of capitalism. On the contrary, nationalism emasculates socialism by using it for nationalist ends. It is not possible to support nationalism without also supporting national rivalries and war. No matter how utopian the quest for international solidarity may appear no other road seems open to escape fratricidal struggles and to attain a rational world society.

Although socialists’ sympathies are with the oppressed, they relate not to emerging nationalism but to the particular plight of twice-oppressed people who face both a native and foreign ruling class. Their national aspirations are in part “socialist” aspirations, as they include the illusory hope of impoverished populations that they can improve their conditions through national independence. Yet national self-determination has not emancipated the laboring classes.

Socialism will rise again as an international movement - or not at all. Those interested in the rebirth of socialism must stress its internationalism most of all. While it is impossible for a socialist to become a nationalist, the fight against colonialism does not imply adherence to the principle of national self-determination, but expresses the desire for a non-exploitative, world socialist society. While socialists cannot identify themselves with national struggles, they can as socialists oppose nationalism, colonialism and imperialism. It is not the function of socialists to fight for a nation’s independence but to strive for a socialist society. A struggle to this end would undoubtedly aid the liberation movements yet it would be a by-product of and not the reason for the socialist fight against neo-colonialism. The success of that struggle depends on achieving the greatest possible unity of the working class, it is utterly ridiculous to argue that the working class ought to divide itself into different countries in order to accomplish this unity. It is completely absurd to justify this with the false argument, disproven many times, that the battle for socialism would be easier if it were led by a more nationally “pure” and homogeneous working class.

Working class unity is a must right now if effective resistance is to be mounted to the crisis measures imposed by the capitalists. Unity is necessary to stand up against all the attacks on our democratic rights. Unity is the key in putting an end to the discrimination suffered by the oppressed. The working class faces a powerful and aggressive enemy which is solidly united despite the real contradictions within its ranks. The people are not going to win by dividing themselves. Those who dress up as socialists in order to push nationalism in the working class are the objective allies of the capitalists. The “left” nationalists would have us believe that the national demands of the people can only be met through independence. Thus, they claim, the task is to transform bourgeois independence into a socialist independence. In reality, they find themselves in the camp of those promoting division of the working class. The difference between nationalists and the other capitalist parties is not that they call for a different social system. What’s different is that they are looking for a new sharing of powers. The sharing will just be between groups of capitalists. Supporting nationalism in the name of the light for socialism is a monumental hoax. It flows from the same kind of logic that leads others to preach the nationalization as the cure for all our ills. It is up to the working class to show that it will not be duped by their political nonsense and deceitful rhetoric. Socialists have a responsibility to the working class to warn the workers as tactfully as possible of their mistaken course. At the present time, the capitalist class is launching a furious ideological counter-offensive against the ideas of socialism, it is our duty to stand firm in defence of the fundamental ideas and principles. We must reject the false road of shortcuts and panaceas, which leads to the quagmire of opportunism.

The Socialist Party cedes no concessions to the ideas nationalism and we continue to fight for the ideas of class unity and internationalism as the only way forward for the workers everywhere.

Email ThisBlogThis!Share to TwitterShare to FacebookShare to Pinterest
Labels: nationalism