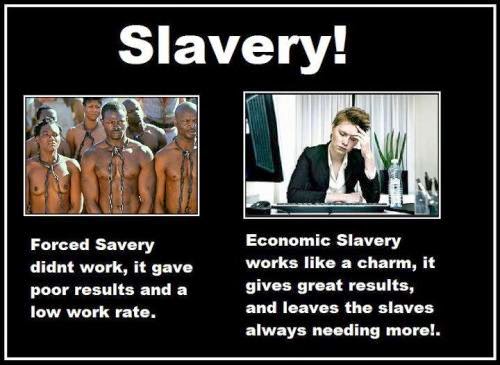 Nearly 36 million people worldwide, or 0.5% of the world's population, live as slaves, a survey by anti-slavery campaign group Walk Free says. Bondage and slavery are supposedly over but enslavement continues for the majority of people throughout the world. We are all enslaved economically yet blindly and unknowingly accept it. That form of servitude is called wage slavery.

Automation only happens when machines are cheaper to run than people. Automation should both require fewer people to work as well as  enable people to work less. Unfortunately this isn’t the case: the owners of automated industry use reduced production cost as an opportunity to take more profit which leaves us with increasing inequality alongside increased unemployment. And in a world where the capitalists own the physical means of production like factories, robots and patents this will also result in greater inequality as labour becomes less and less important as an economic factor. The owners of capital will be able to produce to satisfy market demand with little labour input.

There is an optimistic vision of the future. Physical work may become totally obsolete. If every house has a decentralised energy source like solar panels and reliable energy storage, as well as an advanced 3-D printer or molecular assembler that can produce almost physical object imaginable from a few basic recyclable chemicals then human poverty will essentially have been abolished. We can just spend the vast majority of our time doing things that we enjoy, while spending only a few minutes or at most hours a day programming our machines to fulfil our material desires.

However, there exists a more possible but less optimistic vision, that only a small minority of people will have access to such technologies as while the technology may exist, the costs of mass distribution remain too high. The masses, will be stuck in impoverished material conditions — dependent on welfare, and charity — without any real prospect being able to climb the ladder through selling their labour. Only a lucky few — who have a creative skill that cannot be replicated by a robot — will have a prospect of prosperity and security. Perhaps as the reformists hope the government will take a larger chunk of the capital-owning class’s income or wealth, and redistribute it to the poor to avoid social breakdown or even revolution.

The optimistic vision of a world of abundance without exploitation, hunger and war must galvanize the working class into a movement for socialism now that the global capitalist system has reached a stage where goods can be produced with little or no labour. The transition of industrial capitalism by new technology and computer is forcing an economic change and reorganization of society. A level of production has been achieved that makes communism possible. This is the turning point at which we stand today. Humanity today faces the choice: will we do away with private property and build a future for all to share in. Attempts to do no more than blunt the worst effects of capitalism may be well-meaning, but they divert energy from the real tasks ahead.

More and more are joining the ranks of those dispossessed by capitalism world-wide. A class that has nothing to gain from private ownership of the means of production has to take the reins of power and construct an economic system that can sustain a better world. The struggle today is not the struggle of the last century to expand industrial production. Nor is it the reformist’s struggle to increase the crumbs that fall from the table of the world’s billionaire plutocrats. Though people may have different ideas about and different ways of describing it, at this moment in history, the essence of every struggle for a better life is objectively the struggle for socialism which is no longer just an ideal, but the practical resolution to immediate problems.

If we remove scarcity from our vocabulary and replace it with abundance, we would also see dramatic changes in the way we live. We have been programmed to believe things are scarce when the opposite is true. We have an abundance of resources and should not be influenced to think different. The only reasoning for wanting the people to believe in scarcity is to increase profits for the rich. Let us plainly re-state this, we live in abundance and little is scarce. We should be here to enjoy life, not to overwork, to stress out, get sick and then die. We should spend the majority of our time, doing what we enjoy. Spending time with family, loved ones, vacationing, fishing, gardening, building new relationships, or whatever it is we enjoy. Let us start focusing on uplifting everyone, from the bottom upwards. The big picture is, we are all connected and we stand and fall together as humanity. The system of working everyday and barely making enough to pay for basic living expenses is not the way life should be yet it’s a system crafted by design to keep the masses earning meager wages.  The rich and powerful want the masses to remain enslaved and living on the skirts of poverty and completely beholden and indebted to them. We are too busy concerned about paying bills and having the basic necessities to live, then we don’t realise how the system we live under is corrupt and continues to enslave us all.  We are still enslaved regardless of your ethnicity or sex.  It’s not about color or gender, it’s about money.  Those in power want to keep us divided and believe that every man or woman should defend for him or herself when that certainly should not be the case. Think about capitalism and how many who actually benefits from it, go back and think of all the people you know in your life and be honest with yourself.  How many of your friends own several houses in multiple states and countries, yachts, cars, and get million dollar bonuses for running and even ruining a business? Capitalism has created an illusion to us all, leaving the majority thinking that they can one day become rich while knowing that the system of capitalism only allows those with money to keep on making it and those that don’t to keep dreaming and thinking that they can one day become rich and wealthy. The curse of capitalism is starting to be revealed and guess what?  The people don’t like what they are beginning to see.

We live in a world where there is an abundance of everything but scarcity allows the powerful to have control and make lots of money.  What if we abolished money and our political system that supports those privileged few?  What if we lived from a resourced-based society where everything was in abundance and there was no need for money?