Time to stop sitting on the fence 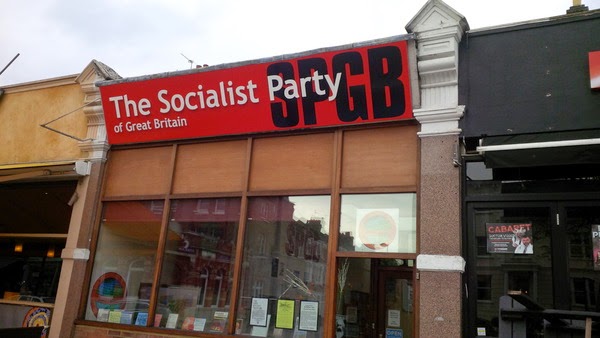 All around us we see a terrible spectacle of decay, desperation and social squalor. The SPGB is the only party that places the responsibility for this situation where it really belongs -- on the capitalist system. At the root of all the problems of modern society—inequality, poverty, war, disease—is a social and economic system, capitalism, in which everything is subordinated to the interests of a tiny elite. If this system cannot provide the basic needs of the great majority -- and it cannot -- then it has failed and must be replaced. The alternative to capitalism is socialism: the reorganisation of all economic life under the democratic control of the working class, to serve social needs, not profit. Every socialist has surely indulged in speculation about an ideal society from time to time. The realities of our own society certainly encourage such flights of fancy. But they should not be considered entirely fanciful: without imaginative thinking, it is quite impossible to see how the world might be changed for the better.

The idea of socialism is dead as the dodo we are told by our so-called betters. Anyone who imagines a different system of social organisation is an impractical dreamer.  Capitalism is the best economic system possible albeit with a few snags, we are told. But isn't the age of workers' revolutions over, is the chorus.  They tell us all this talk about the working class is old stuff, more appropriate to the nineteenth century than today.  Even many on the left of the political spectrum have come to believe so.  They argue that the hope for liberation from below is a charming but hopeless, even dangerous, dream; or that the working class is bought off and reactionary, if it has not disappeared altogether. Class politics has gone and now it is all about identity politics. As unrepentant socialists, we maintain that capitalism, is going the way of the dodo, not socialism. Our kind of socialism - stayed committed to the cause of the working class, refusing to rely upon leaders for answers or guidance. Some politicians imagine that imposing new taxes and instituting new financial regulations, establishing new welfare reforms will fix the social crisis.  But the cause is much deeper than bad policy or poor decisions, and will not be solved by tinkering around the edges. The paradox of reformism is it's not the way to win reforms, especially in periods of capitalist crisis, when the system's ability to absorb demands is minimal. Any possible social gains can only be won through the collective action of working people and without such pressure from below, the election of well-intentioned politicos is basically meaningless. We don't object to reformism because it advocates reforms, but because it has such a sorry record for obtaining them.  We have no callous desire to "bring the system down" by letting people starve, as is sometimes attributed to revolutionaries.  On the contrary, we aim to show people that by organizing and struggling, they can sometimes win, without relying upon undependable political leaders or union officials.

Many distortions of socialist theory arose from mistaken hopes that socialism could be created in societies of material scarcity, industrial underdevelopment and even in peasant societies where the working class barely existed. Equally futile has been the illusion that socialists could gradually alter the capitalist system through a process of government reforms. Many reservations that people have about socialism are the result of a perfectly healthy revulsion against the monstrosities and absurdities which have masqueraded as "socialism".  Around the world, states ruled by single parties and dictatorial autocrats draped themselves with the trappings of Marxism.  Minuscule left-wing groups announced themselves "the vanguard" of the working class, stifling democratic norms justified as "democratic centralism".  In the absence of revolutionary prospects, a tiny minority on the left have acted out infantile, self-indulgent nihilistic acts of rage while many more have habitually resorted to professional lobbying and other reformist political styles that don't challenge people to act on their own behalf.

The revolutionary potential of the working class has been demonstrated many times. United States history is full of examples of militant workers and radicals in struggle, from the Knights of Labor and the Industrial Workers of the World to the 1930s sit-down strikes of the CIO.  World history, too, reveals the revolutionary potential of workers and the oppressed: workers' councils in the aftermath of World War I up to  the May 1968 occupations in France. We could go on citing events.

We have an insane system of contradictions. Wealth is everywhere yet millions find no work and the hungry rummage through dumpsters outside well-stocked supermarkets. A system obsessed with acquisition denies basic sustenance to millions.  An economical system that worships growth rushes leaves the Earth an environmental wasteland. It is hard to believe, but there is a method to this madness: it lies in the basic dynamics of capitalist society, which is organised for profit above all else. At fault is not a calculating conspiracy of greedy bankers or rapacious corporate investors but the very driving force of capitalism: this relentless pursuit of private profit. Capitalism is a generalised regime of commodity production characterized by market exchange, including the purchase and sale of labour power.  Production under capitalism is organized for private profit, which is extracted from workers' labour and realised in the sale of goods at the highest allowable price.  This system of social and property relations works to benefit a ruling class made up of owners, financiers, merchants and executives who control key institutions of production and exchange: banks, insurance companies, stock exchanges, service concerns such as airlines and trucking, extractive industries such as coal and oil, and manufacturers and distributors of commodities like cars, computers and toothpaste.  This ruling class appropriates the surplus of the value created by the working class - the majority of us, whose living comes not from owning capital but from working for those who do. By virtue of its dominant social position the ruling class has a common and basic interest in defending private property and maximizing profit rates.  But it is not a giant conspiracy.  Sometimes real differences emerge in its ranks.  Sectors of capital clash over appropriate measures for the maintenance of profit rates, and they enter into political contest by underwriting different candidates in elections and lobbying for different public policy measures.  Precisely through the open expression of such differences, consensus is established within the dominant class.

Occasionally, capital has also been checked from below by a legacy of popular struggle carried out by working people.  Working class struggles have resulted in historic gains: the eight hour day, workplace safety regulation, legal recognition of unions, public education.  Such reforms are important, but they will always be temporary and precarious, vulnerable to being revoked so long as capital rules.

We seek to replace capitalism - which by its nature produces oppression and exploitation - with a new society, a socialist democracy confident in purpose and open to new ideas, vigorous and self-critical, free and cooperative, humane and ecological. Socialism means genuine social equality, on a world scale. Socialism means the extension of democracy to the foundation of all of society: the economic process. Socialists believe that equality, community and economic democracy can only be achieved by a system of common ownership of the means of production and distribution.

Socialism is not a gift to be given to the working class. It must be fought for and won by the working class itself. Socialists have always spoken of the working class as the key political force. The working class must urgently turn to the building of its own political party. Although to many people the prospect of a revived socialist movement seems but a pipe dream, capitalism is showing its impracticality and obsolescence in a host of ways at this very moment.  A rebirth of socialism is possible, just as periods of calm in the past have been interrupted by resurgences of radicalism.

The Socialist Party upholds fundamental socialist principles. No other political party represents the working class. The Socialist Party uncompromisingly defends the interests of the overwhelming majority of people: the working men and women, whose productive labour creates the wealth of society. Our party will fight for the socialist principle that production should be organised democratically to serve the needs of the working class, not to satisfy the rapacious hunger of the bankers, corporate CEOs and Stock Exchange speculators for profit. No one can pretend to have a sure formula for how to overturn the existing order and build a new one.  But we are confident that the struggle for a different society will have to begin with the rejection of elitist, condescending, top-down varieties of socialism.  It is time for socialism from below. Socialism from below is a vision of a new world, based on one central conviction: that human beings can construct a society without exploitation and oppression through, and only through, the maximum extension of democratic control. Socialism will be won by people on their own, together, in collective and democratic action.  We seek a revolution that is constantly self-renewing, even as a new society is constructed which facilitates and encourages radical democracy. Democratic planning and control of the productive process will be exercised through mass representative institutions, based on the shop-floor and workplace and extending to community organisations as well.

Modern technology have created the potential for sustainable abundance, but only if rationality is the basis for their use rather than private profit and class rule. Conserving and recycling resources, growing food without poisonous additives, clean and efficient mass transportation. The realm for culture and imagination, relaxation and leisure, self-expression and education. The emancipation of humanity from capitalism will only come about when workers act on their own behalf.  It cannot be achieved through any shortcut, though many have been tried. Socialism won't solve your personal problems or bring you eternal peace.  It won't even give you ready-made answers to every political and social question. The main reason to join a socialist organization is to work toward socialism.  The abolition of class rule and establishment of economic democracy will not come about unless there are socialists organised to push for it and to win others to the cause. Through debate and analysis, socialists help one another understand what's happening in the country and the world and how best to face the challenges that working people confront, sharing experiences and drawing inspiration and lessons from each other, generating and spreading ideas. Under capitalism, most of the key institutions, schools, churches, TV, radio, movies - exclude, ignore or caricature revolutionary views.  Only a visible socialist party with resources make the alternative to capitalism known. Membership in a socialist movement complements your practical and does compete with your activism, nor drag you into sectarian irrelevance, or hold you prisoner to rigid schemes inappropriate to the world around you. With all of the pressures put on radicals to conform and to remain focused on our goal, it's a lot easier to remain true to our principles when wehave comrades to turn to for mutual support in morale and introduce fresh thinking.