Only Socialists Can Save The World 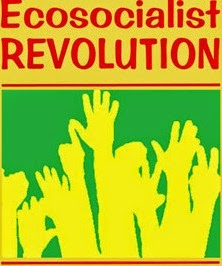 The Socialist Party agree with the many environmentalists who have concluded that “business as usual” is the path to global disaster. The economic system that dominates nearly all corners of the world is capitalism. Unconsciously, we learn that greed, exploitation of workers, and competition  are not only acceptable but are actually good for society because they help to make our economy function “efficiently.” No-growth capitalism is an oxymoron: when growth ceases, the system is in a state of crisis. Capitalism’s basic driving force and its whole reason for existence is the amassing of profits and wealth through the accumulation.  It recognizes no limits to its own self-expansion—not in the economy as a whole; not in the profits desired by the wealthy; and not in the increasing consumption that people are cajoled into desiring in order to generate greater profits for corporations. The environment exists, not as a place with inherent boundaries within which human beings must live together with earth’s other species, but as a realm to be exploited in a process of growing economic expansion. Indeed, businesses must either grow or die—as must the system itself.

The capitalist no-growth utopia violates the basic motive force of capitalism. What capital strives for and is the purpose of its existence is its own expansion. Why would capitalists, who in every fiber of their beings believe that they have a personal right to business profits, and who are driven to accumulate wealth, simply spend the economic surplus at their disposal on their own consumption or (less likely still) give it to workers to spend on theirs—rather than seek to expand wealth? If profits are not generated, how could economic crises be avoided under capitalism? To the contrary, it is clear that owners of capital will, as long as such ownership relations remain, do whatever they can within their power to maximize the amount of profits they accrue. A stationary state, or steady-state, economy as a stable solution is only conceivable if separated from the social relations of capital itself. Today multinational corporations scour the world for resources and opportunities wherever they can find them, exploiting cheap labor in poor countries and reinforcing, rather than reducing divisions. The result is a more rapacious global exploitation of nature and increased differentials of wealth and power. Such corporations have no loyalty to anything but their own financial bottom lines.

Business owners and managers generally consider the short term in their operations—most take into account the coming three to five years, or, in some rare instances, up to ten years. This is the way they must function because of unpredictable business conditions (phases of the business cycle, competition from other corporations, prices of needed inputs, etc.) and demands from speculators looking for short-term returns. They therefore act in ways that are largely oblivious of the natural limits to their activities—as if there is an unlimited supply of natural resources for exploitation. Even if the reality of limitation enters their consciousness, it merely speeds up the exploitation of a given resource, which is extracted as rapidly as possible, with capital then moving on to new areas of resource exploitation. When each individual capitalist pursues the goal of making a profit and accumulating capital, decisions are made that collectively harm society as a whole. The irreversible exhaustion of finite natural resources will leave future generations without the possibility of having use of these resources.

How can we save the Earth? Capitalism is unique among social systems in its active, extreme cultivation of individual self-interest. Our global culture is held together and connected by our economic system of money, laws and enforcement. This economic system is structured in such a way that it automatically and unintentionally motivates and perpetuates behaviors that are damaging to Earth. Yet the reality is that non-capitalist human societies have thrived over a long period—for more than 99 percent of the time since the emergence of anatomically modern humans—while encouraging other traits such as sharing and responsibility to the group. There is no reason to doubt that this can happen again.

The need for revolution is now increasingly being widely realised. The revolutionary socialist calls for power to the people. Socialism is rule by the people. They will decide how socialism is to work. This was how Marx and Engels defined socialism.  A sound definition of socialism must necessarily exclude all the institutions that make capitalism what it is:  a system of exploitation. The highly complex machinery of exchange veils this exploitation because it includes human energy, or labour-power, among the things bought and sold. It makes labour-power a commodity with a price, or wage-scale, adjustable to the practice of capitalism. Exchange, working in conjunction with private or class ownership of the means of life, is in fact, based on that ownership, and becomes the method by which the producers are exploited. Exchange is an act that implies ownership by individuals, groups or states. Common ownership rules out all such forms of ownership, and by producing and distributing according to the needs of all, eliminates the necessity for exchange. It is possible to conceive of exchange under a system of private, class or state ownership, but not under common ownership.  Exploitation will be eliminated and production will serve the needs of the people.

Socialism is about forming a society which is radically different from any that has gone before, a society based on the elimination of private property. The latter is condemned as being the cause of all the ills afflicting mankind, from minor disputes over boundaries to the great wars that have turned the whole world upside down. It is also about setting up a regime based on common ownership. There was no attempt by the Bolsheviks to abolish private property. Even their promise of equal wages, which has nothing to do with socialism anyway, was quickly dropped and large differentials in income were encouraged instead, while the Bolsheviks made sure that all property came under their direct control and, in effect, ownership. To use the word “socialism” for anything but people’s power is to misuse the term. State ownership is not socialism, nor does nationalisation constitute the ‘socialist’ sector of a mixed economy. Nor is the ‘Welfare State socialist.  Certainly it is an improvement on capitalism with no welfare, just as a 40-hour week is an improvement on a 60-hour week. But it is not socialism. But “welfare” in a capitalist state, to improve the efficiency of that state as a profit-maker, is not socialism but a form of state capitalism.

Many people today across the globe are involved in issues and struggles to improve their situation or stop injustices that they face. In practically every country and community, there are political struggles, and, of course, the never-ending efforts by workers to obtain a living wage. These various struggles are important but what the Socialist Party keeps in mind and build towards is the goal of revolution. By revolution, we mean the overthrow of the capitalist ruling class and the basic economic system of society. We believe a revolution is necessary because the social problems and ills of this society are all the product of the capitalist system itself. The basic nature of capitalism is that while the vast majority of people work and produce the wealth of society, a handful control all the wealth – the factories, mines, railroads and fields, and all the profits that are produced. These capitalists prosper at the expense of the vast majority of the people, and their constant drive for profit and more profit results in only more problems and suffering for the people.

While reforms are important, we believe that no amount of reform of the present system can offer any lasting improvements, security or stability or fundamentally alter their position in society.And too often the reformist is a hypocrite prepared to exercise power on behalf of the exploiter, and who claims to do a little good on the side. The ruling class always tries to limit or even take back those concessions that workers have won. The capitalists will always do this so long as it holds the power of society; it will try to milk everything it can from the working people to enrich or protect its own interests. In any sane system of running the economy, industry would exist to satisfy human need. But under capitalism humans exist to satisfy the needs of industry. If anything positive comes about as a result - such as the production of useful things and the payment of wages with which to buy them - this is a by-product of the process, rather than its main aim.