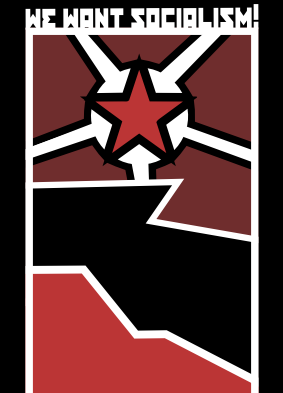 Humanity faces a global crisis caused by the capitalist system. There is catastrophic climate change which threatens to end life on our planet, then there is endemic war and conflict, mass poverty a ruthless assault on working people working and living conditions worldwide. Capitalism will destroy the human race. It is absolutely clear that the ruling class will continue to put the drive for corporate profit ahead of everything, even our own future as a species. It is incapable of changing. Even when it recognises the danger it cannot stop doing what it does. If capitalism is not overthrown, humanity is most likely doomed. The only way out is the abolition of capitalism and its replacement by socialism. The World Socialist Movement reject in advance any argument that the crisis of global warming and climate change is so critical that it stands above politics or that there is no time to build a mass socialist party or that we can’t wait for socialism to replace capitalism. We don't propose waiting for anything — we are campaigning all the time and are trying to drive the struggle forward right now. But the basic point still stands: the capitalist class is leading humanity to absolute disaster and its class position means it cannot and will not do anything else. What is necessary is to organise the forces capable of prising its mad grip from the steering wheel and carrying out a drastic change of course.

Under capitalism, the working class owns only its petty, personal property (clothes, a car, perhaps a house, etc.). It doesn’t own any part of the economy — the mines, factories, offices, supermarkets, banks etc. — these belong to the capitalists — so in order to live workers have to go and work for the bosses and pay tribute to them (the famous "surplus value" discovered by Marx). Their labour is "free" only compared to the past (i.e., to slavery and serfdom). Workers can choose their employer but they cannot avoid working for one or another member of the capitalist class. In the essence of the matter they are slaves of the capitalist class as a whole. This is why Marx termed capitalism a system of "wage slavery". The great mass of workers can never escape their proletarian, propertyless condition. Only by making a socialist revolution can the workers collectively become owners of the means of production which they operate. Under capitalism, the working class is a ground-down, deeply divided mass — it is simply fodder for exploitation by the bosses in the workplace. Workers are forced to compete against each other for jobs. They are divided by nationality, ethnic background or skin colour; by skill and type of work (blue collar, white collar, etc.); by their wage and general conditions of work; and by age and gender. These divisions are skilfully exploited by the capitalist class to keep the workers disunited and turned in on each other.

The all-pervasive mass media workers ensures the workers receive a fantasy view of what is actually desirable and possible for them. The socialist must challenge this by making clear that people cannot live without perspectives, without hope for the future. Those who hope to organise a great movement of the masses must never forget this, never fail to inspire fellow workers with confidence that the future will be better than the present if only we strive to make it so. The idea of socialism, of the good society of the free and equal, is not a utopian fantasy but the projection of future reality. When this idea takes hold of the people it will truly be the greatest power in the world.  The world will be changed by people who believe in the boundless power of the socialist idea.

The environmental movement is stuck on false panaceas like cap-and-trade, cutting individual consumption (“live others so that others may simply live”), and outright reactionary “solutions” that revolve around some form of population control (as if the number of people on the planet was the problem rather than the nature of the relationship between said people and the planet). A truly effective environmental movement needs to connect with the only social force within the capitalist system that can win real change – the working class.

Capitalism is organized around companies making as much money as quickly as possible; if they don’t, their competitors will drive them out of business. As a result, corporations have an incentive to pollute because investing in clean technologies for their business would be costly and cut into their precious profits. Furthermore, there are entire branches of industry that depend on pollution – gas, coal, and the auto industries, to name just a few. They have a vested interest in blocking any kind of meaningful development of green technology or any tinkering with the transportation infrastructure which is heavily car-centered.

If capitalism can’t be reformed to subordinate profit to human survival, what alternative is there but to move to a globally coordinated economy? Problems like climate change require the ‘visible hand’ of conscious planning. Capitalist leaders can’t help themselves, have no choice but to systematically make wrong, irrational and ultimately suicidal decisions about the economy and the environment. The fact that ecological problems don’t respect national or institutional borders is often used as an excuse for inaction, leading to the chronic breakdown of global climate negotiations. But that interdependence should be an impetus to reinvigorate the workers movements — a reminder that sustainability will come only through global solidarity. So then, what other choice do we have than to consider a true eco-socialist alternative? Is this Utopia?  But are not utopias, i.e. visions of an alternative future, wish-images of a different society, a necessary feature of any movement that wants to challenge the established order? The socialist ecological utopia is only an objective possibility, not the inevitable result of the contradictions of capitalism, or of the ‘iron laws of history’. One cannot predict the future, except in conditional terms: what is predictable is that in the absence of an eco-socialist transformation the logic of capitalism will lead to dramatic ecological disasters, threatening the health and the lives of millions of human beings, and perhaps even the survival of our species. What we need is socialism that points not to the primacy of ecology, but to the integration of natural and social, organic and industrial, ecological and technological; that recognizes human transformations of the natural world without simply asserting domination over it. We’re not talking about preserving an idealised picture of pristine, untouched nature — we’re talking about the world we choose to make, and the world we’ll have to live in. Workers don’t need to go green to save the planet - they need to go red.
By ajohnstone at November 25, 2014