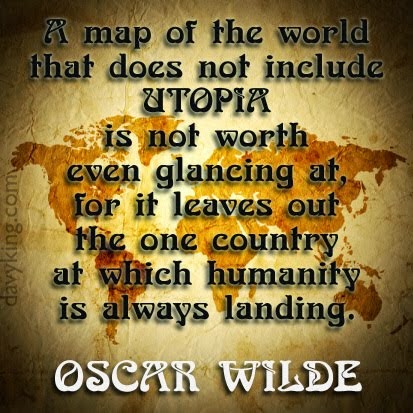 The highest reward for a man’s toil, is not what he gets for it but what he becomes by it.
- John Ruskin

“Utopian” has almost become a common put-down suggesting that one is being unrealistic, if not naïve, in seeking a socialist world. But the Socialist Party would argue that socialists must be utopian in the sense of holding in their very being the deep desire for the realisation of a world completely unlike our own. It is that for which generations have fought and it is that ideal that has kept many a class warriors going despite tremendous adversities. Nevertheless, many are unaware of what a socialist society could look like.

Marx, was scornful toward utopian “recipes” for the “cookshops of the future” arguing that a future society must emerge from the class struggle, not from the isolated imaginings of some writer or party, even though he himself proposed labour time vouchers, storehouses of goods, and an accounting system to determine how much workers would get paid. Genuine socialism is a socio-economic system in which all of the industries and services (stores, restaurants, hospitals, mines, farms, etc.) are socially owned, not privately owned, as in capitalism, or state owned, as in Leninism/Stalinism (i.e., often referred to as "state capitalism".) The industries would serve the needs and wants of everyone, not just the profit interests of the few. In fact, production is carried out exclusively for the needs of everyone, and not for private profit. People will work to improve society and to produce what we need. If there’s no buying and selling, there’s no trading, there’s no money. Yet people will have access to things that they need for survival and for pleasure — food, housing, medical care, computers. Every human being, just by virtue of being a human being, should have access to food, housing, healthcare and lifelong education. Every human being should have unconditional universal access to these necessities of life. So this will end poverty, which is actually the result of and a product of the existing monetary system. Monetary systems do not create wealth but exist solely to control it. The present is based on a self-fulfilling delusion that resources are scarce.

We may expect billions of current wage earners to quit drudgery jobs they hold just to make ends meet. With basic needs taken care of, they will be free to develop their natural talents and pursuits. Careers will be replaced by vocations. The evaporation of the financial and commercial sector will release vast numbers of constructive and creative workers. Emancipation from wage slavery will liberate humans to pursue lifelong learning, develop aptitudes and become more engaged in decision making and community building. Making a quick buck will be a thing of the past. Shoddy goods and inferior service will disappear. Business competition will vanish and s so there will be fewer brands, so less duplication and less waste as all goods produced will be of the highest quality based upon recyclability. The removal of the economic roots of armed conflict will no longer require standing armies or defense systems. Weapons manufactures will adapt and turn their advanced technology to peaceful purposes.

With no money or currency, there will be no interest, profits, markups, investments, loans, mortgages, derivatives, insurance or prices. This removes market manipulation, insider trading, hoarding and speculation. Banking will be obsolete, there being nothing to bank. The entire financial sector that has been built on the symbolic tokens of wealth will disappear. Without a medium of exchange, ransom, fraud, corruption, bribery, extortion and all money-based crimes will disappear. Crime based on money, such as armed robbery, extortion, blackmail, kidnapping will no longer have a convenient, easily convertible store of value to target.

There will be little need for charity as everyone will be provided for. In the event of natural disasters, relief agencies such as the Red Cross will have immediate and unlimited access to available resources without the necessity and constraints of fund-raising.

In agriculture building soil, maximising production and nutritional content with minimal environmental disruption will replace commoditization, restriction and pursuit of profit. Feeding people will be of the highest service. Food will be local, fresh, wholesome and healthy with minimal processing. There will be no reason or incentive to be otherwise. Freed from wage slavery, families will have more time to prepare meals from whole foods with care, balance and variety. The effect on public health will be markedly improved.

Imagine a world in which all conflicts of conscience, ethics, and personal interest were non-existent; a society in which the barriers to a decent and joyous life for all human beings had been removed; a society in which the resourcefulness of modern technology and industry was put to the task of decreasing labour and increasing leisure; a perfect picture of the world in which peace, equality, and harmony are universal. Socialists think it is achievable, that such a society is feasible and viable.
By ajohnstone at November 22, 2014

Who would not want such a world? My only regret would be that so much time was wasted, lives ruined and happiness lost.