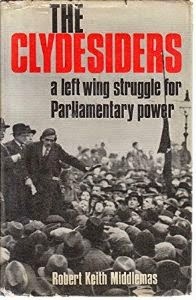 Book Review from the January 1967 issue of the Socialist Standard

The Clydesiders by R. K. Middlemas

In the general election of 1922 twenty Independent Labour Party members were elected from Glasgow and the West of Scotland alone. As a vast, hymn-singing crowd saw the new MPs onto the London train one of them, Emmanuel Shinwell, was aware that "they had a frightening faith is us . . . we had been elected because it was believed we could perform miracles and miracles were needed to relieve the tragedy of Clydeside in 1922." (Conflict Without Malice by E. Shinwell) The miracles, of course, failed to come. Capitalism proved more than a match for the reforms of the Independent Labour Party. Mr. Middlemas traces the gradual decline of that organisation.

The cover announces his book as "an important contribution to contemporary political history." This claim would not be so wide of the mark if he had got a few more of his facts right. Take, for example, his confusion of the founding of the Socialist Party of Gt. Britain with that the British Socialist Party on page 32:
The impossibilists', the hard core of followers of the American Daniel De Leon broke off in Scotland in 1903 to form the extremist Socialist Labour Party (SLP), and two years later in London to form the British Socialist Party.

Let us make it clear that our founder members were opposed to the confused industrial-unionism if De Leon and that the date of formation was 1904, not 1905 as he suggests. He is plainly mixing up the SPGB with the so-called 'British Socialist Party' (BSP), the inaugural meeting of which was held on 30th September, 1911—with Hyndman in the chair. (See H. M. Hyndman and British Socialism by C. Tsuzuki and the Socialist Standard, November 1912). The BSP held negotiations with sections of the SLP and of the ILP, and others, in 1920-21 and it was this reformist cocktail which eventually became the 'Communist' Party.

Despite the unfortunate mistakes, there are some interesting passages in this book. One of these, on page 276, gives a classic example of policy reversal by the Communists. In October 1932 the CP and ILP were co-operating and they organised the first Hunger March. Yet, only a year before, a Communist Party manifesto had referred to "the struggle against the ILP which is an inseparable part of British social fascism." Elsewhere we find that Shinwell gained his 'socialist' education by reading "the German Socialist Bernstein" and that Maxton, with unconscious schizophrenia, claimed to recognise the class struggle and the labour theory of value—but not the materialist conception of history!

Mr. Middlemas has little to say about the present little group, all that remains of the once powerful ILP. He merely reflects that "like the old-time SDF and the contemporary 'Impossibilists', the ILP was on the inverted road of splinter groups for whom it is more important to decide the details of the socialist millenium than the present methods of achieving it." But it is quite wrong to imply that the ILP sacrificed numbers for the sake of socialist understanding. They have been strongly influenced by anarchist ideas and, now that the great days of Maxton, Brockway and Wheatley have gone, feel that "parliamentary action . . . has many limitations, and its members cannot adequately represent the interests of the working class." Their demands include the extension of the "comprehensive system of education and abolition of the Grammar School system: and the introduction of "differential rent schemes", although "only a socialist society will be able to bring down the rents"! Finally, they have pledged themselves "to fight within the capitalist system" so that "commodity production (can) be organised for the benefit of the community." Could confusion go any further.

From the start the ILP followed an opportunist line and sneered at the 'impossibilists' in the Socialist Party of Gt. Britain. Never having Socialist principles, it could at least boast of a fair body of working class support. Now that that is gone, there is nothing left. It should be a lesson to all those who preach reformism.