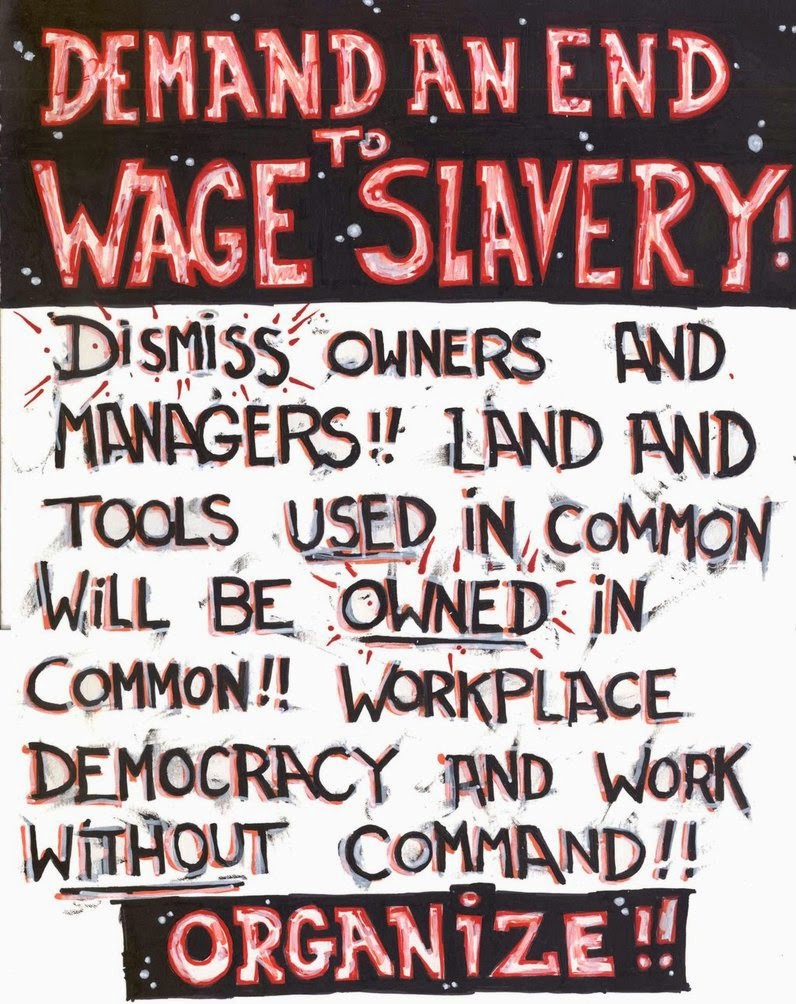 Upholding the common well-being, via socialism, is the only way to create a sustainable future that ends deprivation and insecurity. Capitalism has failed to provide the basic needs of society; even the “social welfare” state only manages to mitigate capitalist greed and corruption.

The most cited objection to socialism is incentive. Capitalism argues that without money to motivate, there is no reason to go to work. Under capitalism, it is insecurity that motivates people to go to work. Eliminate insecurity and the result is that incentive for worth-while work increases. The benefits of work itself – human interaction and social recognition for one’s contribution provide incentive to go to work. the incentive for turning up to work is to receive social advantages, such as meeting potential partners for dating/marriage, friends with whom to go out for meals/drinks and the gratification of social admiration for having performed to a high standard and being recognised formally as having done so. Would most people decide not to go to work and sit idly in front of a television if all their basic needs were provided for?

Socialists argue that the human urge for activity motivates one to contribute to society in one’s best capacity if only one is provided dignity and the means to pursue one’s full potential. Some might counter that people lose their “free time” when going to work, and should therefore not have the full burden of supporting those who choose not work, but the human compulsion to fill the hours with more than idle tasks – the boredom that comes of doing nothing – motivates one to do work if only there is more to it than a means to mere survival. The compensation comes in the knowledge that one’s contribution is valued for the work itself and all the social benefits that come from the recognition of one’s contribution. There is bound to be a small population of people who seem comfortable with doing nothing, but these people should be treated as having a psychological problem and referred to a doctor or psychologist, not threatened with a withholding of free access to the common larder. In socialism everyone has the opportunity to perform to their highest potential and formal acknowledgment of one’s work contribution – as opposed to cash in the bank for status – satisfies the craving for professional accomplishment. The Marxist phrase “from each according to his abilities, to each according to his needs” is not merely an ideological argument, as if truly exercised, life satisfaction is a standard, as opposed to merely an ideal.

What does the slogan “Right to Work” really mean ? To the average trade unionist it is probably the "right" to have a job and the pay packet that goes with it. In other words, it should be more accurately called "The Right to Employment" or "The Right to Work for Wages"

The Right to Work is a completely unrealistic demand and  amounts to demanding that employers abandon the profit motive and operate their system on some other principle. But they could not do this even if they wanted to, since what they can do is limited by the working of capitalism's market forces. Nor could they be forced to do it even by the most militant trade union or political action. If pressed too far, they would merely shut up shop. The stark fact is that capitalism creates, and needs to create, rising unemployment from time to time.

The Right to Work for Wages, in our view, is demanding the Right To Be Exploited. It involves accepting capitalism and its wages system. The employer/employee relationship is based on exploitation since, if the employer is to make a profit, the wages he pays his employees must be less than the value of what they produce. The system of employment for wages shows that human brain and muscle power has become a mere commodity, to be bought and sold like some object. It signifies that those who actually produce the wealth of society are excluded from ownership and control of the means of production and so have no choice but to operate them for the employers on the employers' terms — and at the employers' convenience. The wage packet is in fact a badge of slavery.

No, socialists don't want the Right to Work. It would be more accurate to say that we want its opposite, the Right To Be Lazy. This isn't as way-out as might seem. Just think of developments in technology over the past hundred or so years, developments which  are still going on, and you will see that the bulk of the hard grind of production is now done, and could be done even more, by machines. Automation and new technology could now relieve human beings of the burden of boring toil. Nobody need do a job he or she doesn't like doing. The set working day could be reduced to two or three hours, freeing people to engage in the activities of their choice, including even producing useful things. This will never happen as long as the means of production are the property of a minority. It could only happen in a society where the factories, farms and other places where wealth is produced are commonly owned by all the people. There would then be no employers, nor wage-earners. Instead everybody would be an equal member of a free community organised to produce an abundance of good-quality consumer goods for people to take freely according to their needs.

As already been pointed so long as it is enjoyable, work is a natural human activity, not to say need and so  talk of the Right To Be Lazy can be misleading. But although men will always work, there is no reason for it take the form of boring toil. It could and should be interesting and so become like some of today's leisure-time activities — done for the fun of it. To convert work from boring toil to creative activity is now possible. The ethic of hard work — necessary perhaps in the past to build up the means of production to the point where they can now turn out abundance — is outdated, and worse: it helps to keep capitalism going.

Other critics of socialism ask "Who is going to do the dirty work?" The lowliness or nastiness of a job are subjective estimates . A doctor or nurse, for example, or a public health inspector, have to do some things which would disgust the most unskilled casual labourer who did not see these actions in their social context. Yet the status and prestige of such people is generally high. Above all, it is the prestige of the working group and his or her position in it which will influence the worker's attitude to such jobs. If the prestige of the group is high and he  or she is satisfied in his membership of it, the type of work that has to be done  becomes a minor consideration.

Again as stated, ordinarily men and women like their work, and at most periods of history always have done so. When they do not like it, the fault lies in the psychological and social conditions of the job rather than in the worker. Furthermore, work is a social activity . . . Even when their security and that of their children is assured, they continue to labour. Obviously this is so because the rewards they get from their work are social, such as respect and admiration from their fellow-men.

We can estimate that at least half of all the workers running the capitalist system would be redundant in a sane society where work would be organised economically solely for the needs of the community. This means that, including the present millions who are unemployed, socialism would more than double the numbers of people available to do useful work. Also, these vastly increased numbers would be free to use and further develop the most advanced techniques of production. All this would add up to a huge increase in our powers of production. The priority would be to ensure that every person is comfortably housed and supplied with good quality food of their choice. The construction of a safe world energy system would be another urgent project. The present great differences in the world distribution of machinery, plant and up-to-date production methods would need to be evened out. But with an adequate structure of production in place we can anticipate that in socialism, we would soon be in a position to relax in the necessary work of providing for needs. The idea of producing enough for the community and then relaxing to enjoy many other kinds of activity which may interest people is impossible under a capitalist system.
By ajohnstone at November 16, 2014

As usual, I thoroughly enjoyed your post. As someone who is still learning all the intricacies involved with life under a socialist system, I have many questions. To start with, I often hear the idea of the people in a socialist society freely sharing of the fruit of their labor with everyone and everyone taking 'according to their need'. My question is - who decides how much a person truly 'needs'? If left to the individual, this would quickly degenerate into the greedy taking more than they obviously 'need'. So, in a socialist society, how is such a thing regulated or determined?

Needs are self determined.You have to evisage the type of society where artificial restrictions on production are removed.
Production is not switched off to satisfy the vagaries of a market, as in production for profit, so we can have production for use, with the accumulation of significant surplusses.

There is therfore no gain ,in taking more water or air than we need and similarly with goods.You can't eat more than you can eat, or wear more than you can wear.This sort of acquisitive behaviour,rewarded in capitalism would be seen as insane in a socialist society.

Bear in mind also, the people who make this revolulion are in turn made 'by' ,the revolution.

Hmm...I'm not sure I agree with that. It certainly sounds good, but what happens when there is a real scarcity of a certain item? I have friends in Venezuela who reported people hoarding (and in some cases stealing) goods that became scarce when Hugo Chavez cut off certain ties with capitalist countries. Of course I realize that Venezuela isn't a fully socialist country, but the example is still sound. Opportunists exist in literally every society on the planet. How would socialism deal with them?

There is no advantage to be gained in a free access society. If goods can't be sold or traded i.e. no market exists for them.

Socialism as we envisage it would not be in one country, even partially,as your example makes.There will be no blocks by capitalists in this way.

If an item is scarce and needs to be economised on, or rationed as such, there would be no advantage in a free access society from not engaging in the co-operative shared allocation of it, as everything else would be freely available.It couldn't be sat on and traded on for example.

It would just be seen as silly behaviour.