A world fit for live in 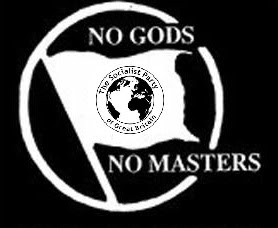 All rulers in this barbaric capitalist world are prepared to see people die if it is necessary to achieve their goals of accumulating wealth. They’ll happily blast apart cities and contently preside over a system that sees hundreds of thousands die each day from poverty.

For many months now, debates have been going on within a number the left-wing upon how to win over workers to ‘socialism’. Various organisations have been born such as TUSC and Left Unity and in Scotland RISE. Now, many are returning to the Labour Party fold since the election of Jeremy Corbyn. Despite the economic crisis and the devastating effects on workers it has been mostly the right-wing and the nationalist forces are on the rise. The Left has failed to provide a channel for discontent to express itself through; still less has it sought to mobilise discontent to resist the government. As yet the “socialist” alternative remains very much a fringe phenomenon within the workers. But the discontent is there and it is growing. The debate is about the road the working people must follow to free themselves of capitalist slavery and promote the liberation of other peoples in the rest of the world. That is why we are getting involved in this battle of ideas and risk the allegations of sectarianism, dogmatism and purism. We have always been critical, and rightly critical, of self-proclaimed ‘leaders’, of chest-beating ‘revolutionary’ rhetoric. We are not, and will not be in the immediate future be an effective alternative to the Labour Party and the reformers. We speak of the socialist alternative in propaganda terms only. We must always maintain a sober and realistic appreciation of our true strength and weaknesses. But it is even more important to understand the need for initiatives in appropriate circumstances. Without exaggerating our own strength and influence, we have to understand this and act accordingly. Our question to fellow workers is “What is the next step?”

An early socialist slogan was ‘Educate, Agitate, Organise’. It is also a valid slogan for today and beyond. How capitalism works today strengthens the case for socialism. We need a different form of society, one in which working people get together to decide collectively and democratically how the world’s resources should best be used. Productive resources shouldn’t be controlled by cliques of overpaid CEOs and their political cronies, but by the people who actually do the work of producing the goods and services on which we all depend. Rather than an economic system that relies on capitalists betting on which way the market will go, we need one based on democratic planning whose aim is to match resources to the real needs of ordinary people. The case for socialism is even stronger today than it was in the past. This conception of socialism has to be reflected in how we organise, a party based on the idea of a socialism which workers make for themselves.
By ajohnstone at December 02, 2015