Understanding the world we live in 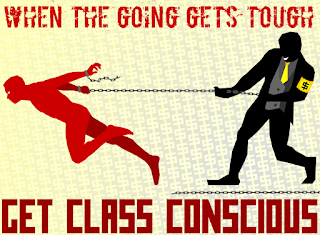 It is an old analogy but still serves well to make the point. Society is suffering from the rotten, cancerous, fatal maladies of capitalism and that all the best schemes for bolstering the system are, at their best, palliatives that cannot cure. We either resign ourselves to the progressively worsening malaise of the capitalist system or under-go surgery to lop of the diseased parts of society in an operation known as social revolution to allow humanity a new lease on life.

Socialism must be self-managing. The producers must hold the real decision making power over what they produce. This power must be exercised in a completely democratic manner. Socialism must be created by the majority, by every worker. Socialism is not simply about more efficient economic planning, but about what type of planning, by whom and for whom. Where the chains of capitalism are forged, there they must be broken. Only thus can socialism be created. Socialism has a straightforward attitude to the existing state, which is a state of the exploiting class. It must not worshipped. There have been many thinkers who saw socialism as simply the extension of state power and state ownership. But not Marx and Engels. Proponents of State ‘socialism’ negate of the principle of self-emancipation and deny the very possibility that the workers can organise themselves. Advocates of nationalization looks to an agency outside and above them – the existing state – to solve their problems for them. Capitalism itself was compelled, in its own development, towards some form of ‘socialisation’ of production but workers remain, as they were before, the objects of exploitation.

A prerequisite for the conversion of today’s society to socialism must be the conquest of political power by the working class. In order to be able to fulfill this task, the working masses must be fully aware of their goal and become a class-organised mass.

To destroy capitalism, we need to understand exactly what it is and what drives it. In order not to starve, the worker, who possesses or controls no means of production, must sell her or his labour power to the capitalist. (By the way, this predicament is not an accident, but has been engineered through systematic historical dispossession such as the Enclosures)

This labour power, which will be used to produce commodities for the capitalist, is itself sold as a commodity. The price (paid as wages) is not based on the value of the commodities that will be produced with it (it is completely unrelated to that, actually), but instead it’s roughly based on the cost of its own production: the worker’s subsistence, his or her food, shelter and other necessities.

During the work day, workers produce more value than the amount of wages they receive. Let’s say that during the first hour they manufacture cars or shirts or whatever that are equivalent to the value of their wages. That means for the rest of the day, 7 hours or more, they work for free, creating new value for the economy. This new value is not paid for. In other words, their labor power is being stolen. That’s exploitation, which is made possible by the wage system.

That new value, called surplus value, is privately appropriated by capitalists, who own, control, and manage the entire process of production and distribution for the whole society.

The capitalists’ ownership of the means of production—the raw materials, factory and machinery, which it obtained through previous cycles of exploitation or outright raw dispossession through war or other means—is used to justify depriving workers of any legal right to keep the product. So the capitalist takes everything that the worker produces.

Surplus value isn’t simply a quantitative sum. It is a social process, a class relation. The entire society is set up to facilitate its extraction, and the entire system depends on it. Surplus value is the origin of all other forms of capital and of concentration of capital. The process benefits only capitalists, never workers. The workers receive barely enough to survive, and when it’s slightly more than that, it serves as a bribe to keep quiet. The amount of wages and of surplus value is constantly contested, determined by class struggle.

This arrangement establishes the fundamental contradiction of capitalism as capital vs. labour, embodied in the conflict between the capitalist class and the working class. These two classes are antagonistic – the exploitation of one results in the accumulation of wealth for the other.

The surplus value is re-invested and becomes new capital. Surplus value is capital. If all capital accumulation ultimately depends on the extraction of surplus value, then the end of capitalism will require that this process be stopped.
By ajohnstone at December 14, 2015

Can someone bring this back to me so that I can understand from my individual view point? My wife and I have been putting in extreme hours to get a small business off the ground because we want to have more control over how we manage our work and we want to add value to society with our goods. That said, it is not easy to get a business off of the ground and we have had to risk most of our resources to do it and expend a lot of energy and ingenuity. in a purely socialist society, how are we able to do that and how are we compensated for our efforts - Thanks in advance.

Being self-employed is one of the ways many try to mitigate the effects of wage-labour and the domination and control of management and bosses. But anybody who has tried to succeed in a small business or by being self-employed recognises that the major threat is from the competition of big companies who drive the conditions of whatever sector of commmerce someone enters. The scale ofeconomies the size and scope of the resources available to the "Big Boys" forces ordinary mortals like ourselves to simply over-work and drive ourselves mercilessly to stay afloat and viable. Capitalists along with the State's bureaucracy are no friend of any who wish to try to gain the security of going into business for themselves. They have the supply chains, the investment and loans for expansion and budgets for advertising and cutting prices for loss leaders to put the small-fry out of business. Just ask a High St shop what happens when a supermarket giant moves in.

Many Socialist Party members have tried to find a suitable niches within capitalism to have, as you say, some degree of control over their lives and have themselves opened small businesses from booksellers to cafes to dealing in antiques, recollecting from some i know.

I think some individual members choose areas in life that may well continue in a socialist society, obviously without the exchange economy but a part of providing some level of service. Let's be clear that the Socialist Party is not advocating socialism where forms where buying and selling continues and where people work for a wage to survive, rightly called wage slavery.

Work inside socialism will be for the benefit of those who work and for the community they live in and serve, who also will share in much of the collective labour necessary to produce for use and not for personal or government profit.

I have no idea what your business is but it will either be something that is worthy of providing the well-being of people and will be recognised as such or it may well be parasitical upon society and have no social usefulness except under capitalism and so will disappear with socialism and you and your wife will be free to explore other types of work.

In any case whatever contribution to the work of society you were willing to make, you will have free access to the collective wealth of society.

This is interesting and I would like to formulate a vision of how all of this would work. Economies of scale are efficient and could be in the interest of society if there was appropriate distribution of the wealth generated from them. I am not sure how that would work out with regional interests - I have not thought enough about it. Who is doing the work of figuring out the details of incentives and governance / co-ordination and transition to your view of a new society? - I am in the Ottawa area.

You can't approach this from inside the mindset of capitalism which has 'the price of everything but the value of nothing'.
Here is an interesting read which dispenses with a lot of capitalist economic baggage.
http://www.worldsocialism.org/spgb/socialist-standard/1980s/1987/no-1000-december-1987/socialism-and-calculation

This is the link for our companion party in your part of the world. They would be pleased to hear from you.
http://www.worldsocialism.org/canada/

Thanks very much for the information. That was indeed an interesting read, having spent about 15 years as an analyst / project manager and estimated and initiated many projects using the financial methodology examined. I have contacted the Canadian wing and I await their response.