Forging the Weapons of Class War 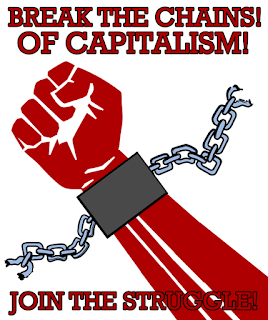 The economic and social system prevailing in the world to-day is known as capitalism. The dominating features of capitalism are the private ownership of capital, the production of goods for profit and the division of society into two classes, namely, the capitalist class and the working class. The land, factories, mines, railways and shipping, all the means of producing theworld’s wealth are owned by the landlord and capitalist class. The great mass of the people own nothing except their muscles and brains, that is, their power to work. Production is carried on not for the purpose of supplying the needs of the people but for the purpose of sale in order to realise a profit. Only those who have something to sell can get a living. Only those can obtain things who can afford to buy. This is the capitalist system.

The worker has nothing to sell but his or her labour power. He or she sells labour power to an employer for so many hours a day for a certain price, that is, wages. Since one cannot separate labour power from one’s body it comes to this, which a workers actually sells themselves like slaves. We socialists, call the workers under capitalism, “Wage slaves”. Wages are determined by what it costs to keep a producer and family. How many workers do you know who can save out of their wages? They may be able to put something by in a good season, but bad seasons come and the savings are gone. It is a fact that the average worker is not more than two weeks removed from penury. The capitalist will only buy labour if he can make profit out of it. Just compare the value of the goods you turned out in a day when you were in the factory, and what you received for your work. The difference between the two is the employer’s profit. Profit is the result of the unpaid labour of the worker. Under capitalist workers are continually robbed of the results of their labour. The capitalist will compel the worker to work as hard and as long as he or she can, for as little money as possible. Even through the efforts of the best-organised trade unions wages never rise higher than the cost of living. And even this is not secured.

What does capitalism offer people? A life of toil and sweat, a bare subsistence. Always the dread fear of the sack. A drab, colourless existence and when unable to work any longer, to be thrown on the scrap-heap. However the alternative, socialism, offers everything which industries produce goes now not to enrich a small parasitical section of the community but the whole community. The whole world becomes a huge cooperative society, and the people, instead of slaving to enrich the idle investors, creates wealth without having to pay tribute to speculators and profiteers. Worker takes a direct part in the management of work, no longer a slave of another man, but a member of a great community of labour.

We are entering a period of new struggles and for these we must be prepared. Together we shall build a worldwide Co-operative Commonwealth. The Socialist Party scorns to hide its aims. Under capitalist society it exists to fight against the exploitation of those who toil by hand and brain, and to strengthen the political understanding of the need of ending capitalism and establishing socialism. We urge that there be no pessimism. Let there be no sense of frustration. The future is ours. And there are those of us who were never more optimistic, never more certain, never more determined to achieve the goal of socialism than we are on the final days of 2015. The stronger the Socialist Party becomes, the stronger the whole working-class movement becomes in its struggle against capitalism and its efforts to establish socialism. We stand at the threshold of great class battles. Raise high the people’s flag, our scarlet standard of freedom! Let us take the offensive in the battle of ideas, which is always a part of the daily struggle against capitalism. For there must be no mistake our class enemies do not neglect the weapon of propaganda. They mobilise the whole machinery of the media and press into service press every kind of charlatan.  The more the class struggle develops, the more capitalism will spew out various breeds of leftists, mouthing revolutionary phrases to entrap the workers and keep them in the capitalist net. We know that social changes are not made by leaders, but by great mass movements, and not stimulated by poseurs and political one-man bands, but by organised workers, free men and women. And therefore we will go into great battles, and we will emerge strengthened, with greater numbers.