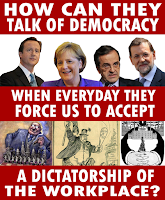 Socialism can be defined as a system in which production is geared toward human need and not for the private profit for the few, where everybody can have a say in what is produced, how it is produced and how it is distributed. Decisions will be made in the workplaces and communities as a whole, developing the capacities of all. Social ownership of the means of production does not mean the state owns all enterprises and directs social life. There is no class or other form of elite that stands above society making the decisions. We are talking about a different world than the one we live in now. A blueprint for such a future is not possible; a better world will be created in its making. But we can indicate the direction society will take with a compass. Tangible examples and concrete ideas are necessary if the vast majority of humanity are to break free from their acceptance of capitalism as “common sense” or the “only alternative.” Capitalism’s staying power rests on the widely held belief that there is no other option to it.

People’s need to sell their labor power — that is, their need to obtain employment in order to survive — and the creation of perpetual unemployment creates a dependency on capital that has continued for so long that the capitalist mode of production comes to be seen as “self-evident natural laws.” Struggles are therefore contained within the confines of capitalism. Bargaining over wages and working conditions can become contentious, but this is never more than bargaining over the terms of exploitation; the relations within this system are never touched. We are told we are incapable of making decisions and thus unable to develop ourselves. We are also kept divided along gender, racial, religious and national lines and fighting among ourselves, helping keep capitalists in power. Who is this working class? It everybody who has no choice but to “sell their labour power” — those who cannot survive other than by hiring themselves to a capitalist. Those who have a job, those out of work and those who survive in the informal sector.

Thus an alternative common sense must be constructed that can only be built from the bottom up. The Communist Manifesto said:
“All previous historical movements were movements of minorities, or in the interest of minorities. The proletarian movement is the self-conscious, independent movement of the immense majority, in the interest of the immense majority”
And also in the Manifesto they explain “The first step in the revolution by the working class, is to raise the proletariat to the position of ruling class, to win the battle of democracy.”
Marx and Engels later made clear that “the emancipation of the working class is the task of the workers themselves”

They never taught that nationalisation signified the establishment of socialism. That’s not stated by Marx and Engels anywhere. All the great Marxists defined socialism as a classless society—with abundance, freedom and equality for all; a society in which there would be no state, not even a democratic workers’ state. Capitalism, under any kind of government—whether bourgeois democracy or fascism or a military police state—under any kind of government, is still capitalism and a system of minority rule, and the principal beneficiaries of capitalist democracy are the small minority of exploiting capitalists; scarcely less so than the slave-owners of ancient times.
The Communist Manifesto said: “In place of the old bourgeois society, with its classes and class antagonisms, we shall have an association.” NB: “an association”, not a state—“an association in which the free development of each is the condition for the free development of all”
In the old days, many socialists used to give a shorthand definition of socialism as “industrial democracy”: the extension of democracy to industry, the democratic control of industry by the workers themselves, with private ownership eliminated. That socialist demand for real democracy was taken for granted an the time when the socialist movement was still young and uncorrupted.