Everything is One Thing – Capitalism 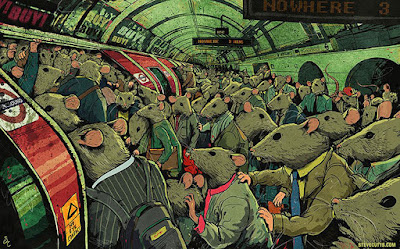 There is currently a historically low level of strikes in the UK and the USA. At some point that is going to change, but it's difficult to say where or when.

We live in an age of threats to global peace and stability. The myths and illusions concerning the Labour Party have an extraordinary tenacity. Despite betrayals by its leaders, repeated electoral disasters, it has been the renewed confidence of each new generation that has kept the Labour Party alive all these years. The facts of life have been against them but their self-sacrificing work has ensured the continuation of the party and has never altered their conviction that continuous effort would bring about the conversion of the Labour Party to a firm socialist commitment. Yet in the real world, capitalism hooks up with any government that protects its investments - from military dictatorships to Islamic republics to whatever you want to call the Labour Party.

Corbyn’s supporters reflect this naïve trust in the party. Decades ago most biggish towns had their local labour paper, produced by the constituency Party, they had an active Trades Council who could count on a wide support. How many of such papers exist today? Are there any Trades Council that is more than just a rubber stamp these days? Those who continue to believe in the viability of the Labour Party as a political force for the achievement of socialism are today confronted with more serious questions than ever before. Evidence of Labour governments being weak, timid and wholly reformist is very evident everywhere and at every level. The Labour Party is a massive institutional obstacle to the achievement of socialism.

Nor can any review of the Left outside the Labour Party can offer anything but yet more pessimism. The combined political impact of these groups is very limited, except in those situations where the mainstream of the labour movement is also moving in their direction. Workers are more likely to support the status quo or reactionary ideas when we are being cowed by our bosses and divided against each other. It's when we start figuring out how to come together and resist that many of us become more politically open to radical politics.

What we need are new styles of approach as socialists: new methods of organisation: new forms of socialist agitation; but how and in what ways the old techniques and organisational forms can be supplanted are not easy questions to answer. Words alone will not suffice. There must, it should go without saying, be intensive discussion of the problems at all levels; but it will be in the practical achievement of unity and common action that the shape and form of the future movement will emerge. It will be an exploration in practice. The workers would do a much better job, not the class as it exists right now, but the one that can come into being through future struggles. Socialism isn't based on the premise that people are the same, only that they have the same rights and resources. Socialism is a society run by and for people. Socialism could liberate billions of individuals. Socialism is about extending democracy - by extending popular decision-making into arenas currently controlled by unelected institutions like corporations by creating many new democratic institutions such as neighbourhood assemblies and workplace committees. Capitalism keeps pushing new generations to look to an alternative. Socialism is about expanding social movements into a full participatory democracy.

For eons our ancestors knew all about how to get along without killing each other and destroying the environment. Only with the advent of class society did competition and "winning" replace cooperation and sharing as the primary ethos. And now class society has finished its evolutionary mission, allowing us to return to our anthropological roots. People don't realize that they have been conditioned to suspend their common sense. We don't understand that capitalism is invalid but sustained by ignoring its horrendous side effects e.g. the poor, crime, endless war, disease and destruction of ecospheres. Everything is One Thing – Capitalism and there is only one solution – Socialism. The Spanish left party, Podemos, had a slogan “one foot in the parliament, one hundred on the streets.”