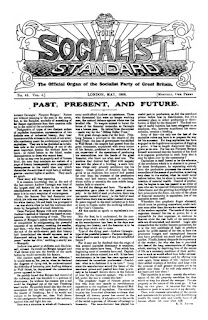 From the May 1908 issue of the Socialist Standard

Andrew Carnegie! Pierpont Morgan! Names not without meaning to the man in the street, but, to the Socialist, symbolic of something of far deeper significance than their mention calls up in the mind of the uninitiated.

Designative of types of two distinct orders of capitalist dominators, representative of two definite eras of industrial history, they bear inconvertible witness to the truth of our scientific conclusion anent the evolutionary nature of capitalism. They are to be cherished as invaluable aids to the understanding of one of the most important lessons the workers have to learn; as raised letters to the blind, ocular demonstration to those who cannot hear.

As far as may ever be properly said  of human kind, the men they nominate are makers of a page of history incomparably more pregnant of consequences to the world than any which chronicles the activities of royal hero or military genius—ancient lights or modern. They mark an epoch.

Their story will bear repeating.

It is common knowledge that at the end of the last century Andrew carnegie was head of the largest steel rail factory in the world, an establishment with an output so vast that to state it is to court suspicion of extravagance.

Here the famous Scot had dominion over which his rule was complete; his word was law, his whim destiny, life and death his prerogative—as was shown when he had his workmen shot down by bargeloads of armed detectives.

Came Pierpont Morgan with new conception. Andrew's method of business was based on competition—the undercutting of rivals. The very essence of Morgan's system was the elimination of competition by amalgamating the powerful concerns of an industry, crushing the smaller, and then,—why then Competition had reached the end of the strife-strewn path that history had foreordained she should traverse, and is discovered taking her ease at least, sitting in peace "under her olive," suckling a sturdy son—Monopoly.

Andrew was asked to abdicate, and, like himself, refused. He would see Morgan hanged and Wall Street sink into the bowels of the earth before he would surrender his factory.

Did Andrew speak without due reflection? It would seem so, for, just as, when he declared the disgrace of dying rich, he underestimated the difficulty of becoming poor, hurling defiance at Wall Street, he depreciated the tremendous power opposed to him.

He quickly found that Morgan had control of the railways, and was therefore in a position of dominance; for without his consent not a rail could be freighted out of the vast Pittsburg steel works. He quickly found also that the new conception did not wait upon the pleasure of the master of Pittsburg; for if he would not submit to be bought out, then Wall Street would amalgamate the remnants of the industry against him and fight him out.

Here was a situation in which all Pinkerton's army could afford Andrew no assistance. Those who threatened him were no longer working men, the natural defence against whom was the levelled rifle. No weapon existed to batter the forces of the financial monarchs, so Carnegie was a beaten man. he retired from the contest—made way for the "Billion Dollar Trust."

Now great change came o'er the land. Pittsburg became a province in the empire of the Steel Trust; the seat of government was shifted to Wall Street; the sceptre had passed from the great ironmaster, acquainted with every corner of his factory, proficient in the technics of his art, supervisor of the operations of producing his commodities, into the hands of the great financier, who knew not what steel was. The position that Andrew had filled with majesty was now the place of a hireling - a mere foreman whose only princely semblance was his salary. Great powers of direction had been given to an employee, but control had passed for ever from the overseer of the productive forces, and had become vested in outsiders, whose utility or necessity the most subtle imagination fails to conceive.

Nor did the change end here. The strife of competition gave place to the peace of monopoly. In the field of steel production there was one master instead of many; in the field of steel distribution there was one seller instead of many. So peace reigned in the steel industry as it does at times in Russia under the soothing influence of the Czar's Cossacks.

All this marks an epoch in capitalism's evolution.

Not the first, be it understood, for the merchant prince was a ruler in his generation, even as the manufacturer has been in the days now slipping into history, and the financier is to be in the days which are to come.

Type of the dying past—Andrew Carnegie; type of the youthful present—Pierpont Morgan; where shall we seek a type of the yet unfulfilled future?

For it may not be doubted that the reign of this present capitalist dominator is transient, even as the others have been. That which has beginning must of necessity have end. Capitalism has not always existed, nor will. It has been revolutionary in its time, has risen against and dethroned its immediate predecessor—Feudalism: what os to dethrone it in its turn? Long since the manufacturer seized the baton of the merchant prince and pushed him from power, only to be himself thrown down in the fulness of time by the financial upstart—who is there left under the sin to unseat this last?

The prophetic finger of Science points to him who even now stands in revolutionary opposition to the regalism of the financial Molloch and his phase of capitalism. For scientific inquiry has furnished abundant evidence that through all history power has moved in the direction of economy, of adjustment to the needs of the social organism, of ultimate advantage to humanity. The manufacturer has played his useful part in production, as did the merchant prince before him in distribution, but what necessary place, in either production or distribution is filled by the financier? The final vestige of useful function has been relegated to an employee, who, however munificent his remuneration, remains a hireling.

Irony of fate—the only use the last of the capitalist rulers can have is to prepare the way for his successor. For long capitalism has been engaged in the lugubrious occupation of digging a grave: it has at length discovered that this grave is its own. For has not Pierpont Morgan himself announced that the function of his kind is to organise production in such form that it may be taken over by the community?

Capitalism is itself to be the educator of the revolution which is to shatter it to pieces. Its latest development, by separating entirely from the productive processes the owners and controllers of the means of production, is making very clear to the worker, what he could never believe before, that he alone is necessary to the creation of material wealth. Control of production, he begins to see, has passed to an order of men who can be removed without any industrial disturbance, and the growing knowledge of this fact pronounces the doom, not only of the phase of financial monarchy in capitalism, but of the capitalist system itself.

Wherefore the prophetic finger aforesaid, which must be pointing somewhere, could indicate none other than the worker as the successor of the modern capitalist. The needs of the social organism demand his rise to power, for it is impossible for that organism to continue to flourish while the vast bulk of its component cells are ill-nourished and stinted. Logic also demands that the worker become paramount, for it is the very antithesis of logic to produce goods for profit instead of for use, to have the producers hungry and unemployed because they have produced too much and glutted the market. Finally, history demands the supremacy of the worker; for why else has it provided this last of the long concatenation of changes which, starting by depriving him of the means of life as necessary condition of their perfection to such as would afford him fuller subsistence and higher existence, end by offering him once again those means of life—radiant with their added wonders of fertility, and large with the promise of still greater wonders yet to be added unto them—if he will only stretch out his hand and take them?

The transition is so easy—merely the substitution of the old property condition for that which so long has played the usurper. Private property in the means of life must go. It has dug its own grave, it remains but for the workers to push it in and cover it up decently.

Then, with common ownership of the means and instruments for producing and distributing wealth the sound, sure and kindly basis of all human affairs let come what will.