The future is ours if we want it 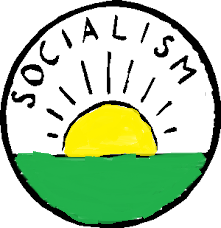 The situation facing workers is as grave as at any time in human history. Globally, the situation is dire. The world faces a catastrophic climate change crisis with potentially disastrous consequences for us all. Capitalism is responsible for taking the planet and its peoples towards the edge of the abyss. The whole history and experience of capitalism demonstrates that it is a system of crises and contradictions.

There is a mounting urgency to lift people out of hunger, poverty and disease. Our planet’s eco-system must be rescued before it deteriorates beyond the point of no return. Even under wasteful and destructive capitalism, the productive forces exist that could, if planned and utilised to meet human need instead of maximising capitalist profit, ensure sufficient food, nutrition, health care and education for all. Indeed, never before in history have the rapid advances in science and technology provided such opportunities for the all-round development of every human being. For as long as capitalist ownership of the economy exists, whether or not the so-called ‘free market’ dominates or the State monopolises, its operations will produce crisis, destruction, inequality and waste on an enormous scale. Capitalism’s drive to maximise profit leads it to turn every area of human need – food, clothing, shelter, healthcare, education, sex, leisure – into a market for the production and sale of commodities for profit. However, when sufficient profit cannot be realised, even the products and services to meet society’s most vital needs will not be produced.

Only common ownership can put an end to pointless and wasteful competition and duplication. The development and deployment of society’s productive forces would be planned in order to meet people’s real needs and aspirations. Jobs, houses and vital or useful goods and services would be created as the primary purpose of planning and production, not as the incidental consequence of maximising profits for shareholders. In particular, common ownership is the only viable basis on which energy can be planned and developed in an integrated way, to combat global warming and climate change while ensuring renewable power supplies. The only sure protection against climate change is the replacement of a society based on accumulation for profit with one based on production for need. But that will not come about if we wait for it.

A socialist society run in the interests of the vast masses of humanity, and not a tiny elite class of profiteers, is the only alternative. It is not pie-in-the-sky dreaming or just a “smarter” way of running things; it is the logical conclusion of capitalism’s development. Capitalism has itself laid the basis for transcending the misery to which it condemns humanity. It long ago built up the economic productive forces—industry, technology and a globalized economy—to the point where the potential exists to produce an abundance of all need resources. But that potential remains trapped by capitalism’s pursuit of profit. To redirect society’s productive forces toward producing in the interests of the majority, control of the State and the economy will have to be captured from the capitalists. This cannot be achieved in one country—it will take revolutions across the world.

By planning economic production in the interests of the masses of humanity, workers would do so much more than just improve their immediate living conditions. Class society first arose in history as a result of a scarcity of necessary goods. The struggle to control small surpluses of food, for example, saw society divide into a tiny elite who enjoyed the profits of rule over an exploited majority. Scarcity continues to underpin capitalist class society, driving nationalism and racism as the way capitalist forces rally support in a fight of all against all for dwindling resources. By producing an abundance of necessary goods for all, workers would undermine the very basis for the existence of classes. Necessary work would be divided equally among all. And the introduction of labour-saving technology, instead of creating unemployment as it does under capitalism, would be used to shorten the work-week and free peoples’ lives for greater leisure. In such ways the basis would be laid to the development of a society free of all forms of exploitation and oppression. Capitalism has created the class with the potential to overthrow it: the working class. With no way to survive without working for and being exploited by the capitalists, the working class has no fundamental interest in maintaining the system. Drawn from across the world and forced into cooperation and labor in their jobs, the working class can turn this organization against the capitalists in collective struggle. Through the experience of such class struggles, more and more workers can come to revolutionary socialist conclusions and consciousness.
By ajohnstone at December 07, 2015